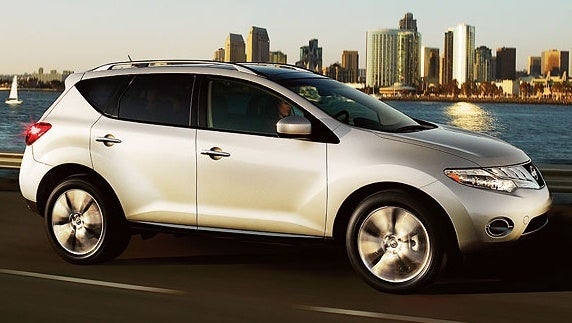 Its price falls in the middle of the crossover class, but its refined and roomy interior, top-end drivetrain, smooth and confident performance, and bevy of technologies put the 2010 Nissan Murano among the class elite.

The 2010 Murano's exterior style lines are polarizing, and it offers less cargo space than many others in its class.

With its artful shape, sumptuous cabin, and easy ride, the 2010 Nissan Murano is graceful. Drop the gas pedal, power through a turn, or test its all-wheel drive in the mud, and you’ll see the powerful side of this SUV that demands your attention.

Like a building designed by Antoni Gaudi, the 2010 Nissan Murano curves where straight is the norm. The Murano’s rounded style distinguishes it in a class full of boxy shapes, but it also polarizes. You're either drawn to the uniquely curvy crossover or not. But if the curvy look appeals to your taste, you will likely be enthused by what you find upon closer inspection - beneath its edgy styling, the Murano offers athletic handling, a polished ride, and an upscale interior that borders on that of a luxury sedan.

The Murano has six trims – front-wheel-drive S, SL, and LE, and all-wheel drive S, SL, and LE. They’re all powered by a 265-horsepower, 3.5-liter V6 and a continuously variable automatic transmission. The Murano is built on Nissan’s "D" platform, also used by the Altima sedan, which is part of the reason for the Murano’s car-like performance. It has two rows of seats and holds five passengers, as opposed to the three rows some manufacturers squeeze into crossovers so they can claim it seats seven, even though five of those seven would have to be children or shrunken.

The Murano underwent a significant redesign for 2009, so this year’s changes are relatively minor. The LE trim level now comes with a front-wheel-drive option (it was AWD only in the past) and comes standard with a dual-panel sunroof. All trims now have standard keyless ignition and entry, the SL trim comes standard with roof rails, and a security system and the option packages have been reorganized.

Under every sleek Murano hood is a 3.5-liter, 24-valve V6 engine that produces 265 horsepower at 6,000 rpm and 248 lb-ft of torque at 4,400 rpm. That engine's mated to an Xtronic continuously variable transmission (CVT), gets 18 city/23 highway mpg for both FWD and AWD trims, goes from 0-60 in 7.8 seconds, and has a 3,500-pound towing capacity. Nissan recommends using premium gas for the Murano.

The engine and transmission are universally praised by critics. The V6’s 248 lb-ft of torque easily moves the 4,000-pound Murano in any situation, and the CVT seamlessly moves between gears to provide a smooth and effortless ride and make the most of the Murano’s 265 horses.

It’s hard to find criticism concerning the Murano’s performance. The Murano accelerates with noticeable power and is one of the quickest vehicles in the midsize SUV class. Its throttle response is impressively smooth and delivers what you need whether you’re driving around town, in the hills, or on the highway. The speed-sensitive power steering is effectively adaptable as well and offers a light yet precise feel. The four-wheel antilock brakes with electronic brakeforce distribution and brake assist are excellent according to testers and provide straight and reliable stops from most speeds.

The independent front strut suspension and rear multi-link independent suspension (supplemented by stabilizer bars in front and back) deliver a very refined ride that's surprising for an SUV. The Murano feels secure yet supple on the highway, but it’s also sporty enough to also handle some spirited driving.

If the road conditions are difficult, or if the road has turned to dirt, the Murano’s intuitive AWD helps maintain these high handling standards. Its AWD system reacts to changing conditions, speeds, and driver input and will allocate power to individual wheels best suited for dry, wet, or icy roads while cruising, cornering, or accelerating.

The Murano’s cabin received a comprehensive makeover during the 2009 redesign, and those stylish changes remain this year. A proliferation of soft plastics, padded surfaces, and finely stitched leather gives the cabin a luxurious air, it has a generous helping of standard hi-tech features with more available through optional packages, the gauges and controls are ergonomic and lit with a chic amber light, and the systems are intuitive to use.

Not only is the interior of the Murano refined and well appointed, it’s roomy and comfortable as well. The front seats offer excellent headroom and legroom and have extra-wide seatbacks. And with a six- or eight-way adjustable driver’s seat and the tilt and telescoping steering wheel, owners should be able to find a comfortable position. The rear seat provides as much or more room than most in the class, thanks to Nissan’s decision not to cram in a third row. Cargo space behind the second row is 31.6 cubic feet, and with the second row folded flat that number jumps to 64 cubic feet.

Not surprisingly, owners love the second looks that pile up when their Murano drives down the street. They also universally praise the technologies and convenience features, which owners call easy to use and understand. I found almost no complaints about performance, but there weren’t a ton of compliments either.

Many praise the Murano's seating, but there are some who don’t like the feel of its seats, so perhaps taking an extended test drive would be wise before making a purchase decision.

Users ranked 2010 Nissan Murano against other cars which they drove/owned. Each ranking was based on 9 categories. Here is the summary of top rankings.

Have you driven a 2010 Nissan Murano?
Rank This Car

My car suddenly left me stranded, it starts but when I go to change the gears it won’t move, mechanic scanner shows massive air flow sensor and output transmission sensor, I had those replaced, bu...

I've got a 2010 Nissan Murano with 69,000 miles. It hasn't ever had the CVT transmission fluid changed. I just had transfer case and differential fluids changed and the Nissan dealership service te...

536 views with 5 answers (last answer about a year ago)

Dash Light Is On. Looks Like A Horseshoe With An Exclamation Mark In It. ...

565 views with 4 answers (last answer about a year ago)