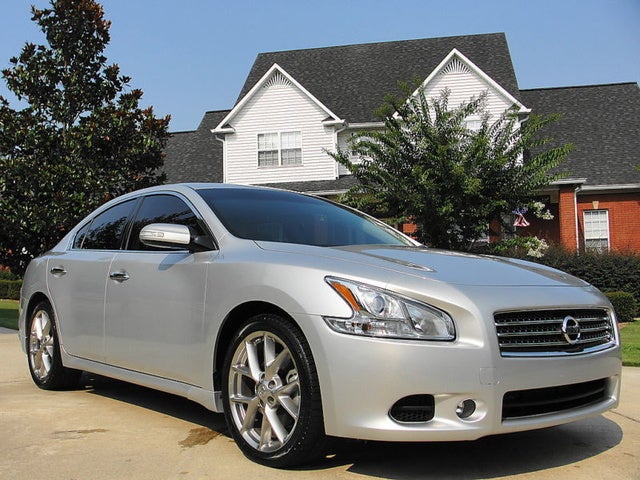 The 2010 Nissan Maxima offers handling that leans toward sport without imparting an overly harsh ride and new styling that seems to impress.

A lack of low-end grunt and a slightly cheap interior leave many scratching their heads with the 2010 Maxima. 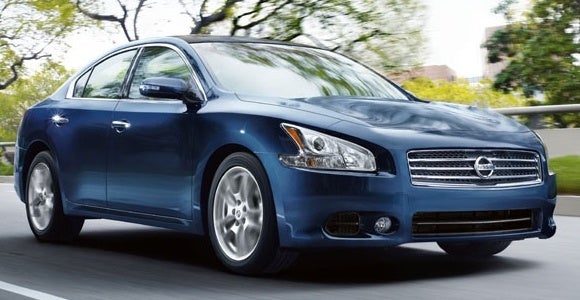 The 2010 Nissan Maxima is an interesting compromise, with luxury pretentions and sport aspirations that both seem to have come out of the oven prematurely. This isn’t necessarily bad, as long as you don’t expect real wood-grain accents or race-car handling. The Maxima is the perfect example of commuter compromise, but lacks the personality of either extreme.

Starting its American life in 1976 as the Datsun 810, the Nissan Maxima has been in continuous production since in one form or another, going through many changes along the way. Today, the Maxima is a four-door, front-wheel-drive sedan, offered in 3.5 S and 3.5 SV trims, both equipped with the same engine and transmission. No changes will be seen in 2010, following a redesign for 2009. 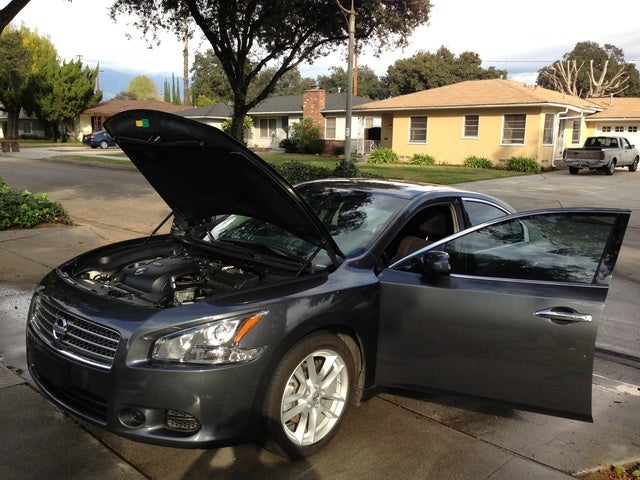 A 3.5-liter V6 engine powers both Maxima trims, with 290 hp and 261 lb-ft of torque. That torque doesn’t seem to help much, despite coming in at 4,400 rpm, as the Maxima is a bit of a dog at the line, taking its time to spool up and display all its power. Once moving, the Maxima is not short on power at all, with plenty in reserve for climbing, passing, and the like. The CVT is a new animal that some will have trouble adjusting to, with its continual power delivery, although the optional paddle shifters are available to ease the transition for some. The Maxima manages 19/26 mpg according to EPA estimates, but requires premium gasoline.

For what is marketed as a four-door sports car, the Maxima fails to impress on several levels. It’s certainly no dog, it’s just not very sporty. Rough roads jar and jerk, passing every inconsistency through the wheels and chassis right to occupants. Corners are negotiated, but with a bit of drama. The optional Sport Package adds a sport suspension and 19-inch wheels, among other options, and does show an improvement in handling. Perhaps more impressive is the seeming lack of penalty from upgrading here, with neither the suspension nor the larger wheels increasing the harshness of the ride.

Maxima seats have a nice blend of comfort and support, with the SV trim offering additional reinforcement through thigh extensions. Either trim has expansive space for anyone 6 feet tall and under, and even many of those passing the 6-foot mark will find adequate room for head and legs. The rear seat is less spacious, with headroom compromised by the sloping roofline, legroom hindered by the front seats, and a middle seat that is unusable for all but small children.

Controls and gauges are well-placed and intuitive, although the display screen remains in place even in cars not equipped with the navigation system, a seemingly superfluous feature. Wind and tire noise seem to permeate the cabin slightly, although the Sport Package adds additional sound insulation, strangely. Interior materials could also stand an upgrade, with many complaints being heard from owners and reviewers alike.

The 2010 Nissan Maxima has a five-star rating in each category of the NHTSA’s tests. Safety features include six standard airbags, four-wheel antilock disc brakes with brake assist, an anti-skid system, and a tire pressure monitor.

Maxima owners lament its lack of low-rpm acceleration and moderate fuel mileage, especially considering the requirement of premium gasoline. An interior that seems to have sourced most of its materials from the discount rack is additionally frustrating, but overall the Maxima remains a success, with fresh styling and overall impressive performance.

CharSchu The 2010 has two service bulletins on the CVT - had both performed on mine under warranty, and found the driveability and off the line torque to be vastly improved! Not sure what critics are looking for but my Maxima easily spins the tires off the line and the torque comes on strong and quick! I will be replacing my tires soon and will be looking for those with better dry and wet traction for better hook-up on take off.

Users ranked 2010 Nissan Maxima against other cars which they drove/owned. Each ranking was based on 9 categories. Here is the summary of top rankings.

Have you driven a 2010 Nissan Maxima?
Rank This Car

My Car Won't Move When Put Into Gear

I have a 2010 Nissan Maxima and it won't move when I put it in drive, what could be wrong with it? Also, my battery, brake, VDC, and ABS lights are on as well.

How To Disengaged Locked Steering Wheel On Maxima 2010?

I have a Maxima 2010 that recently starting to make some noise near and it got louder as the engine rpm went up. I noticed smoke coming from under the hood and it wasn't collant. After i pulled ov...

Maxima 2010 , The Engine Shuts Down While Driving?

My Maxima 2010 for the past two month it started this issue which driving me crazy. The engine shuts off while driving regardless for the speed. The breaks works fine the steering becomes heavy to...

What is causing metal squealing coming from rear wheel. It's not constant and usually when I stop and start back it stops. It needs brakes I know.