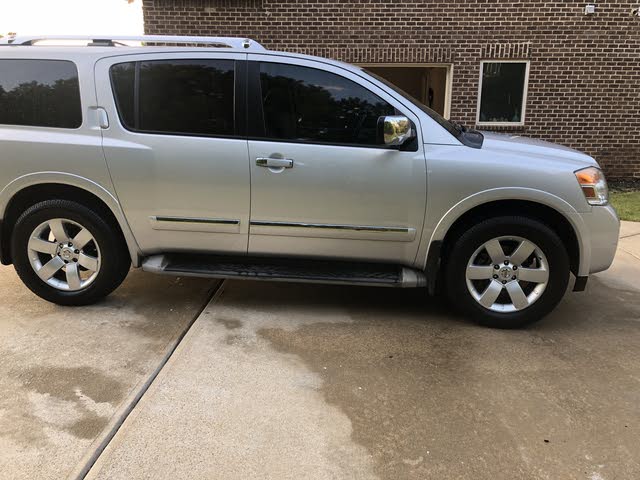 The 2010 Nissan Armada’s truck-like handling, poor gas mileage, and mediocre cargo area, combined with a waning enthusiasm for its breed, may conspire to sink this fleet as soon as next year.

No doubt the 2010 Nissan Armada is a reliable and well-constructed full-size SUV offering plenty of features, decent off-road abilities, and a good bit of hauling capability. That said, this is the era of the economical crossover, the family-friendly minivan, and the versatile pickup. Facing numerous and more highly regarded competitors, the 2010 Armada may have overstayed its welcome.

Big, brash, and decidedly anachronistic, the 2010 Armada is Nissan’s largest SUV. Rumored to be in its final production year, the Armada offers three trim levels for 2010, the base SE, mid-level Titanium, and top-shelf Platinum. All three trims offer third-row seating with split-folding rear seatbacks, allowing 97 cubic feet of cargo room when folded flat. Armadas offer loads of standard features, and all are available with either rear-wheel (RWD) or four-wheel drive (4WD).

After a significant upgrade in 2008, the 2010 Nissan Armada is essentially a carryover from ’09. The biggest changes for 2010 include body-color side moldings with chrome strips, some tweaks to the interior trim, and standard front side-impact airbags across the line. Unfortunately, complaints by owners that exterior color choices are at best uninspired seem to have gone unheeded.

Gas mileage for the 2010 Armada is another concern for those looking with trepidation at rising prices at the pumps. The Armada’s available Flex Fuel engine may mitigate this problem, but not by much. The Armada’s weight and size not only inhibit fuel economy, but may cause some stressful moments on narrow city streets and in crowded parking lots, and drivers should forget about underground parking. 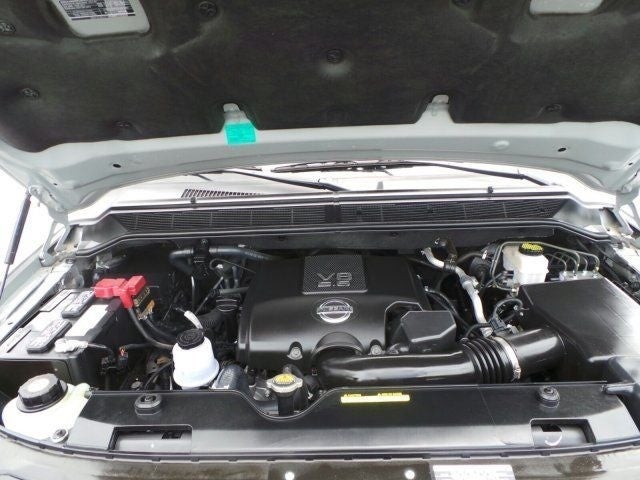 One engine is offered with the 2010 Nissan Armada, a DOHC 5.6-liter variable-valve-timed (VVT) V8 that, in combination with the standard (and only) five-speed automatic transmission with overdrive, puts out 317 hp at 5,200 rpm and 385 lb-ft of torque at 3,400 rpm. This same engine is also available in a Flex Fuel version (FFV), enabling it to burn E85 ethanol-blended gasoline. Though capable of hauling 9,100 pounds of trailer, the 5.6-liter V8, even with its VVT, is a serious gas hog, with an EPA rating of 12/18 mpg.

Most professional reviewers find the 2010 Armada’s V8 a capable performer with reasonably potent acceleration and plenty of passing and merging power. The only available transmission is described as slick and glitch-free, with the tow/haul mode a blessing when hauling significant weight. One reviewer did note, however, some touchiness in the Armada’s throttle, leading to a somewhat jerky ride around town.

Equipped with a four-wheel independent suspension, front and rear stabilizers, and double-wishbone construction, the 2010 Nissan Armada is at least reasonably well-mannered both on and off road. Despite its Titan-based underpinnings, virtually all reviewers find the 2010 Armada to smooth out most bumps and to have less body lean and noseplow in corners than much of its competition. The load-leveling suspension, standard on all trims except the RWD SE, is mentioned by many professional reviewers as a godsend.

Most reviewers note acceleration is more than adequate with the 2010 Armada, and braking is sure and steady. Professional reviewers, however, seem to be divided regarding pedal feel when braking, though nearly all agree that the Armada’s steering is tight, though a bit slow to react to input and somewhat clumsy during parking maneuvers, and just fine on the highway. Ride and handling seem similar with the 18-inch wheels, standard with the Armada SE, and the 20-inch wheels on which the Titanium and Platinum trims roll.

The on-demand-4WD-equipped Armada trims feature a center limited-slip differential, auto-locking hubs, and electronic hi-lo gear selection that combine for a superb off-road experience, especially with its high-stance, low-low 4WD gearing, and standard skid plates. Though the Chevy Tahoe and Toyota Sequoia have been described as smoother on-road performers, most reviewers agree that the 2010 Armada outperforms much of its competition off the beaten path.

Controls and gauges on the 2010 Nissan Armada are described by most reviewers as large and well marked, easy to read and recognize. Due to the Armada’s size, however, a few of the audio and climate control devices may be a bit of a stretch for some drivers.

Options for the 2010 Armada range from a Class IV tow hitch (available for all trim levels), satellite radio, and the Bose premium audio system for the SE trim, to a power-tilt moonroof and rear-seat DVD entertainment for the Titanium, to leather second-row captain’s chairs for the Platinum trim level.

Consistently a top scorer in safety ratings, the 2010 Nissan Armada rated five stars in National Highway Traffic Safety Administration (NHTSA) testing for driver’s safety, and four stars for passenger safety. The Insurance Institute for Highway Safety (IIHS) has yet to test the 2010 Armada.

A lack of owner reviews of the 2010 Nissan Armada this early in the model year forces a look to the 2009 Armada reviews, where poor gas mileage is the first complaint owners have. Several owners question why Nissan doesn’t offer a more economical six-speed automatic transmission for the Armada, yet things haven’t changed for 2010. Truck-like handling is another issue with the ’09 Armada, doubtless due to its Titan-based chassis. Further downsides owners note with the ’09 Armada are poor access to the third-row seats, and, when passengers finally do get to the third row, they find that it’s designed for, essentially, small children and pint-size pets. Finally, owners find the ’09 Armada a distinct challenge to drive – and park – in the city.

Owners, however, are quick to praise the ’09 Armada’s quality build and reliability. Performance, V8 power, comfortable ride, and, particularly, the rear-view camera system, in addition to the plethora of standard features and options draw positive reviews from owners of the ’09 Armada. Finally, the Armada’s size and styling, not to mention acres of cabin storage space and its off-road capabilities, leave owners for the most part more than satisfied with the Nissan Armada.

Have you driven a 2010 Nissan Armada?
Rank This Car

I have a 2010 Nissan Armada, when I turn on the heat it blows cold, or luke warm air. I also hear a clicking noise for about 30 to 45 seconds after I stat it up. What cause my heat not to work, and ...

I have a 2010 Nissan armada the heat only works on the driver side but will not work on the passenger side or in the back. Need solutions to problems

Why Is There No Heat In My 2010 Nissan Armada

2010 Nissan Armada Has Mushy Brakes, What Is The Problem

When I take my foot off the accelerator, the engine slows down very quickly. It is almost like you were down shifting into a lower gear. It does not "coast". The dealer has checked it twice and say...