Cramped rear seating, a noisy engine, glitches in the available navigation system, and a complex and often expensive options structure dulls a bit of the 2010 Altima’s luster.

The 2010 Altima is a solid, family-oriented automobile with a spiffy look and a flair for the dramatic. Recent upgrades have given it a leaner, meaner appearance, while upgrades in cabin technology mean a more pleasing driving experience. This sedan shouts presence, pizzazz, and punch, while whispering value and efficiency.

With a nip here and a tuck there, the 2010 Nissan Altima struts back into the hearts of those looking for a sporty yet family-oriented sedan at a sensible price. With its redesigned nose, as well as a number of safety and technological improvements and a leaner trim lineup, this perennial overachiever, if nothing else, reminds the folks who build the Toyota Camry, the Honda Accord, the Ford Fusion, and the Mazda6, et al, to keep their heads in the game. One significant improvement to the 2010 Altima is the addition of stability control to the list of standard safety equipment; this, apparently, comes in response to complaints over the years that with no all-wheel-drive availability, this ordinarily steady sedan could become somewhat less so under less-than-ideal conditions.

Legendary for its alert handling and robust chassis, the 2010 Altima sees the replacement of the 3.5 SE and SL trims with the 3.5 SR, which leaves five trim levels, the base 2.5, midlevel 2.5 S, the 2.5 SL, the top-shelf 3.5 SR, and the Hybrid. The 2.5 SL is, according to Nissan, actually an option-laden 2.5 S, thus is left out of the listed trim lineup in a few reviews and added to the options packages instead. Also for 2010, Nissan has decided to dispense with the sedan’s available manual transmission, though there are those who feel the six-speed stick to be a bit of a clunker. In any case, the continuously variable transmission (CVT) is now standard in all Altima sedan trims.

Other changes notable in the 2010 Altima include a revamped, iPod-capable audio system and an upgraded DVD navigation system featuring Bluetooth, streaming audio, a 6.5-inch touch-screen, and USB-enabled digital music storage. These enhancements represent a much-needed re-infusion of technological savvy that complement the Altima's last major facelift in 2007. Though featuring 15.3 cubic feet of trunk space and roomy front seats, the Altima’s back seat remains an uncomfortably cramped area for anyone over 6 feet tall. 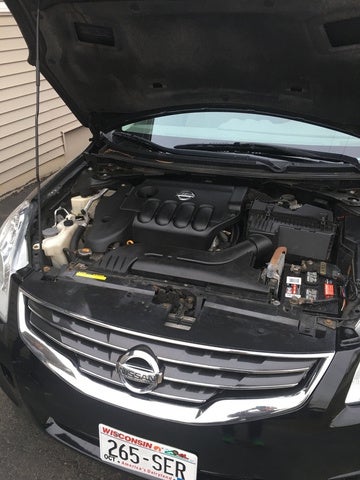 Nissan’s Altima Hybrid sports a 2.5-liter hybrid I4 that combines with the standard CVT to produce 158 hp and 162 lb-ft of torque. A single 40-hp electric motor can power the Hybrid by itself for short distances at lower speeds, and its nickel-metal hydride battery is recharged by both the gasoline engine and by a regenerative braking system. Like nearly all hybrids on the market, the Hybrid’s gasoline engine automatically shuts down at a stop, then restarts on acceleration. Fuel efficiency for the Hybrid is claimed to be 35/33.

Though not exactly a screamer, the 2.5-liter I4 with its accompanying CVT accelerates deftly and, according to reviewers, handles passing and merging with little difficulty, though many lament the lack of a good manual transmission. The 3.5-liter V6, on the other hand, accelerates from zero to 60 in an accommodating 7 seconds, with reviewers again noting adequate if not eye-popping performance from the well-matched CVT. Reviewers are a bit sanguine about the Altima Hybrid’s performance, noting that it seems a bit restrained in merging and passing situations and blaming this laziness on its standard CVT. A few reviewers mention a less-than-refined engine note with both the conventional and the hybrid I4 engines, especially under heavy acceleration, but the Hybrid does jump from a stop to 60 mph in a class-leading 7.6 seconds.

Equipped across the lineup with a four-wheel independent suspension, MacPherson front struts, front and rear stabilizer bars, and a multi-link rear end, the 2010 Altima 2.5 trims ride on 16-inch wheels and, according to virtually all professional reviewers, provide a stately and comfortable, if not overly exciting, ride with little sway or bounce, even on less-than-ideal pavement. With its standard sport-tuned suspension featuring beefier shocks and stabilizer bars, and rolling on 17-inch alloy wheels, the 3.5 SR rides noticeably stiffer than its lower-end siblings, with significant degradation of ride comfort over rough surfaces. However, the upside claimed by most reviewers for the beefier suspension system is a notable improvement in nimbleness, as well as a bit more intimacy with the road.

The Altima’s steering and braking characteristics are noted by the majority of reviewers as above average, though steering can feel a tad light at times. Some reviewers find a noticeable touchiness in the Altima’s brake pedal, but otherwise find the brakes to be responsive and forceful, providing good straight-line stopping power.

Nearly all reviewers particularly laud the all-around handling capabilities of the 2010 Altima 3.5 SR. When pushed to its limits, this top-end trim doesn’t just schlep around like the typical staid family sedan. However, even the 2.5 trims are notable as being just a bit sportier than the norm.

The 2010 model year finds the Nissan Altima a touch more technologically relevant and a tad plusher than previously. The base 2010 Altima 2.5 features velour upholstery, power windows, door locks, and mirrors, cruise with wheel-mounted controls, air conditioning, and a tilt/telescoping steering wheel as standard equipment. Oddly, only the wiring for a four-speaker audio system, but not the speakers, radio, or CD player, is delivered with the base trim. The 2.5 S adds the Intelligent Key remote entry system and a single-CD player with six speakers. Adding the available SL Package to the 2.5 S results in the 2.5 SL trim, featuring 16-inch alloy wheels, leather seating, power driver’s lumbar support, heated front seats, and a leather-wrapped shift knob. The Altima 3.5 SR for 2010 boasts such standard features as the sport-tuned suspension, an eight-way power-adjustable driver’s seat, heated mirrors with integrated turn signals, and a leather-wrapped steering wheel. Finally, the Altima Hybrid features such added standard amenities as dual-zone climate control and 16-inch aluminum alloy wheels.

Options and option packages are one of the Altima’s few bugaboos, with more than a few reviewers wondering why so few stand-alone options for the higher trim levels and why so many convolutions in package configurations. In any case, for the 2.5 trim, stand-alone options include aluminum kick plates, front and rear floor mats, and a rear-seat DVD entertainment system. Option packages available for the 2.5 S include the 2.5 SL package, effectively elevating it to another trim level, as well as the Technology Package, with DVD navigation, Bluetooth streaming audio, and rear-seat DVD entertainment; the Premium Audio Package, with a nine-speaker Bose audio system, rearview camera, and Bluetooth hands-free communications technology; and the Convenience and Convenience Plus Packages, featuring a power moonroof, dual-zone automatic climate control, eight-way power-adjustable driver’s seat, and the Intelligent Key system. One stand-alone option available with the 2.5 S and SL is a rear spoiler. The 3.5 SR adds the optional Premium and Sport Packages, which are revamped versions of optional equipment available with the 2.5 trims, with the addition of a universal remote garage door opener included in the Premium Package. The Premium and Technology Packages are available with the Altima Hybrid, as is the stand-alone rear-seat DVD entertainment system.

Virtually all professional reviewers find the 2010 Altima’s cabin ambiance to be comfortable if a bit restrained, with the black interior considered almost stodgy. Gauges are large and easy to read, with controls well-marked and logically placed. Most reviewers do find, however, that the available DVD navigation system eats up too much audio functionality and is occasionally somewhat difficult to decipher. Rear head- and legroom are at a premium, and seats are often described by professional reviewers as barely adequate and not especially comfortable on long trips. Visibility, however, is noted as excellent, and cabin materials and workmanship are described by most reviewers as above average.

A plethora of standard safety features protects the driver and passengers in the 2010 Nissan Altima, including four-wheel disc ABS with electronic brakeforce distribution, traction and stability control using Nissan’s much-ballyhooed Vehicle Dynamic Control, dual front side-mounted airbags, front and rear head airbags, front active headrests, and a remote anti-theft alarm. The 3.5 SR additionally features standard integrated signals in the outside mirrors, which are optional on the 2.5 S, 2.5 SL, and Hybrid trims, while auto on/off headlights are also standard on the higher trims. Front fog/driving lights are offered as an option on all trims except the 2.5.

A number of owner complaints on the 2010 Altima involve less-than-ideal exterior trim materials, confining rear-seat leg- and headroom, and its confusing and intrusive trunk struts. Additionally, many owners simply can’t fathom why Nissan offers so few stand-alone options for the Altima, noting that the options packages are not only confusing and confining, but also expensive. Some minor steering issues as well as a lack of punch from the I4 engine also cause a gripe or two from owners, but it’s conceded that these are more expectation issues than serious performance problems. A few owners also complain that the Altima Hybrid has a tendency to idle poorly when first started, though it evens out just fine after a minute or two.

On the positive side, owners are pleased with the 2010 Altima’s level of cabin sophistication, its alert handling characteristics, and its over-the-top safety features. The 3.5 SR especially pleases owners with its nimbleness and its smart acceleration with the CVT-managed V6. Sporty styling, fuel efficiency, and family-friendly value also impress most owners, as do such technological features as the available power sunroof, Intelligent Key system, rear-seat DVD entertainment, and rear-view camera.

Users ranked 2010 Nissan Altima against other cars which they drove/owned. Each ranking was based on 9 categories. Here is the summary of top rankings.

Have you driven a 2010 Nissan Altima?
Rank This Car

Altima will not accelerate. Idles only in park n reverse press gas pedal no response

Guru9LRTZX asked a 2010 Nissan Altima 2.5 S General question about a month ago

2010 Nissan Altima vehicle information display shows a "head and shoulders" silhouette which I am not able to find in the owner's manual. Never before displayed this maintenance silhouette in the te...

Does Anyone Knows About Nissan Altima ?

What Else I Should Do About My Car Not Starting?

I've changed the starter, ignition coils, and had the alternator rebuilt and the car still won't start. What else can I do?

Let It Be Real asked a 2010 Nissan Altima 2.5 SL General question 6 months ago

The Lights On The Dashboard