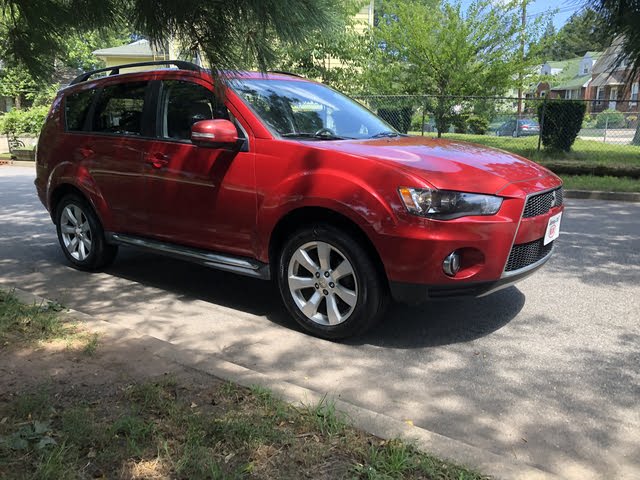 Once considered an inelegant poseur, the 2010 Mitsubishi Outlander crossover has undergone a fairly comprehensive facelift and now looks the part it was designed to play. An imposing new grille, LED tail lights, additional chrome styling accents, redesigned wheels, and a bit of stretching has provided more passenger and cargo room, as well as some much needed pizzazz for this four-door, five- to seven-passenger crossover. Available in four trim levels, the base ES, SE, XLS, and just-introduced GT, the Outlander offers 8.5-inches of ground clearance and 73 cubic feet of cargo area with the rear seats folded, and the three lower trims are available with full-time all-wheel drive (AWD). The GT trim, meanwhile, is offered only in the AWD configuration. Major competition for the Outlander is and probably always will be Toyota’s well-regarded RAV4, however, the 2010 Outlander is marginally less expensive and has an almost unheard of 100,000-mile powertrain warranty.

Two engines as well as a pair of transmissions are available to power the 2010 Outlander. The base drivetrain for the ES and SE trims is a variable-valve-timed (VVT) 2.4-liter inline four-cylinder (I4) that, along with the standard continuously variable transmission (CVT), throws down 168 hp and 167 lb-ft of torque. The I4 is touted to get some 21/27 mpg in front-wheel-drive (FWD) trims and 21/25 in AWD versions. Towing capacity is claimed to be 1,500 pounds when the available trailer towing package is selected. The upper-echelon XLS and the brand-new GT Outlander are each equipped with a standard 3.0-liter SOHC VVT V6 engine and a well-regarded six-speed auto-manual transmission. This combo delivers 230 hp and 204 lb-ft of torque, and gets an EPA-estimated 19/25 in the FWD configuration and 18/24 in AWD trims. Towing with the V6 is viable up to some 3,500 pounds in the AWD XLS and GT trim levels. Mitsubishi boasts about its All Wheel Control, which allows a bit of flexibility in locking the rear hubs in its AWD trims, with the GT offering Super All Wheel Control (S-AWC), with drivers able to configure the AWD system to changing weather and road conditions with the turn of a dial.

The 2010 Outlander XLS features standard seven-passenger seating with a folding third-row bench seat, 18-inch, seven-spoke alloy wheels, installed Bluetooth communications technology, including a hands-free phone, keyless entry and ignition, and a 6-CD changer. The GT trim, meanwhile, adds a power sunroof, automatic climate control, and a 710-watt, nine-speaker Rockford-Fosgate premium audio system with three months of free satellite radio. Options for the entire Outlander lineup include a trailer hitch and wiring, DVD navigation, roof rails, remote start, and a rear-seat DVD entertainment system. The lower trims, of course, add the power sunroof, Bluetooth technology, and upgraded audio systems that are standard with the XLS and GT trims. Third-row seating, however, while optional for the SE, is unavailable for the ES trim level.

Safety-wise, the 2010 Outlander comes equipped with standard four-wheel ABS, traction and stability control, dual front side-mounted airbags, front and rear head airbags, active front headrests, a remote anti-theft alarm, and daytime running lights. Turn-signal-integrated mirrors and front fog/driving lights are optional for the ES trim and standard on all others, while Xenon HID self-leveling headlights are standard only with the GT trim.

Issues that owners have with the 2009 Mitsubishi Outlander include its small fuel capacity, some inferior cabin materials, seat comfort, including the unavailability of heated seats, and the lack of an optional third-row seat with the ES trim. Warranty coverage, V6 power, a higher stance, the highly touted six-speed auto-manual transmission, tight turning radius, and decent mileage figures, however, lead the vast majority of owners to laud the ’09 Outlander, with some even regretting their haste in not waiting for the improved 2010 edition.

What's your take on the 2010 Mitsubishi Outlander?

Guru5F94H Purchased ES New February, 2011 2.4 liter. 7 years later and 77,000 miles (123,000 kms) still have original brakes, now worn 50%. I do not do the 'Oh, a red light, maybe I should slam on the brakes' routine. Driving 50/50 highway city. Brakes are checked every 3000 miles during oil change. Have not had any trouble other than the gas cap interior lever malfunctioned. It was still under warranty and repaired by dealer. That said, I would not buy another ????????? The suspension sucks, road and outside noise is a major issue. Tires have been replaced with top of the line quiet riding Bridge Stones. Mitsubishi warranty is fantastic 5/5/10 year. Still have 23,000 miles/ 3 years remaining on power train. Gas mileage is nothing to get excited about even with the 2.4 liter. I purchased this vehicle because of the warranty and honestly ---- the color.

Have you driven a 2010 Mitsubishi Outlander?
Rank This Car

844 views with 4 answers (last answer about a year ago)

Hey I got a 2010 Mitsubishi Outlander v6 4WD with normal automatic transmission. Was wondering which turbo size is good and fits and also the limitations on horsepower?

Adding A Turbo Or Supercharger To A 2010 Mitsu Outlander?

I have a 2010 Mistusbishi Outlander SE AWD with the 2.4 L 4 cylinder and would like to add a bit more HP (makes 168 HP now). It has the CVT Auto Transmission. What's the feasibility of adding a tu...

What Would Cause The Dash Lamps As Well As The Headlamps To Flash Off And O...

While driving last night all of the indicators lit up and my headlamps started flashing and then went out. I heard a clicking sound as if something was trying to reset itself. Even after I shut down t...

The engine light came on a while back and was diogonised as oxygen sensor being faulty, had it changed and the light went off , a few miles later after fueling it came back on and it has been on sin...