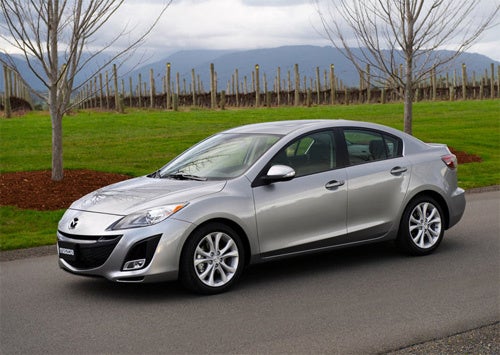 With sports-car handling and a near-luxury ride, the 2010 Mazda MAZDA3 offers owners an experience not otherwise available in the class. 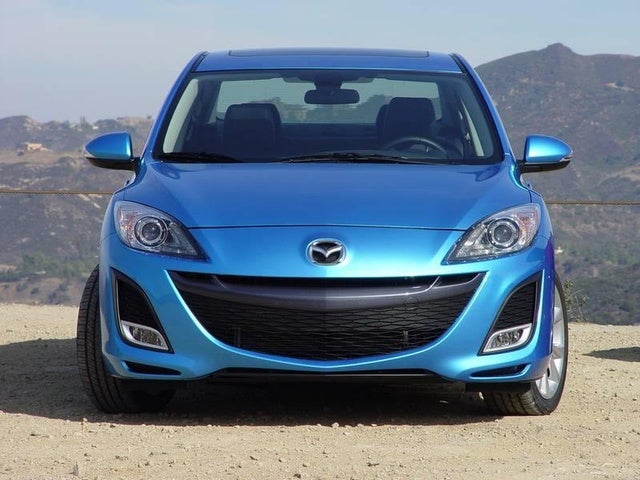 The 2010 MAZDA3 is very simply one of the best deals available today, and a damned fun car to drive besides. Mazda has gone out of its way to not only offer an experience that far surpasses its competition, but to continually improve on it. Go for the 2.5-liter engine, choose your options from there, and you won’t be disappointed.

A new look, more power, and subtle enhancements grace Mazda’s popular MAZDA3 this year, including a new engine and many new standard options. Available as a sedan or a hatchback, these four-door, front-wheel-drive vehicles represent one out of every three Mazdas sold worldwide. The MAZDA3 sits atop a modified version of the Ford Focus C1 platform, which expands overall length 3.5 inches over previous model years to 180.9 inches. A new vacuum booster is the star of a revised braking system, designed to deliver more-confident pedal feel in both light and heavy braking conditions.

The car has been redesigned inside and out, in what Mazda calls a new styling direction indicative of the future of the entire model line. Truly, many elements from other Mazda vehicles seem to have been incorporated into the new MAZDA3, with its slightly anthropomorphized smiling grille, rearward leading bumpers and revised rear end incorporating larger markers all around. Inside, Mazda has made an attempt to up value and luxury in a bid to woo buyers away from larger cars that often offer more options than their smaller competitors. As a result, driver’s seat memory, steering-linked Xenon headlamps, and dual-zone automatic climate control, options rarely seen in this class, are now available on the 2010 MAZDA3. 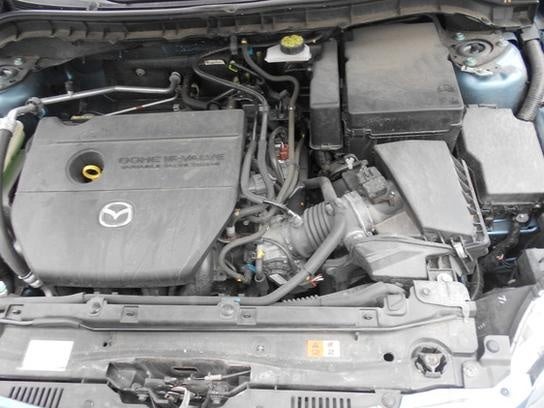 Two engines are available, designated by the “i” or “s” classification, the latter of which has both power and displacement upgrades. The base engine is a 2.0-liter inline four-cylinder (I4) that produces 148 hp and comes in the SV, Sport, and Touring trims. This is a carryover engine, however the “s” trims - Sport and Grand Touring - receive or have the option of a larger and more powerful motor, a 167-hp, 2.5-liter I4, an engine shared with the MAZDA6. The 2.0 engines come standard with a five-speed manual transmission, while the 2.5s enjoy an additional gear. Both engines have the option of a five-speed automatic.

The 2.0 seems to have adequate power from a stop, but struggles a bit on the highway in passing or climbing situations, with little difference felt between manual and automatic transmissions. The 2.5 suffers no such shortcomings, with the manual transmission offering an even quicker feel than the automatic. That said, many have complained about the throw length with the manual, leading to a short-throw shifter being a common aftermarket upgrade.

This may be the best characteristic of the MAZDA3, with a ride and handling that has been called among the best in its class. Some reviewers have even gone so far as to say that the MAZDA3 exhibits “near-premium levels of comfort and composure,” with little difference being seen between the “i” and “s” trims. The same can be said of the steering and lean resistance, with impressive control in both regards among all trims. This is all helped in part by a rubber-isolated subframe which supports the powertrain, rack-and-pinion steering system, and the lower attachments of the front suspension.

Hard plastic surfaces are isolated out of sight toward the bottom, and still manage to avoid feeling or looking cheap, and the rest of the surfaces and materials in the cabin are fitted well and seem of high quality. Controls are well-placed with the exception of the navigational display, which is placed high on the dashboard, but still too small for convenient glances. Noise is well contained, although the 2.0 can sound harsh under strain, and tire and wind noise is amplified a bit in the hatchback over the sedan. 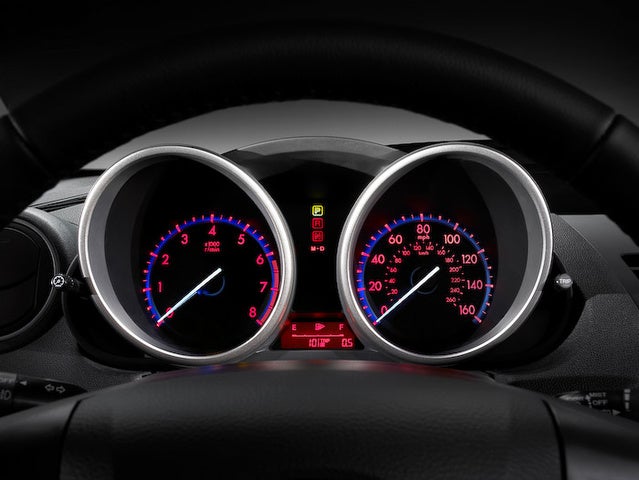 Since making six airbags standard, the MAZDA3 has achieved a five-star rating in NHTSA tests, excepting side impacts involving the rear passengers and in rollover resistance, both of which earned four stars. Additional safety features include four-wheel antilock disc brakes with brake assist and a tire pressure monitor for all trims, while iTouring and above additionally receive an antiskid system.

Owners have been very pleased with the MAZDA3 overall, with the model getting increasingly better since its inception. With a ride and handling that far surpass its competitors, the smile on the front grille seems to have done its infectious job. Small complaints are heard regarding the 2.0-liter engine and the length of throw in the manual transmissions, but these seem to stand in contrast to the finer points of the vehicle.

Users ranked 2010 Mazda MAZDA3 against other cars which they drove/owned. Each ranking was based on 9 categories. Here is the summary of top rankings.

Have you driven a 2010 Mazda MAZDA3?
Rank This Car

My AT light recently flashed on and with it a jerky feeling. I took it in to have it looked at, came back saying a software updated was needed. Less than a week later the same thing happened again....

Ive been having trouble with my MAZDA3 2010 for over a year now. The breaks went soft and I feel no pressure when breaking. It’ll eventually break but it doesn’t feel normal at all. I’ve taken in t...

Is There A Way To DIY A Ruined Logo On A Steering Wheel?

How do I go about fixing or covering the logo with a chrome or silver like paint pen? Or do I have to get it replaced?

How Do I Fix This Scratch On My Bumper And How Much Will It Cost? DIY??