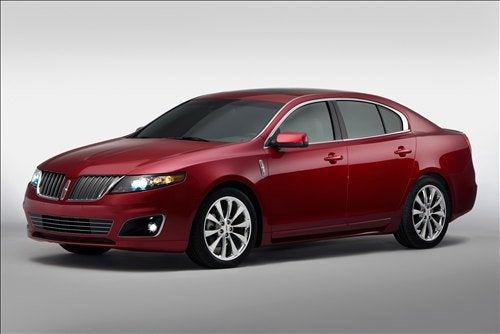 Appearance-wise, the 2010 Lincoln MKS five-passenger luxury sedan is relatively unchanged from ’09. Performance-wise, however, there’s a world of difference. The much-ballyhooed twin-turbo, direct-injected, 3.5-liter EcoBoost V6 engine will be available for the 2010 MKS AWD trim, at least to start with, giving it more power and better fuel economy than the V8-powered Mustang GT. The base engine for the 2010 MKS remains a 270-hp 3.7-liter V6 that gets 16/23 mpg. Both engines will be managed by the six-speed auto-manual transmission from the 2009 MKS. Steering-wheel-mounted paddle shifters are expected to help provide a sportier drive in the 2010 MKS.

Another much-heralded feature available on the 2010 Lincoln MKS will be Active Park Assist. This marvel will, in theory, use sensors to not only find a parking space, but to semi-automatically parallel park the MKS without so much as the most minute ding or scratch.

The 2010 Lincoln MKS's ride and handling are average - quiet, reasonably smooth, with little body lean in corners. It doesn’t, however, quite measure up to the market average for an entry-level luxury sedan.

Standard safety features in the 2010 Lincoln MKS are expected to include four-wheel disc ABS, traction and stability control, an anti-skid system, front side-mounted airbags, and front and rear side curtain airbags.

Appearance, comfort, and convenience features for the 2010 MKS include 18-inch alloy wheels, leather upholstery and trim, rear backup sensors, and the usual power accessories, along with the once-optional SYNC hands-free communication and audio system. Options for the 2010 MKS are expected to include - besides the 3.5-liter twin-turbo V6 and Active Park Assist - DVD voice-activated navigation, and 19- and 20-inch chrome-clad wheels.

Have you driven a 2010 Lincoln MKS?
Rank This Car

My Windows Wont Go Up Or Down

Kaiden asked a 2010 Lincoln MKS 3.7L Maintenance & Repair question about a year ago

Car Not Getting Power

Not Able To Respond To Messages I Get On The Site?

I have gotten 2 responses so far from my ad, but I can't respond to them on the site?

Will Pushing The Start Button And Depessing The Brake Pedal At The Same Tim...

I have had several instance when the car would not start and I would then also notice that the brake pedal would feel tight. After waiting about an hour I would try to start the car again. The brake p...