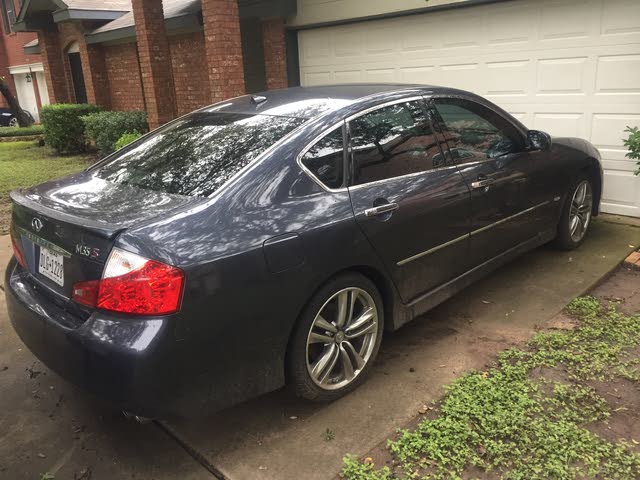 Infiniti’s competition for the Mercedes E-Class and the BMW 5 Series, the M35 shares its platform with the Nissan 350Z, providing hot heritage to supplant its luxury leanings. This four-door midsize luxury sedan is available in rear-wheel-drive (RWD) and all-wheel-drive (AWD) configurations, the latter being designated the M35 X. The M35 received a mild facelift last year and is scheduled for a full redesign for 2011, accounting for an uneventful 2010.

With its 303-hp, 3.5-liter V6 engine and seven-speed shiftable automatic transmission, 0-60 times floating around 6 seconds are possible with either drive configuration, despite the added weight of the AWD system, due to that trim getting a faster but less efficient five-speed automatic. In fact, EPA estimates put the RWD M35 at 16/21 mpg while the AWD M35 X manages 14/20, both with premium gasoline. While the engine is strong and fast, and the transmissions smooth, some harshness is noted at higher engine speeds, when the pleasant growl starts to sound excessively strained.

With leather upholstery, heated and cooled front bucket seats with 10-way power, and dual-zone automatic climate controls, the M35 provides all the amenities you’d expect from a luxury entry. You’ll also get a memory system for the driver’s seat, heated power mirrors and power steering wheel, a 6-CD, MP3- and satellite-ready stereo with Bluetooth, and power throughout, including a sunroof and keyless access and start. A Sport Package adds unique trim inside and out, a sport-tuned suspension, 19-inch wheels, and Rear Active Steer, which will counter-steer the rear wheels when needed. The Sport Package does require the Technology package, however, which adds a rearview camera and a navigation system and upgrades the stereo to a Bose unit.

Unfortunately, the M35 has never received the kind of praise its performance earns. Perhaps due to its conservative appearance, the M35 has been remained a sleeper among enthusiasts, despite its impressive performance and quality presentation. While it fails to match the handling of its best competitors, it doesn’t fall far behind, and remains a solid entry in the midsize luxury class, at what can be considered a bargain of a price. 2010 M35s shouldn’t disappoint, but those interested may want to hold off for a year to see what 2011 will bring.

LargeLarry High build quality and very smooth. I don't think they are as dated looking as other 2010s.

Users ranked 2010 INFINITI M35 against other cars which they drove/owned. Each ranking was based on 9 categories. Here is the summary of top rankings.

Do you have to have the radiator flushed after having the thermostat replaced?

I cannot find my listing

Is it normal that the radiator be flushed after replacing the thermostat?