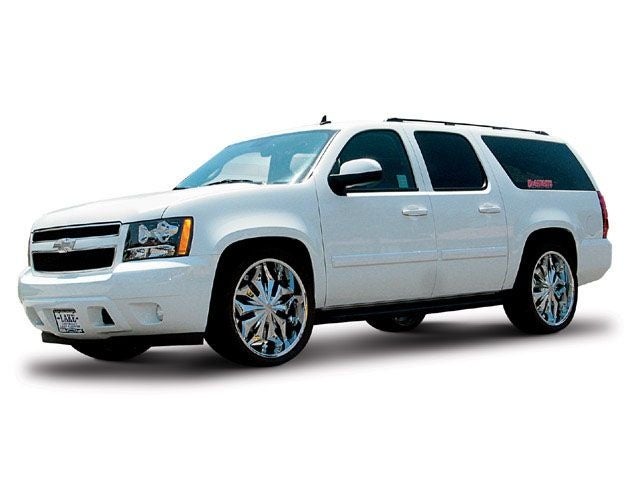 The 2010 Chevrolet Suburban combines decent towing capability, V8 oomph, styling pizzazz, an abundance of standard and available goodies, cavernous cargo space, a better-than-average ride, and one of the roomiest cabins in its class, resulting in a versatile and capable full-size SUV.

For those needing the stature, towing ability, nine-passenger seating, cargo room, and off-road capability of a full-size SUV, the 2010 Chevy Suburban more-than-adequately fills the bill. Trouble is, how many drivers out there, besides celebrities and politicians, really need or desire all that?

Big, brawny, and, at least to most eyes, beautiful, the 2010 Chevrolet Suburban full-size SUV claims one of the roomiest cabins and the most capacious cargo area in its class. This five-door behemoth can carry up to nine passengers on its truck-based chassis, and, after a hefty redesign in ’07, features smoother styling, more efficient drivetrains, and upgraded standard amenities and options. Questions remain, however, about just how many drivers out there have to have – or are willing to pay for – an oversize leviathan that is not exactly easy on gas and, despite standing tall and having a tolerably tight turning radius, can present a significant challenge to maneuver and park in the big city.

For 2010, the Chevy Suburban is available in three trim levels, the base LS, midlevel LT, and top-shelf LTZ. Both the LS and LT are available in either the half-ton 1500 edition, or the three-quarter-ton 2500, while the LTZ is available only in the 1500 edition. All trim levels are also offered with either rear-wheel drive (RWD) or part-time four-wheel-drive (4WD) configurations. The 2LT trim has been dropped for 2010, with its features distributed between the LT and LTZ trim levels.

The Suburban’s 137 cubic feet of cargo capacity is tops in its class, but rumblings have been heard about inferior cabin trim materials and inadequate interior storage spaces. At least one review also questions the Suburban’s reliability, based on past history. Features-wise, however, the 2010 Suburban is tough to beat, with even the base LS offering more-than-adequate creature comforts and appearance amenities. Add on a plethora of options, stand-alone as well as packages, and it's plain that Chevy intends to woo fans of such competitors as the Ford Expedition and Toyota Sequoia. 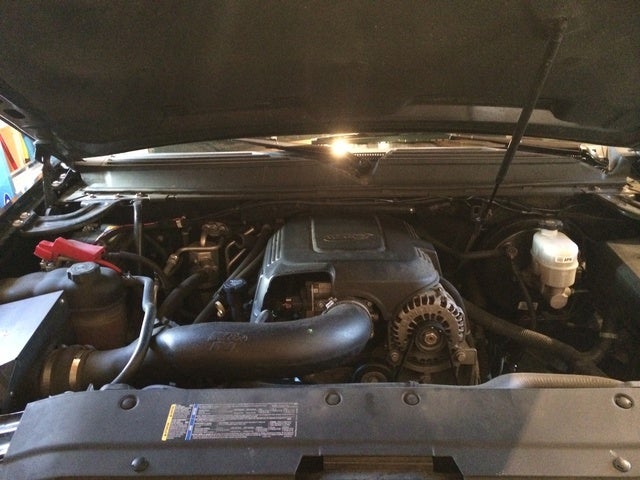 Two V8 engines are available for the 2010 Chevy Suburban, depending on which edition, 1500 or 2500, is selected. Two six-speed automatic transmissions are also offered, one a straight automatic, the other featuring a shiftable auto-manual configuration. Both engines additionally feature the economical deactivation of four cylinders at cruising speed, but, considering the Suburban’s weight, some 5,600 to 6,300 pounds, depending on trim, mileage figures remain tepid, at best. One reviewer mentions a 0-60 time of approximately 9 seconds for the 5.3-liter V8, about average in its class.

Most GM products are noted for their generally civilized ride, and the 2010 Chevrolet Suburban is no exception. Regarded by many professional reviewers as having one of the most comfortable rides of any full-size SUV on the market, the Suburban’s truck-based underpinnings soften most minor bumps, and rarely allow any sway or wallow over uneven pavement. Rear leaf springs on the 2500 series make this trim the obvious choice for towing heavier loads.

Both the LS and LT trims ride on 17-inch alloy wheels, while the LTZ comes with standard 20-inch wheels. The Suburban’s 2500 trims also are equipped with standard all-terrain tires, in case some back-country travelling is in order. All trims have an independent, short-and-long-arm front suspension and solid live rear axle, with front and rear stabilizer bars. Steering is hydraulic rack-and-pinion and, of course, the Suburban is equipped with four-wheel disc brakes.

While its high stance and hefty weight keep the 2010 Suburban from behaving like a sports car, a relatively tight (43-foot) turning radius helps maneuverability in smallish parking lots and in city traffic. A few reviewers, however, note some touchiness in the steering feel at highway speeds, which may take a bit of getting used to. This tendency, it appears, is more noticeable with the LTZ’s 20-inch tires. Otherwise, this big SUV proves itself adept in its response to steering and braking commands, though brake pedal adjustment could, according to a number of reviewers, use some improvement. 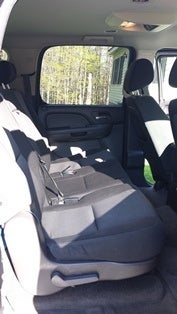 Reviewers are, for the most part, impressed with the number and variety of standard amenities offered with the 2010 Chevy Suburban. The base LS 1500 trim, for example, offers a trailer hitch, roof rack, and step running boards as part of its standard appearance package, with such cabin comfort and convenience features as tilt-wheel steering, nine-passenger, three-row seating, premium cloth upholstery, a six-way power driver’s seat, power windows, door locks, and mirrors, cruise control, steering-wheel-mounted cruise and audio controls, dual-zone air conditioning, a leather-wrapped steering wheel, single-CD player with six speakers and satellite radio reception, USB connection, and OnStar telecommunications with hands-free phone also included in its base price.

The Suburban’s cabin is described by most reviewers as extraordinarily roomy, with more than sufficient leg and headroom in the first and second rows. The cabin is also touted by virtually all professional reviewers as reasonably quiet and liberally endowed with storage cubbies, consoles, and pockets. Reviewers do note, however, a lack of soft interior surfaces, as well as indistinct gauges and the placement of some controls at an uncomfortable distance for drivers with short arms. 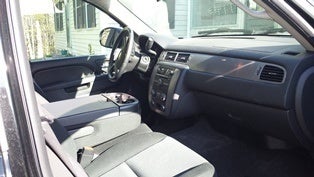 The National Highway Traffic Safety Administration gives the 2010 Suburban five stars in front crash testing and three stars for rollover safety. Side impact testing was not available. The Insurance Institute for Highway Safety has no test results for the Suburban, which is not surprising given this big SUV’s size and weight advantage over just about everything else out there.

Owner reviews of the 2010 Chevrolet Suburban are few and far between, thus the bulk of sources are found in consumer reviews of the nearly identical ’09 version. Most complaints about Chevy’s full-size SUV involve tepid mileage numbers, somewhat lackadaisical acceleration, less-than-top-quality interior materials and workmanship, and a disturbing tendency in both the six-speed automatic and the six-speed auto-manual transmissions to buck and shudder. A further complaint is that the second row of seats does not fold flat to the floor, thus making things difficult when loading cargo.

On the plus side, owners of the ’09 Suburban are well-pleased with its looks, ride comfort, and handling. Despite its lackluster acceleration and dubious shifting abilities, owners praise the two V8s as well up to their towing tasks and capable of providing sufficient power to easily merge and pass on the highway. According to virtually all owners of the ’09 Suburban, by far its most appealing feature is the sheer size of its cabin.

What's your take on the 2010 Chevrolet Suburban?

salchan My sister was driving a 2010 Chevy Suburban the vehicle accelerated at a high rate of speed, the steering and brake mechanism locked. Why Is this? It took her life, she left behind husband, daughter, son and many family members that miss her deeply. What really happened to the vehicle, no one wants to admit anything went wrong, strange she picked the suburban up from dealership about 25 minutes before her death. All comments would be greatly appreciated, the family deserves answers, especially the husband, and small children. When will someone admit they made a mistake and these accidents stop???

Peg I bought my Land Whale 3 years ago. It had 86K+ miles and now just under 92K. Gas mileage is abysmal but I didn't buy it of fuel economy. This is my dog show vehicle and I have 2 extra large custom wire crates in place of the 3rd row seat. This leaves ample storage for luggage, my show box and if needed, to leave the smaller seat open. This truck is extremely comfortable smoothing out rough pavement and bumps. I do not recommend driving speeds over 70-75 mpg because I feel the truck does not have enough road feel for me. The few options that would make me LUUUV my Whale even more are heated leather seats, Bluetooth, and a sunroof but I'm very pleased without those options. Caveat: if you are not accustomed to driving a HUGE vehicle, please do not. You will be a menace on the road and get yourself injured and others killed.

Users ranked 2010 Chevrolet Suburban against other cars which they drove/owned. Each ranking was based on 9 categories. Here is the summary of top rankings.

Have you driven a 2010 Chevrolet Suburban?
Rank This Car

Looking to change out my 2nd row bench for buckets in my 2010 LT is it possible? Also, i have tan leather if anyone is interested in trading out.

What Can Be The Causes Of My Check Engine Light Coming On?

because i bought a mechman alternator for my chevy trailblazer but i took it out .so i want to buy a 2010 chevy suburban so can i used it

Why Was Your Price Cheaper Than The Dealer?

Wewent to kunes motors in delevan wisconsin to look at a 2010 chevy suburban you listed for 11,834 when we got there the price was 14,995.Why did you list that price.We drove 45 miles to get this tr...