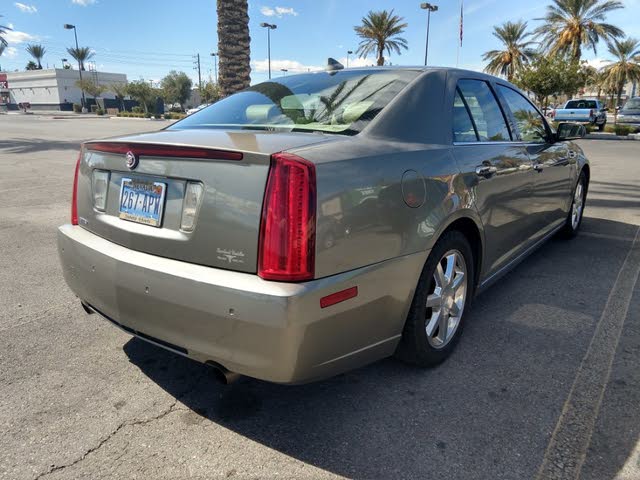 The 2010 Cadillac STS provides some high-end performance to balance its trademark Caddy luxury. Test drivers enjoy the car’s handling and ride, whether on curvy back roads, in traffic, or on the highway. The downside is found in the STS's interior, where some average quality materials and construction don’t match up to the standards of the luxury sedan class.

The STS was redesigned in 2008 and remains unchanged for 2010 - and as far as its appearance goes, that’s a good thing. With the recognizable Cadillac crest riding front and center on the prominent chrome grille and trendy chrome fender vents, the STS offers a bold look that is recognizable as Cadillac, but is also forward-looking. The STS is offered in 10 different trims, with all-wheel drive and a V8 representing some of the significant differences.

If you just can’t decide between a larger, classic American luxury car and a sportier luxury sedan, then the STS may be your perfect fit. But if you want pure performance or pure luxury, you might want to look elsewhere.

The overwhelming consensus is that the V6 offers ample power and that the extra 18 horses provided by the V8 are probably not worth the extra $9,000. An STS with a V6 has plenty of starting power, and Cadillac says it can get from 0-60 in 6.5 seconds, a number that felt correct to test drivers. Unlike many luxury sedans, the STS does not require premium fuel.

Those powertrains paired with well-tuned suspensions provide the STS with a ride that is both sporty and plush and the vehicle’s true highlight. Its handling belies the car’s size and weight, as the STS takes corners with poise and maneuvers with an athletic feel. But if you don’t feel like testing your car’s limits, the STS can also be a comfy commuter/lazy-Sunday-drive Cadillac. The available AWD is a huge benefit for owners who have to live with snow.

The optional Magnetic Ride Control suspension allows the driver to shift between Touring (cushy) and Sport (sharp control) modes. Testers weren’t crazy about the STS's steering, feeling it was too vague at times. The brakes were a different story, offering short, straight, and reliable stops.

If the handling is the good, the interior is the bad for the STS. Don’t be mistaken, the cabin is hardly lifted from the base trim of an economy car. The base V6 STS's features include an eight-speaker Bose sound system, Bluetooth, dual-zone climate control, eight-way power seats, programmable locks, a driver information center, an auto-dimming mirror with compass, audio controls on the leather-trimmed steering wheel, a theft-deterrent system, OnStar, and XM Radio. Upgrades include a navigation system, memory for the seats, and heated and ventilated seating.

But the STS has too many minor flaws for a car in this price range and class – low-grade plastics and metals, confusing control markings and memory-setting procedures, inconsistent build quality, limited space in the rear seats, and a tiny trunk (13.8 cubic feet). Even among users who recommend the STS (and most do), there were complaints about the interior. The good news here is that many of these criticisms are subjective. Who knows - you might sit in the STS and find the cabin appealing and efficient.

The STS shines when it comes to safety. All trims offer antilock brakes, traction control, an anti-skid system, front side airbags, and curtain side airbags. Lane-departure and blind-spot alert systems are also available. The STS received four of five stars from the NHTSA in frontal driver, frontal passenger, and side driver crash test results and five stars for its side rear passenger results.

Guru58S9Y I have owned my 2010 sts for 5 years now and absolutely love it. Not only looks great but drives great as well, also some people knock the interior but I see no problems at all. Love the wood accents especially on the steering wheel. Believe me you can’t go wrong.

Have you driven a 2010 Cadillac STS?
Rank This Car

My 2010 Cadillac STS Won't Crank Over

Accesories Active Comes On When Starting

yes I thank you sir for reading my e-mail I am looking for a big block motor a 427 I hope with tran to put in my 1994 chevy pick up I will also need the compture with it right? can you help me or tell...