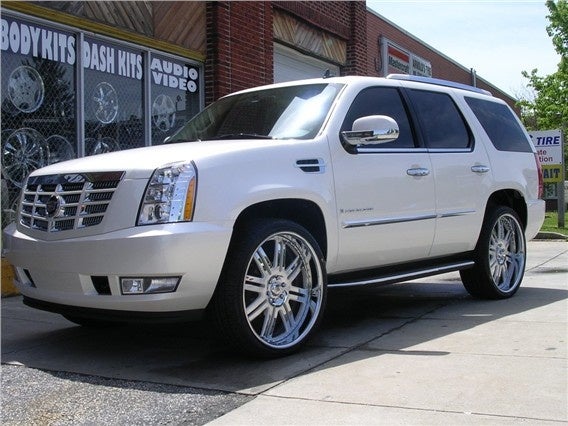 Since its debut in the 1999 model year, the Cadillac Escalade has been a perennial favorite in the upscale, full-size SUV market. For 2010, the Escalade has all the luxury bells and whistles that drivers have come to expect from the iconic Cadillac brand, and, since the ’09 model year, is even available in a Hybrid trim. Thus the 2010 Escalade is offered in six trim levels, starting with the Base, and moving up to the Luxury, Premium, Platinum, and a pair of Hybrid trims, Base and Platinum. Each trim is delivered with standard three-row seating for seven, five doors including a power liftgate, and either rear-wheel drive (RWD), full-time all-wheel drive (AWD), or, in the case of the Hybrid trims, on-demand four-wheel drive (4WD). Of course, luxury features, passenger room, and performance abound, as does cargo area, at 109 cubic feet with the second-row seats folded and third row removed, and trailer-hauling capacity, at over 8,000 pounds. All this, naturally enough, presupposes the wherewithal to shell out nearly $62,500 for the Base trim, and over $87,500 for the 4WD Hybrid Platinum.

All gasoline-powered 2010 Escalade trims carry a 6.2-liter OHV variable-valve-timed Flex Fuel (FFV) V8 engine that’s equipped with cylinder deactivation for economical highway cruising. Under the management of the six-speed auto-manual transmission, the Escalade will pound out 403 hp and 417 lb-ft of torque, good enough for the RWD trims to haul some 8,300 pounds of trailer, with the AWD able to tow 8,100 pounds, max. Mileage is estimated at 14/20 mpg for the RWD trims and 13/20 for the AWD versions.

The 2010 Escalade Hybrid features a 6.0-liter Hybrid FFV V8, also an ethanol-fuel-capable engine that combines with a pair of 60-kilowatt electric motors to put out 332 hp and 367 lb-ft of torque. A continuously variable transmission (CVT) is the brains behind this hybrid system, allowing the RWD Hybrid to achieve 21/22 while also giving the 6.0-liter V8 the capability to tow 5,800 pounds of trailer. The Escalade Hybrid is additionally capable of accelerating to 25 mph on electric power alone, while regenerative braking assists in recharging its nickel-metal hydride battery. Despite electronic hi-lo gear selection, a mechanical center differential, and auto-locking hubs, the 4WD Escalade Hybrid, like virtually all 4WD hybrids, is not designed for serious off-road use.

Standard safety features for the 2010 Escalade include four-wheel ABS, traction and stability control, dual front side-mounted airbags, three-row head airbags, rear parking assist technology, daytime running lights, front fog/driving lights, and the OnStar post-collision safety system. All this, of course, is piled into one of the more massive passenger vehicles on the road, giving it a tangible protective bulk, not to mention side-impact door beams and safety-cage construction.

Owners of the elegant 2009 Cadillac Escalade claim ride, performance, looks, and pampered luxury as reasons for owning this haughty behemoth, however, the Escalade does have its naughty quirks. Uppermost among owner complaints is a third-row seat that must be removed rather than simply folded for additional cargo space. Poor mileage for the gas-only Escalade trims, though expected, still has owners a tad miffed, while the hefty price tag, surly navigation system, ride-challenged, low-profile Hybrid tires, and lack of a Smart Key option also cause some small grumblings. All in all, however, the Escalade is a crowd pleaser that rewards owners with all the trappings of success.

What's your take on the 2010 Cadillac Escalade?

Users ranked 2010 Cadillac Escalade against other cars which they drove/owned. Each ranking was based on 9 categories. Here is the summary of top rankings.

Have you driven a 2010 Cadillac Escalade?
Rank This Car

I have been having issues with my 2010 Escalade. Several issues with Stabilitrak. Took it in first time and they replaced a bunch of spark plugs. Error message kept coming up and car ran super rough...

Why less power? Car jerks while driving. Can I drive 5 miles to dealer? Any recalls on this problem?

120 views with 3 answers (last answer about a year ago)

My 2010 Cadillac Escalade Will Not Change From Metric To English Displaying...

I followed the directions using the dic to change from kph to mph, selecting english. When I hit the reset button , it says English selected but still displays kph.

What mileage is best for a 2010 Cadillac escalade, when buying used.

I See A Short Ground Wire Is Hanging But Can't Find Where It Goes. Can You ...