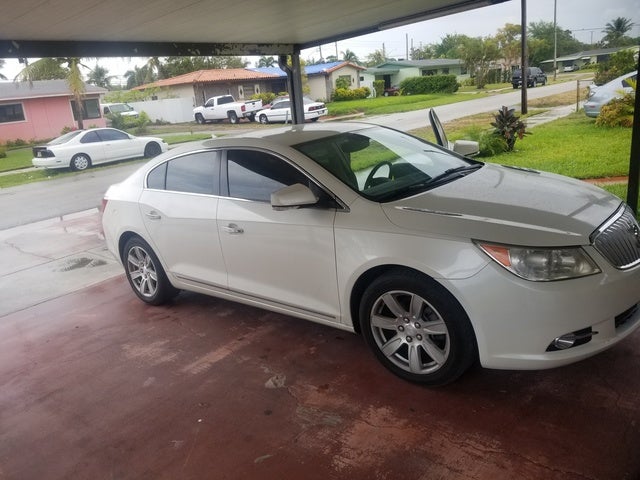 Snazzy new styling and a modern platform make the 2010 Buick LaCrosse a worthy contender in the upscale midsize sedan segment.

Visibility in the 2010 LaCrosse is somewhat compromised by its swoopy bodywork, and performance is adequate but not particularly thrilling, especially with the smaller engines.

Designed partly in China, Buick's new LaCrosse is a credible entry in the midsize sedan segment. Its undeniable good looks will lure buyers into showrooms, and its smooth, modern driving experience may convince them to buy a domestic car for the first time in years. While some would wish for more power or a bit more starch in the suspension, the intended market is likely to find the 2010 LaCrosse very much to its taste.

Slotting in the upper end of the midsize class, the LaCrosse is 197 inches long and rides on a 111-inch wheelbase. The five-passenger interior is quite spacious, offering 40.5 inches of rear legroom. Trunk space is only marginal, compromised by the large cabin and curvy bodywork.

There are three trim levels in the LaCrosse range. The base CX is offered only with front-wheel drive (FWD) and is currently powered by the smaller of the two V6 engines, a 3.0-liter unit. Later this year the CX will be equipped with a smaller, inline four-cylinder (I4) engine as a value-leading configuration. Standard equipment on the CX includes power windows, locks, and driver’s seat, keyless entry, and OnStar.

Stepping up to the mid-level CXL trim brings a big upgrade in the equipment level. Heated leather seats are standard, and the cabin features dual-zone climate control. AWD is available as on option. Filling the top spot in the range is the LaCrosse CXS, which features a larger 3.6-liter engine standard. Also included in the CXS are a hi-fi Harman Kardon stereo and ventilated seats.

While not offered at press time, the base engine for the LaCrosse CX will eventually be the corporate 2.4-liter Ecotec four-cylinder. Producing 182 hp and a meager 172 lb/ft of torque, this mill will likely have difficulty keeping up with the competition in the upper-midsize class. Better, but far from perfect, is the 3.0-liter V6. Though it makes a commendable 255 hp, the small V6 can muster only 217 lb/ft of torque, which leave it still struggling to tow the big LaCrosse around, though it is pleasingly refined. The 3.6-liter V6 offers much improved performance from its 280 hp and 259 lb/ft of torque, though that engine is not available in AWD trims.

While not delivering tire-shredding power, both V6s are thoroughly modern and rev smoothly. All engines are mated to a smooth six-speed automatic transmission. The optional AWD system is a nice feature for dealing with snowy roads, though it further compromises the LaCrosse's already less-than-stellar fuel economy. In fact, the AWD CXL with only the small six under the hood can manage only 16 mpg on the EPA city cycle, despite having six gears.

The Epsilon II platform that underpins the 2010 LaCrosse is a fresh design shared by the popular Europe-only Opel Insignia. While softened for the American (and Chinese) market, the independent suspension still offers a comfortable ride with reasonably well controlled body motions. When pushed hard the LaCrosse reverts to moderate under-steer and never becomes unsettled, though no one will mistake it for a sports car.

The LaCrosse's modern platform also pays dividends in noise and vibration. Its generous level of sound deadening, called Quiettuning, includes triple door seals and a laminated windshield. Combined with the refined powertrain and rather conservative all-season tires, the LaCrosse goes down the road very quietly and smoothly.

Elegant styling and plush materials grace the interior of the 2010 LaCrosse, giving it an upscale feel. Gone are the hard, unyielding plastics of recent GM offerings, replaced with soft-touch materials that are exceptionally well fitted. The design features a sweeping belt-line that envelops the occupants while at the same time remaining open and airy.

Space inside is quite generous, and rear-seat passengers are treated to plenty of legroom. The seats are comfortable and relatively supportive, and the standard cloth upholstery is of high quality, while the leather seats on CXL and CXS trims are glove-soft and feature standard heating and optional ventilation. The large center stack looks modern and places all buttons and controls within easy reach, although the design is a bit busy and requires a little familiarization.

Interior features hit all the right notes; power accessories (including an 8-way power driver’s seat) are standard, along with keyless entry, air conditioning, and a CD stereo. Navigation, a nifty rear-seat DVD system, and a power sunroof are optional and can upgrade the experience to true luxury-car levels.

Standard OnStar coverage for one year is a highlight of the comprehensive safety package on the new LaCrosse. GM has done a good job selling the benefits of its in-car emergency response system that can also provide directions or connect phone calls. Front, side, and curtain airbags are standard on all trim levels, as are antilock brakes and seat-belt pre-tensioners. The new LaCrosse received a reassuring five-star rating in all federal front and side impact tests. Standard stability control should help provide reassuring handling in dicey conditions.

Owners of the 2010 LaCrosse are most impressed by the car’s styling and driving dynamics, a radical change from Buicks of yesteryear. The small trunk and rather poor fuel economy, combined with lackluster power for speedy drivers, held the LaCrosse back from near perfection.

What's your take on the 2010 Buick LaCrosse?

Users ranked 2010 Buick LaCrosse against other cars which they drove/owned. Each ranking was based on 9 categories. Here is the summary of top rankings.

Have you driven a 2010 Buick LaCrosse?
Rank This Car

Engine loses power down to 30mph. After shutting the engine off and restarting car the engine goes to full power.

After a long day of working i parked my car & i woke up the next morning to take my daughter to school and my 2010 Buick LaCrosse wouldn’t start crank it just made a little click noise .but After ...

Everything on center console is dead AC controls radio controls. .Great time to be without AC leaving for vacation tomorrow appreciate some help . please. One more thing the radio controls quit a...

How To Fix Gas Leaking In Oil?

I have a 2010 Buick LaCrosse it is running rich gas is pouring in the oil. What is wrong? I have taken it in and I have been told it could be many things please assist?