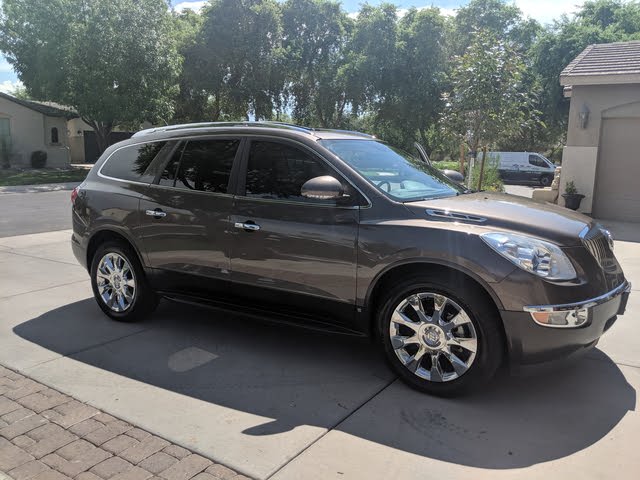 The 2010 Buick Enclave's contemporary design, roomy interior, sedan-like ride, and overall build quality, as well as its ability to seat up to eight passengers, remain its most notable features.

The '10 Enclave's fuel-economy numbers remain a sore spot with some drivers, while others note problems with visibility out the back.

Although the 2010 Buick Enclave carries over from the previous year with few changes, it remains a good value for drivers seeking a luxury-oriented family hauler. Its smooth ride and quiet interior are among its many positive points, and although its standard feature list doesn't quite match those of other upscale crossover vehicles, the '10 Enclave should appeal to a broad range of drivers seeking a reliable, flexible, and comfortable alternative to a traditional SUV.

The Buick Enclave crossover receives a few minor updates for 2010, including new wheels and new exterior colors. In addition, Buick offers the Enclave in three trim levels for 2010, expanding on the previous year's two trims. The entry-level CX trim carries over unchanged for 2010, but Buick splits the previous year's premium CXL trim into two trim levels, dubbed the 1XL and 2XL. All three trim levels for 2010 come with front-wheel drive or an intelligent all-wheel-drive system, which monitors traction on all four wheels and shifts power to the wheels with the best grip when it detects slippage.

Now in the fourth year of its current generation, the four-door Buick Enclave retains its aerodynamic sedan-like lines and distinctive exterior elements, including its signature chrome waterfall grille and side portholes, which frame the hood. The upscale interior carries over from the previous year as well, with its balanced mix of comfortable seating, technological advances, and generous cargo space. The luxury crossover vehicle seats up to seven passengers in three rows, including front bucket seats, second-row captain's chairs, and a third-row bench seat, which can accommodate three adults. With an optional second-row bench seat, the Enclave can seat eight passengers. Cargo space ranges from just over 23 cubic feet with all three rows of seats in place to 115 cubic feet with the second and third rows folded down. 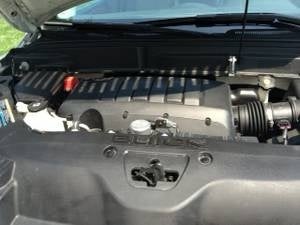 The Enclave's 3.6-liter, direct-injection V6 engine with variable valve timing generates 288 hp and 270 lb-ft of torque. The engine drives the Enclave from 0 to 60 in about 8.2 seconds and links to a six-speed automatic transmission designed to deliver smooth, efficient shifting. The transmission comes equipped with automatic grade shift logic, which senses when the vehicle is traveling downhill and automatically shifts into a lower gear. This feature proves especially helpful when you're towing a heavy load, Buick notes. With an optional Trailering Provision Package, the Enclave can tow up to 4,500 pounds.

The 2010 Buick Enclave rides on a four-wheel "premium ride" independent suspension, which provides optimal stability and ride comfort by enabling each wheel to react independently to all types of road surfaces. Its smooth, sedan-like ride has received high marks from drivers and reviewers. The Enclave handles well in tight curves, with responsive steering and minimal body roll. In addition, passengers will find the Enclave's ride to be quiet, thanks to Buick's QuietTuning process, which uses acoustic laminated glass, triple door seals, and sound-deadening materials in the floor and engine compartment to reduce exterior noise and vibration.

The front and second-row seats will keep passengers comfortable over long distances. However, ride comfort drops a notch in the third row, although passengers will find plenty of legroom, thanks to the SmartSlide feature, which makes it easy to move the second-row seats back or forward to adjust legroom in either the second or third row. In addition, the feature enables owners to accommodate just about any type of cargo. Numerous cubbies throughout the cabin, as well as a cargo storage area under the rear floor, provide plenty of additional storage space. All trims come with a power liftgate to ensure easy access to the rear cargo area.

CX trims come with cloth-upholstered seats, while the upper-end luxury-oriented 1XL and 2XL trims pamper occupants with leather seats that are heated in front. Optional heated and cooled seats are available in the higher-end trims. Other options include a power tilt/sliding sunroof and a rear parking assist system with a rear-view LED display.

All Enclave trims come standard with an AM/FM stereo system with an MP3 player input jack and XM satellite radio. Drivers can opt for a number of audio and entertainment-system upgrades, including a Bose 10-speaker system and a surround-sound CD/DVD entertainment and navigation system.

While the 2010 Buick Enclave has not yet been subjected to safety tests, the 2009 Enclave achieved the highest possible score of five out of five in the National Highway Traffic Safety Administration's front and side crash tests. Standard safety features include dual-stage front airbags, side-impact airbags for the driver and front passenger, and head-curtain side-impact airbags, which protect passengers in the second- and third-row seats. 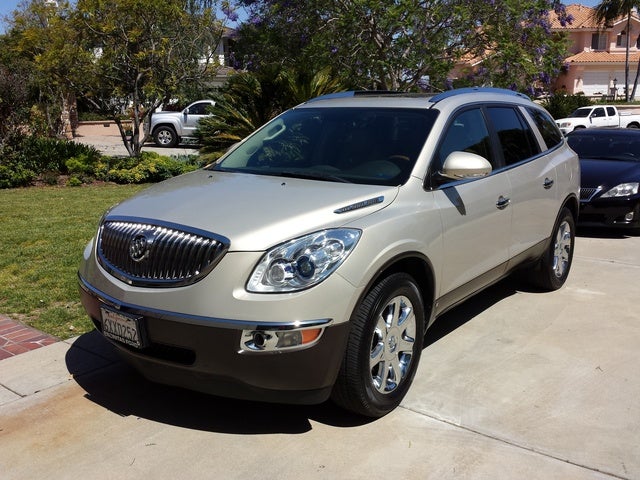 The Enclave's aerodynamic exterior, smooth ride, and quiet, comfortable cabin, as well as its ability to carry up to eight passengers, appeal to many owners. The Enclave's ease of handling, expansive cargo space, and overall build quality also draw good marks from owners. However, the Enclave's fuel economy numbers remain a concern for many owners. Some also find fault with blind spots out the rear, and some note overall visibility problems with the Enclave's design. In addition, some owners note sluggish acceleration, due in part to the Enclave's heavy weight.

Users ranked 2010 Buick Enclave against other cars which they drove/owned. Each ranking was based on 9 categories. Here is the summary of top rankings.

Have you driven a 2010 Buick Enclave?
Rank This Car

Hello my name is Joel and I have a 2010 Buick Enclave and it's actually my old lady's vehicle and she brought this to my attention a few days ago that the air is only blowing out of the dash, the...

104 views with 2 answers (last answer about a month ago)

Why Does My Engine Run Hot?

Anybody know what else could have my car to continually run hot? I can’t drive it not even 5 minutes before it starts to run hot. I’ve gotten a new thermostat, plenty of oil and transmission fluid...

4 views with 3 answers (last answer about a month ago)

AVA is a liar, careful buying 2010 Buick Enclave, BS title, poor emisions, every day another issue. THEN CANCELS SHOWING UP!

What Would Cause Misfire On 2,4,6 Coil Packs