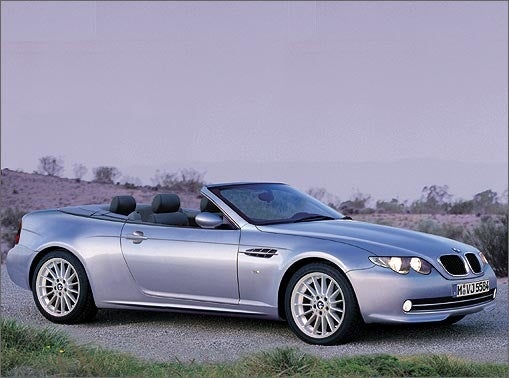 All-new last year, BMW’s flashy Z4 roadster continues to impress for 2010 with an intoxicating blend of style and performance. Offered only as a rear-wheel-drive two-door, the Z4 offers BMW’s first folding hardtop, made of aluminum, which transforms the car from a quiet coupe to an open roadster with the press of a button. While the updated driving experience is mostly classic BMW (more on that later), it is the new Z4’s stunning design that has people talking. The long-hood/short-deck profile of the Z4 speaks to classic roadster design, while the complex avant-garde shapes lend a modern, fresh look that will definitely get noticed. The intricate shapes of the body, particularly the constantly shifting side character lines, seem almost origami-like in their pattern. With the top raised the new Z4 still maintains great proportions, and it manages the rare trick of looking both sporty and elegant at the same time.

The Z4 carries the crisp design theme into its well-thought-out interior. While most roadsters (including the outgoing model) have small cabins, the new Z4 has been laid out with comfort in mind. Elbow and shoulder room is especially generous for this class, and even with the top up, the space doesn’t feel confining. BMW has cleverly made room for storage spaces throughout the interior, including a useful shelf behind the seats. Unfortunately, the trunk is almost entirely taken up by the complex top mechanism; when the roof is down, it offers only 6 cubic feet of storage space.

In typical BMW fashion the seats are excellent: supportive and comfortable with a wide range of adjustment. Likewise the organic relationship between the pedals, steering wheel, and shifter contributes to the top-notch driving experience. The well-fitted dash features high-quality materials, and the integration of the climate control dials into the wood veneer is a slick, vintage touch. A large LCD screen handles navigation duties in upper trim levels and also serves as the focal point for the second generation of BMW’s much-maligned iDrive system. While simpler to operate than the first iDrive system, this new iteration still over-complicates many basic tasks and requires far too much driver input.

Powering the 2010 Z4 are a pair of 3.0-liter inline six-cylinder (I6) engines, a naturally aspirated unit that makes 255 hp and 220 lb-ft of torque, and a twin-turbocharged version of the same motor that churns out 300 hp and 300 lb-ft of torque. Both engines feature a turbine-like willingness to rev that is simply addictive behind the wheel. While the naturally aspirated engine is no slouch, the hopped-up turbo motor delivers a wicked punch that comes on quickly with no discernible lag.

A six-speed manual gearbox is standard on both motors and features the precision action that has become a BMW hallmark. An optional six-speed automatic is available for the base engine; while it shifts confidently, the slush-box greatly impinges on driving excitement. The turbo engine can be mated to an optional seven-speed dual-clutch electronic gearbox that provides most of the fun of a true manual without the hassle of a clutch in traffic.

Two trim levels are offered in the 2010 Z4, denoted by a rather clumsy nomenclature. The sDrive30i has the base trim and features the naturally aspirated engine, while the up-level sDrive35i gets the turbocharged motor and the optional dual-clutch gearbox. For those who can live without the extra power, the sDrive30i provides the purest driving experience among Z4s. While the electric power steering doesn’t have as much feel as the old hydraulic BMW setup, turn in is still immediate, and the car's handling limits are high. With the top down the chassis is commendably rigid, with no discernible cowl shake, and provides a solid mounting point for the four-wheel independent suspension.

An optional sport package adds larger wheels and a host of Adaptive M suspension revisions that increase the level of grip available, but ultimately dilute what should be an elemental driving experience. Likewise the sDrive35i’s advanced turbocharged powerplant and available dual-clutch gearbox provide plenty of grins, but despite offering near-supercar levels of acceleration (0-60 times as low as 4.8 seconds), they induce a sense of technical overload that seems out of place in a roadster.

Also overload-inducing is the Z4's price; an sDrive35i with all the boxes checked lists at over $70,000, frankly an absurd number for a small convertible. Even a base sDrive30i wears a $47,000 sticker before options are added; that means at almost fifty grand the manually adjusted seats in your new Z4 will be upholstered in vinyl. But then the Z4 is not a rational purchase. With the top down on a sunny day, running the silky-smooth engine through the gears is a Zen-like experience. It’s the kind of car that makes you smile whenever you sit behind the wheel and turns heads as you cruise down the street. On an emotional level it’s well worth it.