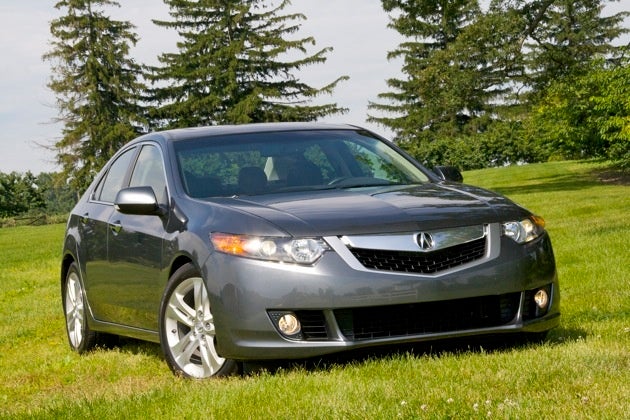 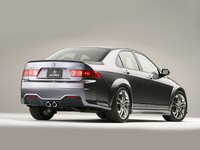 The Acura TSX's new optional V6 engine, which provides good performance, gives owners a choice of two engines for 2010, although many still like the fuel economy of the peppy four-cylinder powerplant, which comes as standard equipment in the TSX.

Interior room, especially in the back seat and trunk, remains tight, and some passengers find the TSX's ride a bit rough and steering too numb.

Acura's entry-level 2010 TSX luxury sedan offers a good combination of features for owners who seek an upscale commuter for around-town driving. The high-tech, luxury-oriented cabin draws the most positive comments from owners, and many like the fuel economy of the standard four-cylinder powerplant, but by offering a new V6 engine as an option for 2010, Acura aims to head off many of the complaints voiced in previous years about the TSX's lack of sport-oriented performance. Despite a few drawbacks, the TSX presents a good value for owners seeking an affordable luxury sedan.

Following a major revision in 2009, the Acura TSX midsize sedan receives a number of significant updates for 2010. For owners who prefer more spirited performance, Acura offers the 2010 TSX with a new, optional V6 engine, which joins the sedan's existing four-cylinder powerplant. When equipped with the new V6, the TSX also includes such new features as an upgraded braking system, a retuned suspension, a performance-oriented exhaust system with dual exhaust pipes, and a revised front end with openings for improved engine cooling. In addition, the V6-equipped Acura TSX receives new 18-inch wheels with Michelin tires and an upgraded automatic transmission with V6-specific gear ratios as standard equipment.

The front-wheel-drive, five-passenger TSX retains its clean, contemporary exterior design, including its grinning double-plenum front grille, which has drawn mixed comments from owners and reviewers. Xenon high-intensity headlights and a front chin spoiler create a bold impression up front, while pronounced wheel wells add a muscular feel along the sides. Both functional and stylish, the thin A-pillars ensure good visibility out the front while adding to the TXS's sleek appearance.

The Acura TSX comes with either a manual or automatic transmission for 2010. In addition, owners can outfit the TSX with an optional Technology Package, which adds a navigation system with real-time traffic and weather, a 415-watt, 10-speaker premium audio system, a GPS-linked and solar-sensing climate control system, and voice recognition for the navigation and climate control systems, among other features. 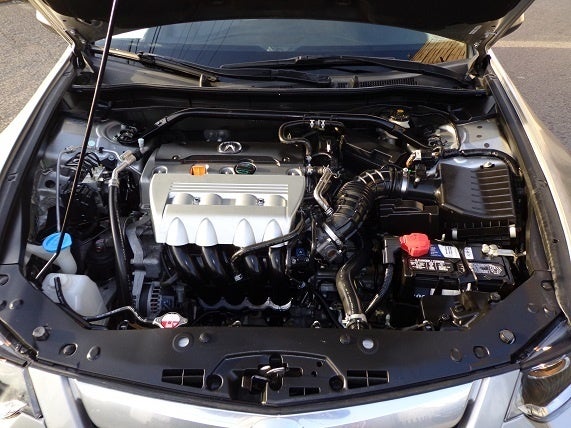 The base TSX retains its 2.4-liter, double-overhead-cam, i-VTEC inline four-cylinder (I4) engine for 2010. This engine produces 201 hp and 172 lb-ft of torque at 4,300 rpm when linked to a six-speed manual transmission with a short-throw shifter. When mated to a five-speed Sequential SportShift automatic with steering-wheel-mounted paddle shifters, the engine's torque drops slightly to 170 lb-ft. The four-cylinder posts EPA-estimated fuel economy numbers of 20/28 mpg with the manual transmission and 21/30 with the automatic.

The new, optional 3.5-liter, single-overhead-cam VTEC V6 aluminum-alloy engine generates 280 hp and 254 lb-ft of torque when connected to the upgraded automatic transmission designed especially for it. The EPA estimates fuel economy numbers for the new V6 at 18/27 mpg. Like the four-cylinder, the new V6 engine requires no scheduled tune-ups for 100,000 miles. Both the four-cylinder engine and the V6 require premium fuel.

The '09 redesign widened and lengthened the TSX in an effort to increase stability and minimize body roll, as well as expand interior passenger space. Owners call the TSX's ride firm, controlled, and confident, with a good grip of the road, although some owners find the ride a bit harsh on longer trips. The TSX employs Electric Power Steering, which was designed to deliver precise input during performance driving. However, some owners find the steering too numb, with little to no feedback. When equipped with the new V6, the 2010 TSX features a retuned suspension with upgraded front springs and recalibrated Showa dual-mode suspension dampers, which help improve handling and performance, according to the automaker.

The base TSX rides on 17-inch wheels with high-performance all-season tires. Sound dampening materials help ensure a quiet ride, with road noise kept to a minimum. Despite its expanded interior, the TSX's cargo space remains on the small side, at just 12.6 cubic feet. However, owners will find plenty of spaces to store gear inside the cabin, thanks to 13 storage spaces. In addition to several beverage holders, drivers will find at least six storage spaces close at hand, including a center covered storage bin with a USB port, an enclosed change tray, and a covered center console compartment. Cubbies for rear-seat passengers include dual beverage holders, bottle holders in the door panels, and front seatback pockets.

The instrument panel displays a three-dimensional treatment, which helps ensure easy readability, although it takes some owners awhile to get used to the arrangement. All controls are illuminated for ease of operation. A multi-information display allows drivers to personalize some vehicle functions, such as how long interior lights and headlights remain on after the driver switches off the ignition. A three-spoke, leather-wrapped steering wheel includes audio and cruise controls, as well as controls for the multi-information display and the Bluetooth wireless system.

For entertainment, the TSX comes equipped with a 360-watt, seven-speaker audio system with a USB interface, iPod integration, a 6-CD player, XM satellite radio, and an MP3 input jack. The system features a subwoofer and a readout that displays audio information.

Options include a navigation system, which serves as the centerpoint of the optional Technology Package. The system features an 8-inch display, a DVD-based database, and voice recognition. It also features AcuraLink real-time traffic and weather, as well as Zagat Survey restaurant reviews. Other options include a rear-view camera and Active Sound Control, which uses a reverse-phase audio signal to reduce engine noise in the cabin.

The 2010 TSX received a top rating of five stars during front and side-impact crash tests from the National Highway Traffic Safety Administration, and a top rating of Good for front and side-impact tests from the Insurance Institute for Highway Safety. The TSX comes standard with four-wheel antilock brakes supplemented by brake assist and electronic brakeforce distribution, both of which aid drivers in stopping the vehicle safely during emergency maneuvers or in slippery road conditions. Traction and stability control also come standard and deliver good road grip at high speeds. Six airbags include dual front-side and side curtain bags for both rows.

Most owners like the 2010 TSX's extensive array of standard luxury features, as well as the fuel economy of its base four-cylinder engine. The four-cylinder provides adequate power for most owners, especially when linked to the six-speed manual, but owners appreciate the option of the new V6, which gets good marks from early reviewers for its spirited performance. Some find the premium fuel requirement a distraction, however, noting that similarly equipped Hondas achieve good performance on regular gasoline. In addition, some consider the engine a little too noisy.

Generally, owners like the TSX's appearance both inside and out. The TSX's smooth ride gets good marks from most owners, although some find the ride a bit harsh. The TSX's reliability and low maintenance requirements also impress many owners. Overall, owners say the 2010 Acura TSX provides a good blend of peppy performance, upscale amenities, fuel economy, and overall value.

Users ranked 2010 Acura TSX against other cars which they drove/owned. Each ranking was based on 9 categories. Here is the summary of top rankings.

Have you driven a 2010 Acura TSX?
Rank This Car

Star But Turn Off Inmediatlly

I change the starter on my acura tsx 2010 the car crank great but once it turn on the revolution got crazy and the car turn off immediately. any suggestions?

After replacing the battery the radio and navigation locked up and needed a code. After retrieving the codes the navigation unlocked but radio failed to do so. Gave ENTER ERROR 1 and after repeated ...

I Have A TSX 2010 Is Ok To Use Anything Less Than Premium Gas Like Exon Plu...

Can I use other gas than premium like Exon Plus?

What Is A Flood Damage Title?

Have a 2010 Acura TSX. When I get on highway and reach 60 I can hear this high pitched whistling/screeching sound.