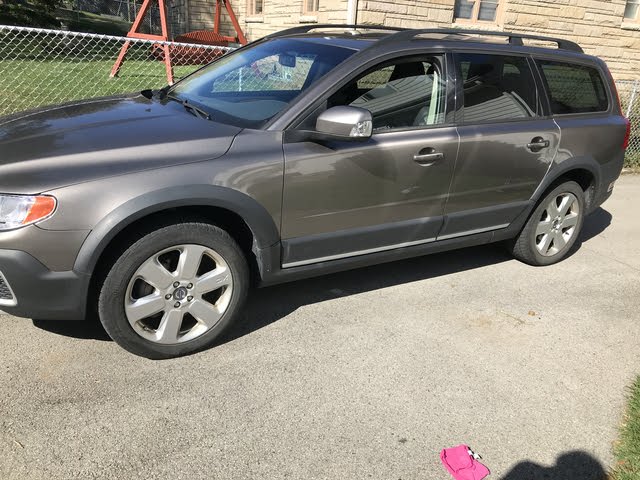 The 2009 Volvo XC70 raises the bar - literally - against its lower-to-the-ground cousin, the V70, with off-road capabilities, all-wheel drive, and added ground clearance. Its looks are sportier, it has more available horsepower, and it comes with all-terrain tires. With an extra 3 inches of clearance, the XC70 shows off as a crossover, bridging the gap between a full-fledged SUV and the quaint but stylish V70 wagon. There are two available trims for the recently redesigned XC70, the 3.2 and the all-new T6, introduced in the fall of 2008.

The 3.2's powerplant is a 3.2-liter inline-six engine, capable of 234 hp and running at an EPA estimated 15/23 mpg. The T6 adds a little more punch with a turbocharged 3.0-liter inline six-cylinder engine, hammering out 281 hp and claiming 15/22. Both trims are available only in all-wheel drive and with a six-speed automatic transmission. For those with a penchant for shifting, the XC70 offers geartronic shifting that lets you manually shift with the flick of a wrist. Volvo recommends premium fuel for all XC70s.

With a tighter suspension than the V70, the XC70 is said to suffer in the smooth-ride department, but the losses in ride quality are not major and can be overlooked for its other added features. For example, when comparing the XC70 to larger SUVs on the market, the Volvo comes across like a sports car, with superior agility and cornering. Being built on the same frame as the S80, there is no shortage of head- and legroom for front passengers. The interior has been rated as comfortable and well-conceived, but the options packages that allow for a luxury experience hike the price up dramatically. New for 2009 is the availability of what Volvo calls Electronic Hill Descent Control, which uses both the brakes and engine compression to slow the vehicle on steep or long downhills.

In addition to the descent control, the XC70 is jam-packed with safety features both standard and optional. Standard in the XC70 are antilock brakes, an antiskid system, traction control, and front and side curtain airbags. Optional safety features include a blind spot information system (BLIS); adaptive cruise control, which assists with braking in emergency situations; active dual xenon headlights that follow the path of steering; and a personal car communicator that gives lets you lock, unlock, or check to see if there is someone in your car from a distance.

I Get FM Reception, But Not AM...what Gives?

I just bought this one-owner car. It's a 2009 xc70. When I try to get AM radio, all the numbers show up, but absolutely no sound, not even static. FM is OK with great sound quality. I could not find...