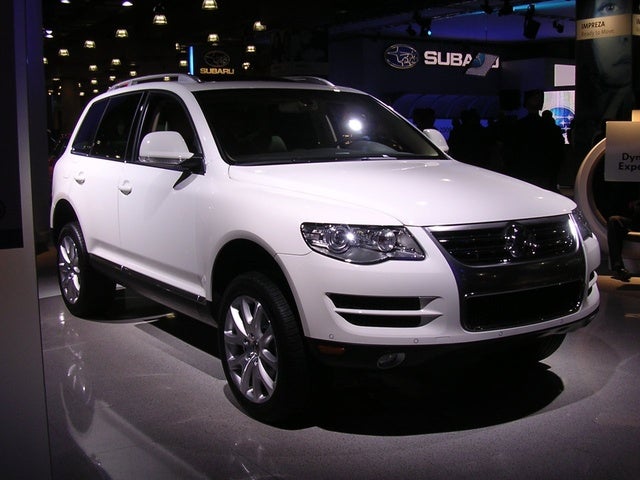 With probably the hardest name to spell of any SUV, the 2009 Volkswagen Touareg seems caught between markets. On the one hand, it strives to appeal to the high-end consumer with its upscale SUV comfort and cost, which is comparable to luxury Mercedes and Lexus SUVs. On the other hand, its superior off-roading AWD capability targets a more rough-and-ready crowd. For these reasons, the Touareg has never quite found its niche.

Relatively unchanged since last year, the 2009 Touareg adds a few new options, such as adaptive cruise control and lane departure assist, and updates its navigation system to be hard-drive based. The big news, however, is the disappearance of the turbodiesel TDI engine, which may disappoint buyers conscious of fuel costs. As of 2009, this AWD SUV comes in only two trims, based on their respective FSI engines. The VR6 houses a 3.6-liter, 280-hp V6 that gets 16/20 mpg. The 4.2-liter V8 puts out 350 hp with 12/17 mpg. Both engines come paired with a 6-speed automatic. Its maximum towing capacity of 7,716 pounds surpasses many of the Touareg's competitors.

A host of creature comforts hints at the 2009 Touareg's luxury trappings. The VR6 features 18-inch wheels, power front seats, heated seats, leather upholstery, a power liftgate, sunroof, and wheel-mounted audio and cruise control, with the V8 adding wood trim, memory settings, an adjustable air suspension, and larger 19-inch wheels. The adjustable suspension increases ground clearance to 11.8 inches, which comes in handy when taking this SUV off road. The rugged AWD system features low-range gearing and a locking center differential. ABS brakes, traction and stability control, Hill Descent Control, and dual front-side and side curtain airbags for both rows make up the safety equipment, which earns the 2009 Touareg five stars from the NHTSA.

Lack of rear passenger room and a small cargo area (31 cubic feet, expandable to 71) might help explain the Touareg's lackluster sales. Unlike many competitors, the Touareg does not offer a third row, even as an option. Rear seats do split-fold flat, but require a cumbersome process to do so. The cargo area sits high and lacks depth. A roof rack is standard on both trims.

The Touareg 2's heavy curb weight (it's one of the heavier SUVs on the market) puts a lot of pressure on the underpowered V6, and reviewers find it contributes to ponderous steering and significant body lean. Other complaints include the lack of a third row, difficult entry and exit to the second row, and poor fuel economy. For a luxury SUV, reported interior rattles also seem disappointing. On the upside, the 2009 Touareg exhibits outstanding off-road performance, powerful acceleration with the V8, and a long list of standard features.

What's your take on the 2009 Volkswagen Touareg 2?

Have you driven a 2009 Volkswagen Touareg 2?
Rank This Car