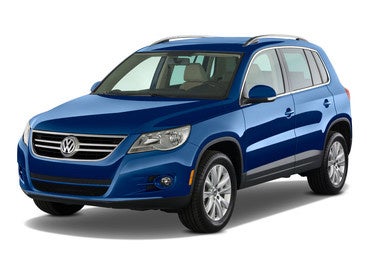 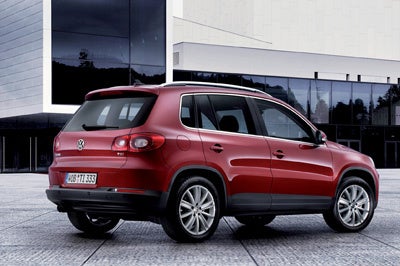 Slotting in under the bigger Touareg, the equally athletic-looking new 2009 Volkswagen Tiguan represents the German automaker's first foray into the crossover market. The compact SUV competes with the likes of the RAV4 and CR-V, but adds a level of ruggedness both in its looks and its driving performance. The front-wheel drive Tiguan seats up to five in two rows, and all but the base trim can be equipped with automatic all-wheel drive designed for expert soft-roading. Lacking low-range gearing, and with a ground clearance of only 7.3 inches, the CUV is not intended for the truly backroads experience offered by the Touareg, but it can tackle uneven, slippery, and tricky surfaces better than most CUVs in its class.

The new 2009 Tiguan comes in S, SE, and SEL trims. European and U.S. versions carry different engine choices. Europeans get a 1.4-liter Twincharger inline-four engine and 6-speed manual that deliver 168 hp. An Offroad Mode is also available, featuring Hill Descent and Hill Climb, and a Track and Field package boosts offroad performance by offering a 28-degree approach angle up front. In the U.S., the Tiguan will carry the GTI's 2.0-liter turbo four cylinder, which puts out 200 hp and 207 lb-ft of torque. Fuel economy averages 18/25, about normal for this class. Transmission choices include a 6-speed manual and a 6-speed DSG automatic.

The 4Motion all-wheel drive system comes standard in Tiguans equipped with the automatic transmission. It defaults 90% of torque to the front wheels, but automatically distributes it to the rear wheels when needed. The CUV shares its platform components with both the Rabbit and GTI, and its Macpherson strut front and four-link rear suspension give the Tiguan a car-like feel on the road, with good cornering and road grip.

The 2009 Tiguan comes in slightly smaller than the CR-V, but feels spacious and airy on the inside, thanks to a high greenhouse. An optional panoramic moonroof, which measures 13 square feet, opens up the cabin considerably. Rear seats split-fold 60/40 and also slide forward and aft six inches, to accommodate longer legs or more cargo. Both rows have a reclining feature. As such, head and legroom easily satisfies passengers over six feet tall, even in models equipped with the sunroof. Along with the folding rear seats, the front passenger seat also folds flat in case you need to carry longer objects such as skis or plywood. The cargo bay, equipped with tiedowns, starts out at 16.6 cubic feet, but expands to 56.

A Prevent and Preserve Safety system consists of 45 different safety features and includes ABS brakes, traction and stability control, and dual front-side and side curtain airbags for both rows. The 16-inch wheels can be replaced with 17- or 18-inch ones. The 2009 Tiguan is also the first SUV to offer optional parking assist that automatically parallel parks for you. Another nice option is the electronic parking brake with hill holder function, that helps prevent rollback in Tiguans equipped with the manual transmission.

Early test drivers come back impressed with the energetic handling dynamics of the 2009 Tiguan, which exhibits a tight turning radius, precise steering with good driver feedback, a smooth and quiet ride, and supportive seats well-suited for long road trips. The light weight of the CUV (under 3400 pounds) makes good use of the engine, and the firm chassis feels solid and safe on the road. Simple and convenient ergonomics, attractive athletic looks, and high-quality Volkswagen cabin materials lend an upscale feel to the Tiguan. Complaints include the low ground clearance, lack of a third row option, and the need for premium gas. Some reviewers don't feel the 2009 Tiguan stands out from the pack enough to justify its much higher pricetag.

What's your take on the 2009 Volkswagen Tiguan?

Have you driven a 2009 Volkswagen Tiguan?
Rank This Car

Repair Or Buy Another Vehicle

I have a 2009 vw Tiguan dealer will charge 10,000 for new complete motor is it cheaper to sell car or to have a used one put in

Daughters 2009 tiguan has an error code on the info screen. She went about 6k on an oil change. After that the message "high oil pressure turn off engine". Any ideas?

I have a 2009 Tiguan. The EPC light randomly comes in and when it does, i either lose power at about 2500 RPM or completely. I restart the car and it usually clears but always comes back. It seem...

439 views with 2 answers (last answer about a year ago)

Just brought used 09 VW Tiguan, the fan keeps running even after I turn off the engine. Why?

579 views with 1 answer (last answer about a year ago)