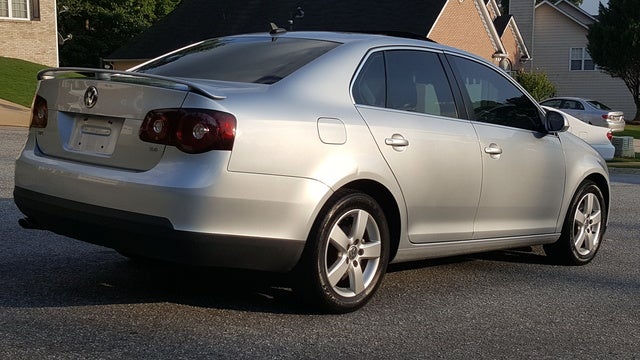 Available with three different engine choices - including a new, efficient diesel - the '09 Jetta excels as one of the more versatile, roomy, and comfortable compacts available.

A bland and unexciting exterior leaves the '09 Jetta looking positively outdated when lined up against the more stylish Civic and MAZDA3, and the engine choices can feel underpowered in this heavy compact. 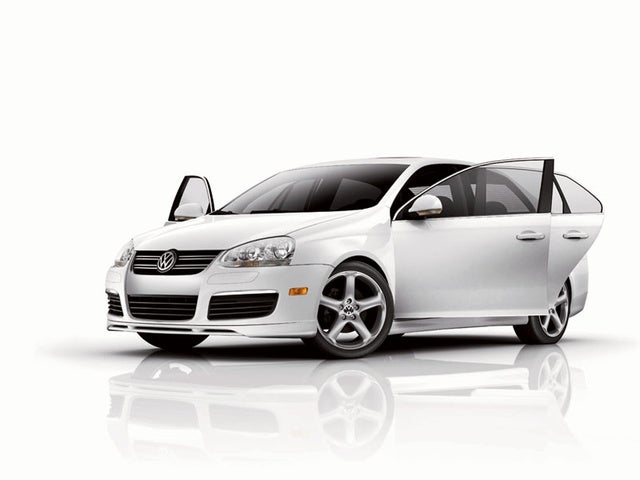 While the '09 Jetta won't take home any awards for sexy styling, it offers young professionals a solid, well-built ride. By reintroducing a clean diesel engine, the Jetta should also appeal to families needing extra space and buyers looking to increase fuel savings while reducing environmental impact.

The Jetta continues to hold the spot as Volkswagen's top seller around the world. This front-wheel-drive compact sedan received a major overhaul in 2008, but the '09 Jetta adds a few more pleasant surprises, including the return of a diesel engine option. The gas-saving engine in the new Jetta TDi claims to be one of the cleanest burning diesels on the market and the first one to meet California's strict emissions regulations, thereby making it the first diesel to satisfy standards in all 50 U.S. states. Although it raises the price of the Jetta by $2,000, owners will receive a $1,300 tax break.

The '09 Jetta comes in five trims, starting with the base S, SE, and high-end SEL, and moving up to the performance-oriented GLI with its sport-tuned suspension and turbo engine. The new TDi diesel models itself after the SE and shares many of that trim's standard features. New for 2009, stability control is now standard across the lineup.

The '09 Jetta remains a sturdy and dependable family car, with an above-average safety record that has improved this year with the inclusion of stability control on all trims.

With the return of the diesel, the '09 Jetta now offers three different engine choices. As the most powerful trim in the lineup, the sporty GLI makes 200 hp and 207 lb-ft of torque with its 16-valve, 2.0-liter turbo inline four. Its confident acceleration and passing power is blemished only by some minor turbo lag problems.

The remaining S, SE, and SEL trims get their power from a 2.5-liter inline-five engine that puts out 170 hp and 177 lb-ft of torque, with fuel economy averaging 21/29 mpg, which is markedly less than the Honda Civic's. Both engines come paired with either a 5-speed manual or 6-speed automatic, except in the SEL, which comes only with a 6-speed sequential shifting DSG automatic.

The new TDi diesel works off the 2.0-liter inline-four to deliver only 140 hp, but its impressive 236 lb-ft of torque at a low RPM ratchets up the fun quotient. The 6-speed DSG automatic is the only available transmission. It meets the strictest emissions standards because it employs a common rail fuel injection system rather than the traditional urea injection for cleaning exhaust. In this system, instead of a fuel injector for each of its four cylinders, the TDi's diesel uses one injector for all cylinders, meaning higher injection pressures overall. This in turn leads to an increase in smoothness and power, with a simultaneous decrease in noise, smell, and emissions. The diesel engine also greatly improves the Jetta's fuel economy over the non-diesel trims to 29/40 mpg, with some owners reporting up to 50 mpg on the highway.

Along with being the cleanest diesel on the market, believe it or not, the TDI can also claim to be one of the quietest. Critics and owners rave about the imperceptible startup and the virtual elimination of knocks and grinds so common in diesels of the past. As an added bonus, that nasty diesel smell has also disappeared, making the TDi an even more attractive choice to drivers looking for fuel savings. With its smooth handling, tight cornering, and effortless acceleration, critics claim the '09 Jetta TDi to be just as fun and sporty to drive as the Volkswagen GTI. Owners echo these sentiments, singling out its fun drive, tight turns, and responsive handling and steering.

This competent sedan also delivers plenty of agility, as expected from this reliable German automaker, but some professional reviews report annoying engine vibration in the inline five. Its power seems inadequate for a car that weighs more than the larger Passat, and the '09 Jetta suffers from some acceleration lag and high torque steer. For its part, the GLI exhibits the corner-hugging, instant braking, and powerful acceleration expected from a sports sedan, though turbo lag is noticeable and the stiffer suspension means a somewhat harsher ride.

The S, SE, and TDi ride on 16-inch wheels, while the SEL gets 17-inchers and the sporty GLI grips the road with 18-inch alloys. Moving up in tire size increases noise levels and road sensation and minimizes bump absorption.

A spacious interior and large cargo capacity make the '09 Jetta stand out in the compact crowd. VW's capable compact offers 41 inches of front legroom, with rear passengers making do with a somewhat limited 35 inches. Headroom, even on trims equipped with a sunroof, is plentiful for tall adults, but for long trips the back seat is best left to children.

Rear seats split-fold 60/40 and feature an armrest/trunk pass-through, but they do not fold flat. In fact, reviewers found the rear seat folding operation awkward, requiring the seat cushions to be pushed up before the seat backs go down. In SE and SEL trims, the front passenger seat does fold flat to accommodate longer objects. The sedan's trunk holds 16 cubic feet, with split folding rear seats adding significantly to that total.
Critics and owners appreciate the cabin's overall comfort and the easily accessible and functional instrument panel with its blue lighting. High-quality materials with soft-touch edges pay testament to Volkswagen's reputation for quality and comfort. All trims feature a power driver's seat, with the base S offering two positions for the seat back and the top-of-the line SEL offering 12 positions and memory settings. Tilt and telescopic steering aids driver comfort.

Starting out with full power accessories, cruise control, and a CD/MP3 player in the S trim, both the TDI and SE add heated front seats, leatherette trim, a 6-CD changer with satellite radio, and a panoramic sunroof that makes the interior feel even more spacious. The SEL offers wheel-mounted audio controls and leather upholstery. An optional navigation system on all trims comes bundled with either a 6-CD changer for the S or an iPod adapter in all others, with some reports that the setup overcomplicates use of the audio system.

The addition of standard stability control to all trims makes Volkswagen the first automaker to supply this feature on every make and model in its product line. The NHTSA gives the 2009 Jetta high marks in crash tests, with four stars going to front impact and rollover and five stars to side impact. The '09 Jetta touts its standard Prevent and Preserve Safety System that includes 40 different safety features, among which are 4-wheel ABS brakes, traction control, and dual front-side and side curtain airbags for both rows. Rear side impact airbags are optional.

Early owners of the '09 Jetta offer up more compliments than negatives about their compact sedan. Overwhelming praise goes to the new TDi, with most drivers amazed by its quiet operation. One driver compares it to the sound-insulated ride and quality of a Lexus. Many point out the appealing combination of superior, EPA-surpassing fuel economy with a fun and sporty overall ride. Other highlights for '09 Jetta owners include the interior space and cargo capacity, expert handling, and solid dependability – all important considerations to those looking for a family car. Downsides focus mostly on the inline-five engine's lack of power and poor fuel economy, as well as Volkswagen's reputation for sketchy reliability.

Though reviews for the new TDi and SportWagen have yet to come in from CarGurus drivers, feedback for the unchanged 2008 sedans echoes that of '09 owners, with very few negative comments overall. Opinion seems to be split on the pros or cons of its 21/29 mpg, but all owners applaud the roomy trunk, comfortable interior, and smooth handling. Many report a fun ride, though several wish for more horsepower out of the inline five.

What's your take on the 2009 Volkswagen Jetta?

JennR1 ug misery problems now same sputtering odd higher speed seems ok barely made it home sigh...two MONTHS AGO man i was stuck in manteca same thing now really? what the hey have no one local to help me cell phone lost so many issues with as many! ive seen tonssss of peoples long list of issues online lol..Read them...ha! and weap selling junk.gads bet my mechanicWill!!!!! find>>>>>>> its a duh plugged catalicconverter. Adios.

Have you driven a 2009 Volkswagen Jetta?
Rank This Car

Fan Keeps Running After Car Is Shut Off

When i shut my car off the cooling fan continues to run. Sometimes if I restart the car and shut it off the fan wil turn off sometimes it won't and I have to take the fuse out to make it stop runn...

Suddenly Jolting Forward And Downshifting On Its Own

my car is reving and jumping forward then reving at gifh RPMs even when i let my foot off the gas and brake completely then downshifts hard making it unsafe and unavle to gain power to accelerate ...

So I Recently just got a 2009 VW JETTA SE 2.5 engine automatic- and I’ve had it about a month now - no check engine light has come on but I noticed the driving gets randomly rough and inconsistent. ...

My key goes in, will turn to accessory, but no further - it was getting hard to turn but now it will not turn at all

Back story: My 2009 Vw Jetta began overheating at idle, and cooled down as long as I was moving. I’d hear my fans going So assumed those were fine. The temperature gauge would only slightly go up....

588 views with 3 answers (last answer about a year ago)