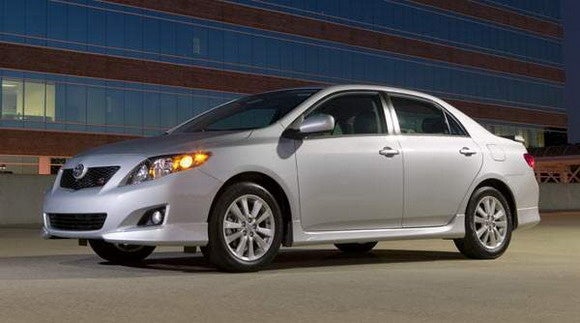 Minor power and styling changes maintain the '09 Corolla's reputation for reliability, fuel efficiency, and affordability, and the addition of more trims expands its driving options for a wide range of tastes.

Despite adding a sportier trim and attempting to jazz up the exterior, the '09 Corolla remains one of the more conservative compact sedans in its class and still falls behind the Civic and MAZDA3 in performance and handling. 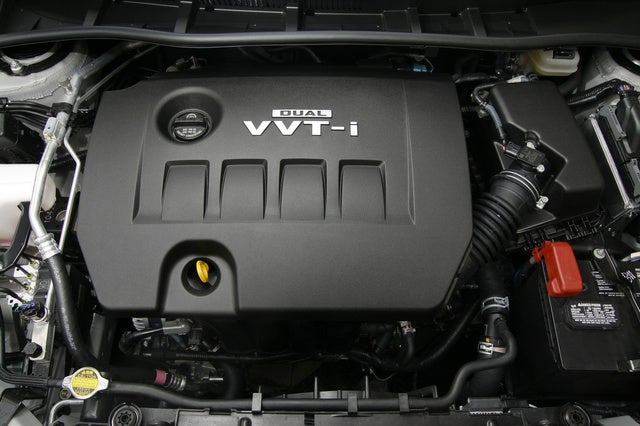 The '09 Corolla rightly appeals to buyers both young and old looking for an economical yet reliable compact sedan. No longer the entry-level car in Toyota's lineup (thank you, Yaris), the Corolla could have spread its wings and taken bolder steps in its design and performance, but chooses instead not to stray far from its successful formula. Though far from exciting, it delivers what its target consumer needs: dependability, a quality build, and top-notch fuel economy, all backed by Toyota's solid reputation.

Entering its 40th year on the market, the '09 Corolla continues to hold its place as the best-selling car not only in the world, but in the history of automobiles. The front-wheel-drive compact sedan has built up its loyal fan base by emphasizing quality, dependability, fuel efficiency, and affordability for families on a budget or first-time buyers. With the recent style and performance updates to the Honda Civic and new MAZDA3, Toyota decided to give the Corolla a refresh this year, perhaps in an attempt to keep attracting new and younger buyers into its fold.

On the trim front, the Corolla now offers five choices with something for everyone, young to old. More conservative buyers uninterested in gadgets and power accessories might opt for the economical Standard, while those looking for power accessories might prefer the LE or XLE. On the sportier side, the '09 Corolla offers the S and a brand-new XRS. Hardly roadburners, these trims lay claim to the sporty moniker mainly in stylistic ways, with added side sills, rocker panels, leather trim, and spoilers, though the XRS does house a new and more powerful 2.4-liter inline-four engine. The old 1.8-liter inline four gets a few more horsepower for 2008.

The '09 Corolla grows a bit this year and adds more slope to its roofline for a sleeker profile. From the exterior, it looks almost exactly like a scaled-down Camry. Its A and C pillars have been moved out to create a more spacious interior and better visibility, while lower ground clearance and a wider stance improve handling. Other additions for 2009 include electric power steering for the XRS, standard ABS on all trims, and optional traction and stability control. 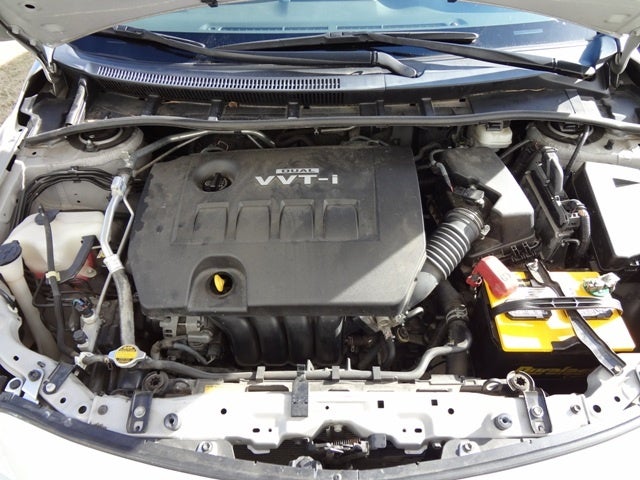 The '09 Corolla offers two engine choices, one brand new and the other tweaked for greater horsepower. Standard in all trims but the XRS, a 16-valve, 1.8-liter DOHC inline four puts out 132 hp, up 6 horsepower from last year. Equipped with variable valve timing and a choice of 4-speed automatic or 5-speed manual, the powertrain achieves an outstanding 27/35 mpg and 128 lb-ft of torque. In keeping with its economical heritage, it runs on regular 87 octane unleaded gasoline. For the sportier S trim, the 4-speed automatic is replaced by a new manumatic 5-speed.

As expected in a compact, acceleration requires major effort, particularly with the automatic transmission, but test drives reveal an adequately smooth and well-matched 5-speed manual. Its power boost still leaves the '09 Corolla behind the Civic, but it manages to maintain its superior fuel economy ratings despite a loss of 1 mpg from 2008. Some owners claim fuel economy as high as 40 mpg, well above the EPA estimates.

The new XRS trim gets a 16-valve, 2.4-liter inline-four, paired with the 5-speed manual or the new 5-speed automatic with manual mode, the first-ever in a Corolla. The extra gear in the automatic helps cut down on engine grind when trying to get up to speed, but the manual again is much more fun and responsive, since it lets the driver get more involved. The 2.4, the same engine used in the Scion tC, puts out 158 hp and 162 lb-ft of torque - not particularly powerful numbers, but they make a significant impact when placed in a small compact.

Standard and LE trims ride on 15-inch wheels with all-season tires, with the XLE and S moving up to 16-inchers and the XRS boasting 17-inch alloys. The larger tires are available as options. 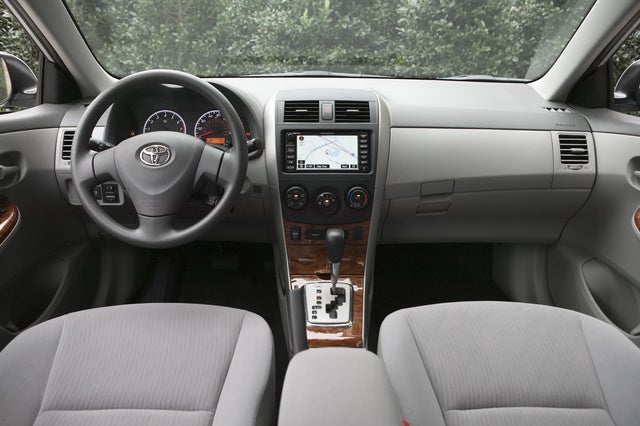 By adding more than 2 inches in width and lowering its ground clearance, the front-wheel-drive '09 Corolla claims to deliver a more stable and aerodynamic ride, though most reviewers noticed little change from previous years. The Corolla has always offered a conservative driving experience, with decent, dependable handling and a solid chassis that it shares with the Matrix, and the '09 model continues this tradition.

The new engine and manumatic transmission in the XRS bring the '09 Corolla up to speed with the Civic and MAZDA3, though more in a figurative than a literal sense, as both those models still pack a lot more punch in both engine power and driving dynamics. The XRS feels livelier than the other Corolla trims, but without a sport-tuned suspension or rear independent suspension, it does not handle or corner like its sportier Japanese rivals. Most critics gave the XRS tepid reviews after test drives, calling it capable, but hardly exciting or fun. As you step up in trims, increasing the size of the tires, the ride becomes both stiffer and harsher.

The new electric power steering winds up feeling vague and soft, and both critics and owners complain that it requires a lot of effort to straighten out the car when accelerating from a stop. Owners find the lack of steering feedback disappointing. ABS brakes have been added to all trims this year, but the XRS is the only trim to feature front and rear disc brakes. Drivers notice the braking feels very soft and spongy. Added sound insulation, a five-layer acoustic windshield, and vibration-control side windows contribute to a class-leading quiet cabin, which earns rave reviews from critics and drivers. Aside from wheel noise with the larger 17-inch tires and some initial whine during highway acceleration, owners liken the noise level to that of a Camry or Lexus. 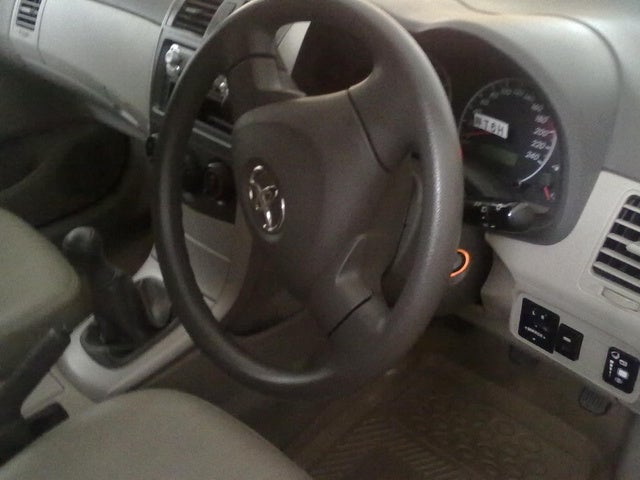 Reviewers and owners mention the roomy interior of the '09 Corolla, which adds 2.5 inches in width and a half-inch in length. Seating four, the compact sedan feels more open than the Civic and offers better visibility than previous years. Rear passengers get 36 inches of legroom, compared to 41 inches up front, and test drives praise the seat comfort in both rows. Though tall adults might feel a bit cramped in the back, headroom remains ample for a compact, averaging 38 inches. Rear seats split-fold 60/40 onto a 12.3-cubic-foot trunk, about average for this class.

The '09 Corolla comes in five trims. The cheapest and least equipped, the Standard offers a CD/MP3 player, manual windows and locks, intermittent wipers, and tilt and telescopic steering. The LE adds power windows and locks, while the XLE includes remote entry and wood interior trim. As the base sports trim, the S features sport seats, foglights, front and rear chin spoilers, rocker panels, and a leather steering wheel, but oddly goes without power windows and locks.

Joining the lineup this year, the XRS trim expands on the sport theme of the S by adding a more powerful engine, leather upholstery, a rear deck spoiler, larger 17-inch wheels, more chrome trim, and standard cruise, traction, and stability control. Many of the standard features on the higher-end trims are available as options. Other options include a sunroof, Bluetooth, satellite radio, heated seats, a JBL sound system, and a navigation system. These last two cannot be bundled together, however.

Reviewers and owners report satisfactory cabin layout and ergonomics, with simple and easy-to-read dials and knobs. The standard tilt and telescopic steering on all trims improves driver comfort, but some owners desired an optional power driver's seat. The refreshed interior sports a more refined and upscale look, again mimicking the Camry, but it does garner a few complaints about the use of cheap plastic materials on the dash and doors. Some owners found it disappointing, but not unexpected (or deal-killing) in an economy car. Several owners complained about the awkward placement of the clock, apart from the radio and closer to the front passenger. 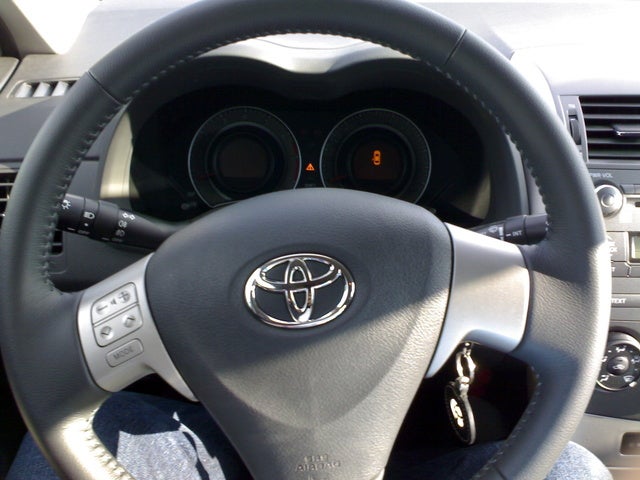 A strong safety record remains one of the primary reasons first-time buyers and long-time owners gravitate toward Toyota in general and the Corolla in particular. Not yet rated in crash tests, the '09 Corolla should only improve on its four- and five-star scores from previous years, thanks to the addition of standard ABS brake for all trims and optional stability and traction control. Standard across the lineup are dual front-side, side impact, and side curtain airbags for both rows, with active head restraints that feature improved whiplash protection. A tire monitor and daytime running lights are also standard, with the S trim adding foglights and the XRS adding the new traction and stability control. 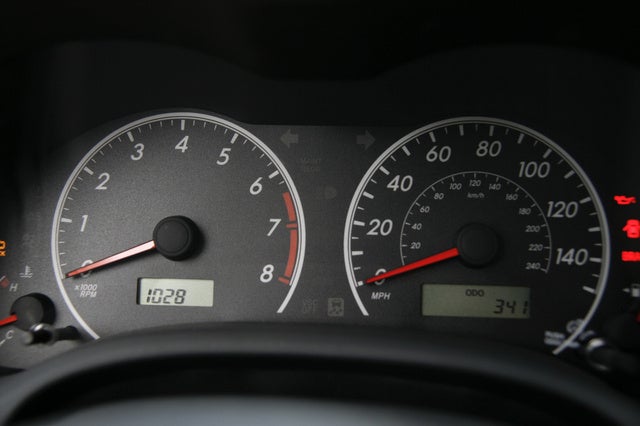 Very few Toyota Corolla owners wind up disappointed with their purchase, and the '09 Corolla is no different. The biggest highlight remains its superior fuel economy, about as good as you can get without moving up to the hybrid Prius, and at a much more affordable price. Owners find the '09 Corolla a great value overall, with a spacious interior, the looks and feel of the more expensive Camry, reliable safety features, and a quiet and comfortable ride. Aside from a few comments about bland styling, plastic materials, and lack of driver feedback, the Corolla fills its role well as a solid and dependable economy compact that continues to appeal to a wide demographic.

CarGurus owners appreciate the extra power in the two new engines, with some wishing for a bit more to accommodate the larger dimensions and slightly heavier weight of the Corolla over last year. Any negatives get quickly overshadowed by its 27/35 mpg ratings, however, which seem to have a major impact on attracting new buyers and retaining current ones.

What's your take on the 2009 Toyota Corolla?

Have you driven a 2009 Toyota Corolla?
Rank This Car

How Long Does Processing Take?

I privately listed my car and it still says "processing." What does that mean and how long?

I have a 2009 Toyota Corolla with approx, 280,000 Kms (mostly highway), car has always had it's regular oil changes and maintenance. Lately, at low speed and take off from stop, the car has been ve...

What Fuse On A Toyota Corolla That Makes The Windows. Power Steering, And L...

My husband was changing the alternator on my Toyota on my car and still connected to the battery and it touch grounded metal to the live line. The problem I am having now is that the power steering...

Replaced alternator and water pump. The car will start but the ABS and power steering lights come on. I can’t take it out of park and I get no power in the interior (no radio, locks, windows, ac, e...

On my 2009 Toyota Corolla the oil filter cap is extremely difficult to remove. The mechanics keep over-tightening. Does anyone have a suggestion on how to remove it so I can do the oil change at home...