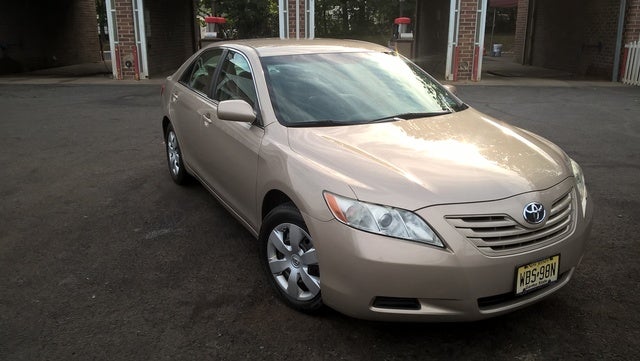 The Toyota Camry can best be described as a competent, dependable family car that offers a smooth ride and a comfortable interior, as well as good overall build quality, although some reports indicate that the Camry's quality has suffered slightly over the past few years.

The Toyota Camry's clean exterior styling fails to excite, and the standard four-cylinder powerplant provides only adequate acceleration, although four-cylinder trims with the manual transmission provide a bit more pop.

The Toyota Camry's nearly iconic status as a reliable, high-quality midsize sedan won't be shaken by the 2009 version, which carries over from the previous year with no major changes. While the four-cylinder trims provide only adequate acceleration, the V6 trims get good marks from reviewers, and the SE trim delivers a sportier Camry enthusiasts will appreciate. Overall, the Camry provides exactly what drivers expect from of a midsize sedan - a reliable daily driver that will rarely let them down, and often will satisfy thanks to its comfort and quality.

America's best-selling midsize car receives only one minor change in nomenclature for 2009. Toyota renamed the Camry's entry-level trim, the CE, and will now simply call it the Camry. It joins the LE, SE, and XLE trim, as well as a Hybrid Camry, all of which carry over from the previous year unchanged.

Now in the third year of an extensive redesign, which took place in the 2007 model year, the Toyota Camry continues to receive high marks from drivers and reviewers for its ride and build quality. The Camry offers neither the most power in its class nor the most exciting exterior design, but most agree it does deliver an overall consistency of quality, performance, and comfort that many drivers find reassuring. The Camry also gets good marks for its economy, safety features, and ease of handling, and retains its value well.

All Camry trims are four-door, front-wheel-drive sedans. The standard four-cylinder powerplant delivers good fuel economy, managing as much as 31 mpg on the highway. Drivers who require more power can opt for a V6 engine, available on the LE, SE, and XLE trims only. The Hybrid comes equipped with the four-cylinder gas engine as well as an electric motor.

Although generally well-regarded throughout its 25-year history for its quality, the Camry received mixed marks in 2008 from Consumer Reports for its V6 trims, which continue into '09 unchanged. However, J.D. Power gives the '09 Camry high marks for Predicted Reliability, based on historical and dependability data. Overall, drivers should be aware that the Camry's high level of quality has come into question over the past couple of years. 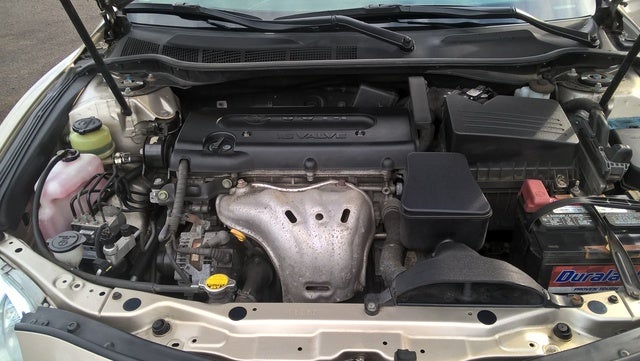 For the LE, SE, and XLE V6 trims, a 3.5-liter, double-overhead-cam V6 engine generates 268 hp and 248 lb-ft at 4,700 rpm. The V6 links to a six-speed electronically controlled automatic transmission, which is the only transmission available on V6 trims. The automatic transmission features a sequential mode that enables drivers to shift manually when desired. Fuel economy suffers slightly on the V6, which achieves 19/28.

The Hybrid, with its combined gas engine and electric motor, which Toyota calls the Hybrid Synergy Drive, produces 187 hp overall and achieves 33/34 mpg. The Hybrid also comes equipped with an ECO button, which drivers can use to limit energy consumption by the car's climate control system and improve fuel economy even more.

The Camry has long been appreciated for its smooth, quiet ride, and the 2009 version continues that tradition. Some drivers and reviewers characterize the Camry's ride as soft and unexciting, and cite limited road feel. However, the Camry's ride appeals to most drivers, especially for daily commutes. Responsive and accurate steering and handling add to the Camry's overall appeal.

All Camrys feature a four-wheel independent suspension and four-wheel disc brakes and ride on 16-inch wheels, with the exception of the SE trim, which rides on six-spoke, 17-inch wheels. The SE also features a tweaked suspension, with underbody stabilizing braces, as well as firmer springs and shock absorbers, which result in a sportier ride. In addition, the SE sits 0.4 inches lower to the ground than the other Camry trims.

The four-cylinder engine provides adequate power for most daily driving activities, although reviewers recommend the manual transmission for drivers who prefer a more responsive experience. In addition, Camry trims equipped with the four-cylinder can sometimes struggle when heavily loaded, according to some reviewers. The V6, however, generally gets good marks for its power and acceleration in most driving situations.

The Camry's interior, like its other features, meets all expectations but rarely excels. Most will find the interior well-designed and comfortable, with numerous storage spaces and plenty of standard features, including power windows and door locks, air conditioning with micro dust and pollen filter, cruise control, and a tilt/telescoping steering wheel. The driver's seat pushes back far enough to accommodate drivers with long legs, and most will find adequate headroom in the Camry, as well as plenty of legroom in the backseat.

All trims except the entry-level Camry come equipped with remote keyless entry and a power-adjustable driver's seat, while the XLE comes with such standard features as a power tilt/slide power moonroof, a leather-wrapped steering wheel, a multifunction display, wood-grain-style interior trim, a power-adjustable passenger seat, dual-zone climate control, and a special seat fabric called Fraichir, which Toyota notes is designed to be gentle on the skin. The SE comes with Blue Optitron sport meters as standard equipment.

For entertainment, the entry-level Camry, SE, and LE trims come equipped with a six-speaker, 160-watt digital AM/FM audio system with a CD player and an MP3 input jack. For the XLE, Toyota upgrades the audio system to an eight-speaker, AM/FM unit with a six-disc in-dash CD changer, satellite radio, and Bluetooth, which enables hand's-free phone capability. Toyota offers a voice-activated DVD navigation system as an option.

Standard features for the Hybrid include Optitron gauges and a multi-information display that provides details about the hybrid system, as well as keyless entry, cruise control, power windows and door locks, and a dual-zone climate control with an electric compressor.

While the Camry offers adequate cargo space at 14.5 cubic feet, it lacks the functionality and expansiveness of some competitors' vehicles, according to reviewers.

The Camry received five stars (the highest score possible) in front and side impact testing conducted by the National Highway Traffic Safety Administration, due to a body structure designed to absorb impact forces during a collision and resist intrusion into the passenger compartment. In addition, the seat frames will help absorb impact forces during a side collision. The Camry also received a four-star rollover rating.

Standard safety features for all trims include dual-stage advanced front airbags, side curtain airbags, a driver's knee airbag, and antilock brakes with brake assist and electronic brakeforce distribution. Toyota offers vehicle stability control with traction control as an option on all trims.

The Toyota Camry continues to receive very high marks from CarGurus drivers. While some find its design slightly dull, others come to its defense, comparing the Camry to more sophisticated cars from Lexus, although some note the Camry doesn't quite live up to the standards set by German sedans. Generally, CarGurus drivers like the Camry's smooth ride, roominess, comfort, and build quality. Some find fault with the car's acceleration, while other drivers have visibility problems out the back. But overall the Camry rates highly with CarGurus drivers.

Jack Camry or better yet the BMW 328i

Users ranked 2009 Toyota Camry against other cars which they drove/owned. Each ranking was based on 9 categories. Here is the summary of top rankings.

Have you driven a 2009 Toyota Camry?
Rank This Car

How Can I Get The Carfax Report?

how can i access the free CarFax report on a car we purchased through the site?

11 views with 2 answers (last answer about a week ago)

CarGuruPay Isn't Working For Me

Should you replace the fuel filter

Is The Fuel Filter Located In The Fuel Pump Assembly?

I want to replace the fuel pump in my 09 Toyota Camry SE but I wanted to know where the fuel filter is so I can replace that to.