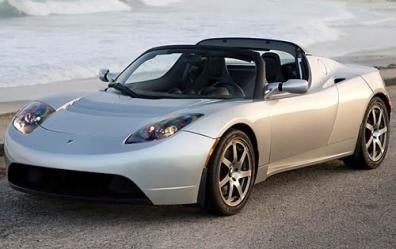 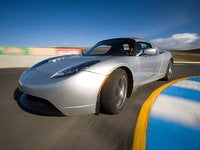 The Tesla Roadster finally gets rolling full-steam for 2009, with a ramped-up production cycle and a re-configured single-speed transmission that should eliminate shifting problems, but the Tesla's main claim to fame as a true electric supercar that rips down the road and never needs a pint of gasoline remains its greatest asset.

A price tag north of $100,000 makes the Tesla Roadster a car only for those who can afford its show-vehicle status, although a fairly sparse interior and some rumblings about weight distribution and handling also demonstrate that the Tesla was designed to appeal more to enthusiasts than eco-conscious drivers. 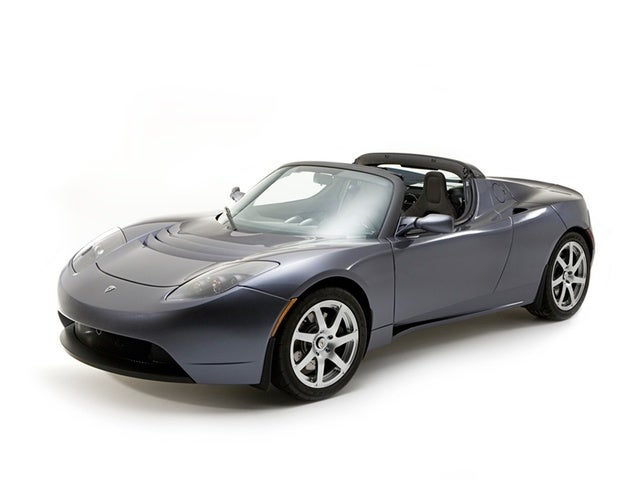 The trend-setting Tesla Roadster certainly demands all the attention it has received over the past couple of years, and the slightly revised 2009 version improves on the original, but limited production numbers and a high pricetag mean the Tesla won't enter the mainstream anytime soon, so we'll wait for the rumored lower-priced Tesla family car to see if an electric vehicle can gain traction in the mainstream marketplace.

The 2009 Tesla roadster impresses for two attention-grabbing reasons. First, it jumps out from 0 to 60 in only 3.9 seconds, which puts it on par with some of the fastest-accelerating cars in the world, including cars from Ferrari, Lamborghini, and Porsche. It achieves that impressive acceleration with an engine that delivers 100 percent torque 100 percent of the time, generating a constant rush of power. Second, the Tesla's engine runs solely on electricity, so you'll never have to stop at a gas station. That fact alone makes the Tesla a true car of the future, though it's available today.

The Tesla grabbed headlines a couple of years ago when it was introduced to the public at the San Francisco International Auto Show, and it went on sale in 2008 with very limited availability and a high pricetag. After taking several months to produce just a handful of cars, Tesla ramped up production in 2008 to produce a total of 650 units, which sold for a base price of $98,000 and came fully loaded for $100,000. Tesla plans to more than double that production run for 2009, to 1,500 units, and has increased the car's base price to $109,000.

As in previous years, the Lotus plant in the United Kingdom assembles most of the Tesla, with final assembly taking place at the Tesla factory in Menlo Park, California. Lotus provided some design and engineering help, but the Tesla was primarily designed and funded by its American-based principals. Although the Tesla shares a few common elements with the Lotus Elise, including its dashboard, front airbags, windshield, and some of the suspension, about 90 percent of the Tesla's design and components are original.

Like many of the world's great sports cars, the Tesla sits low to the ground and seats two passengers. Its carbon-fiber body displays sleek aerodynamic lines. Front air ducts double as energy-absorbing zones, while the shoulder intake ducts incorporate touchpads, which are used to open the doors in place of traditional door handles. LED taillights are located in the oval-shaped rear end, which add to the car's sporty appearance. The open-top, rear-wheel-drive Tesla comes with a double-insulated soft top as standard equipment. Drivers also can opt for an available color-matched carbon-fiber hard top.

The Tesla's powerplant consists of an air-cooled, 375-volt, three-phase electric motor, which produces 248 peak horsepower and 276 lb-ft of torque. The engine links to a lithium-ion battery pack made up of 6,831 individual batteries in an aluminum enclosure. To prevent overheating, a fluid consisting of a 50/50 mix of water and glycol cools the batteries. The Tesla will run between 170 and 256 miles on a single charge, depending on how hard the car is driven, and averages about 227 miles on a charge, according to EPA testing. Drivers can fully charge the Tesla's battery in as little as 3.5 hours using a High Power Connector, which comes as standard equipment. (The High Power Connector must be installed in the driver's garage by a qualified electrician.) Drivers can partially charge the battery in even less time.

The automaker also offers an optional Mobile Connector, which drivers can use any to charge the Roadster by connecting it to any standard 110-volt or 220-volt electrical outlet. Drivers can charge the Tesla for as little as 2 cents a mile, using off-peak charging rates, according to the automaker.

The battery, which Tesla calls an Energy Storage System, or ESS, has a life expectancy of 100,000 miles or five years, after which it must be replaced. In addition, the battery will degrade over time, so after five years it will operate at about 70 percent efficiency, according to Tesla. Drivers can expect to pay about $20,000 to replace the battery pack, though that cost should come down in the years ahead.

Drivers also should be aware that while the Tesla Roadster operates at peak performance at speeds up to about 70 miles per hour, its acceleration and responsiveness tend to degrade at higher speeds. The Tesla has a top speed of 125 mph (electronically limited), but it can maintain that speed for only a few minutes, according to reviewers, who note that after that period of time the Tesla settles into a cruising speed of about 105 mph. 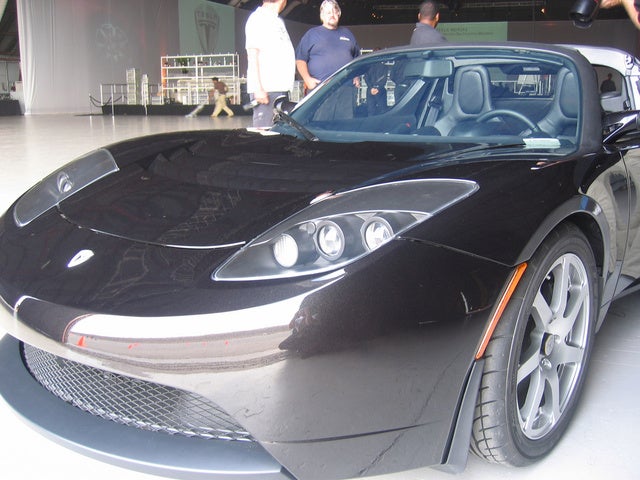 The Tesla rides on a lightweight, rigid, resin-bonded aluminum monoquoque chassis produced by Lotus, but the placement of its 992-pound battery in the Tesla's midsection results in a weight distribution that differs from the Elise's. That battery pack and weight factor affected other elements of the car's design, including the body panels and suspension.

Although the Tesla handles differently than supercars like the Lotus Elise, drivers and reviewers give good marks to the Tesla's driving dynamics, noting its taut handling and responsive steering.

The Tesla roadster comes equipped with independent front and rear suspensions. Traction control comes standard, but the Tesla does not include stability control. Up front, the Tesla rolls on 16-inch seven-spoke wheels, while larger 17-inch wheels have been added at the back. Regenerative brakes recover energy when the vehicle slows and use that energy to recharge the battery, which increases the time between charges.

The Tesla's electric engine results in quiet operation, which takes some getting used to, especially for those used to the throaty exhaust notes of other supercars. In addition, with the engine running almost silently, road noise becomes pronounced, according to drivers and reviewers. 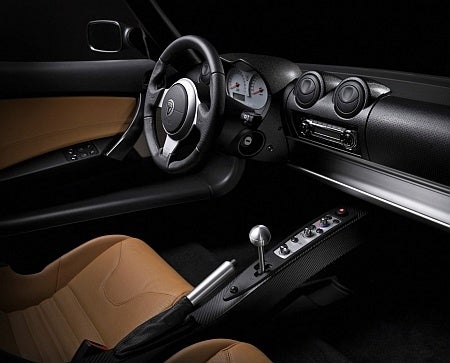 Like many upscale sports cars, the Tesla Roadster has a stripped-down cabin, yet it comes with enough features to justify its pricetag. Both occupants can enjoy heated sport seats with inflatable lumbar support, while the driver can put the car through its paces using the three-spoke, leather-wrapped MOMO sport steering wheel. Air-conditioning, cruise control, and power windows and door locks all come standard. Other features include a touchscreen vehicle information display, an electric air conditioner and heater, a Homelink universal transmitter, and an audio system with single-disc CD player, iPod interface, and MP3 playback.

Drivers and reviewers note that, overall, the interior bears a resemblance to the Lotus Elise's cabin, with a similar dashboard and instrument cluster. Although the Tesla stretches 3 inches longer than the Elise, its width remains the same, resulting in a compact cabin with a sports-car feel. The seats place the driver and passenger low in the car and close to the road, and drivers note the seats are adjustable only forward and backward - there's no option to adjust the angle of the seats or seatback, which some might find uncomfortable. The leather seats have light padding, which adds to their sport feel or can cause discomfort, depending on your opinion. In addition, the sport steering wheel might feel small to some, but it adds to the overall sporty driving experience.

The Tesla's battery and 4-foot-wide Power Electronics Module, which controls the motor torque, charging, and regenerative braking, reside behind the seats and take up some of the cargo area, which reduces trunk space. But reviewers note that the Tesla can still carry several grocery bags or enough baggage for a weekend getaway. 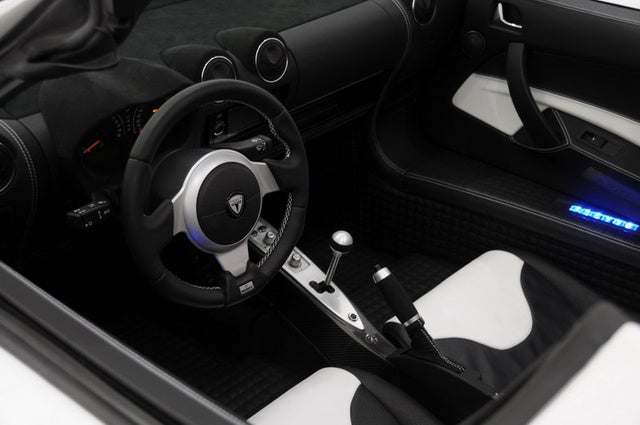 In addition to antilock brakes and traction control, safety features include front and rear crumple zones, driver and passenger airbags, and side-impact door beams, as well as a vehicle theft deterrent and motor immobilizer system.

Tesla has also taken steps to ensure driver safety when charging the vehicle. The plug of the High Power Connector unit becomes live only when it has been connected to the vehicle and activated by the car's systems. In addition, the charging system automatically shuts down if it detects any kind of fault, smoke, or strain on the cable.

The battery pack itself also presented a safety challenge, as the lithium-ion batteries, which are the same type used in laptop computers, can overheat and damage the vehicle. The automaker created a proprietary cooling system to keep the battery from overheating and conducted extensive testing to ensure the safety of the system. In addition, a Battery Safety Monitor, located inside the battery pack, automatically shuts down the battery and disconnects it from the vehicle if it detects any type of problem. Tesla also labeled all high-voltage components to alert mechanics and emergency responders to the car's electrical systems. 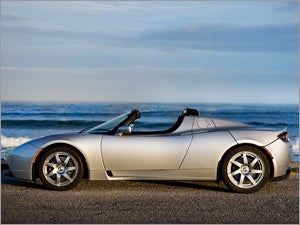 The Tesla's steep $109,000 sticker price remains the biggest objection to the car from typical drivers. Some note that an electric car priced in the $30,000 range could make a real impact on the environment. That said, most reviewers and drivers find the Tesla an impressive vehicle, due primarily to its stunning acceleration and eye-catching design. The fact that it requires no gas to operate makes it an even more intriguing vehicle in an era of high gas prices, and many consider the Tesla an indication of what can be achieved in today's automotive industry.

Some drivers and reviewers find fault with the Tesla's weight distribution (due to the location of the battery), which can affect handling. However, most like the Tesla's responsive steering and nimble handling in curves. Some find the interior a bit stark and a little too sports-car like, and for some the Tesla's silent running takes some getting used to, but most agree that the Tesla demonstrates that an electric car can compete with the world's great sports cars.

What's your take on the 2009 Tesla Roadster?

Have you driven a 2009 Tesla Roadster?
Rank This Car

What Do You Think Of The 2009 Tesla Roadster?