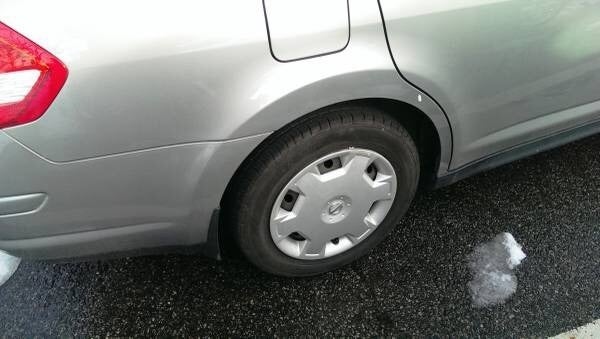 Drivers wishing to make a small carbon footprint can do so affordably with the 2009 Nissan Versa, whose city-friendly maneuverability, fuel efficiency, and deceptively roomy interior make it a great commuter car.

Fit and finish could be improved in the '09 Versa to reduce the amount of interior rattling, and Nissan should go ahead and make ABS brakes standard.

The 2009 Versa makes an ideal choice for city commuters looking for a practical and affordable car that moves easily around town and saves money at the gas pump. The Versa also shatters preconceptions about subcompacts by offering a roomy interior that actually fits four passengers. Those preferring reliability and affordability over thrilling driving dynamics and fast off-the-line power should do just fine with the Versa.

The hatch is back and better than ever. With more people moving into cities and gas prices staying high, small, affordable, and fuel-efficient cars seem to be at a premium these days. The 2009 Nissan Versa, available in both sedan and hatchback forms, gives drivers a budget subcompact without sacrificing interior space or comfort. Its tall profile creates an incredibly spacious cabin, and the hatchback adds extra cargo versatility. Its small dimensions make parallel parking and darting around the city an easy prospect.

The 2009 Versa returns unchanged. Both sedan and hatch come in base S and sportier SL trims, each carrying the same 1.8-liter four-cylinder engine. Both ride on 15-inch wheels and feature a CD player and air conditioning, but the SL represents the best value for the money with the kind of standard equipment taken for granted in most cars these days. Only the SL can be outfitted with the Sport Package, which dresses up the exterior with side sills, a rear spoiler, foglights, and lower body cladding. The '09 Versa comfortably seats four tall people and the hatch version leads its segment for cargo capacity.

The '09 Versa won't satisfy driving enthusiasts, but it's not meant to. For commuters or first-time buyers living on a budget, the Versa represents a fuel-efficient, affordable, and versatile city car. But it goes beyond the traditional concept of an econobox, by offering a comfortable cabin, a strong list of standard features, and utilitarian space. 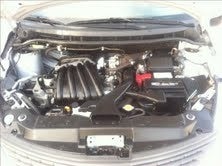 The '09 Versa delivers more power than both the Fit and Yaris, thanks to a slightly bigger engine. Its 16-valve, 1.8-liter DOHC inline-four engine puts out 122 hp and 127 lb-ft of torque and, in case anyone is really measuring, hits 0-60 in 9.5 seconds. That doesn't make it fast, but the engine benefits from the Versa's small size and light weight, resulting in a fairly zippy ride. Both the S sedan and hatch match the engine to either a 6-speed manual or 4-speed automatic with overdrive. The SL sedan only features the automatic, while the SL hatch gets the much preferred CVT, continuously variable transmission. Fuel economy numbers, which earn lots of praise from critics and owners, hover around 26/31 mpg.

Drivers will find plenty of power for commuting and getting around city streets, but off-the-line acceleration and highway passing performance feel labored and slow, as they do in many subcompacts. Most reviewers and owners recommend the CVT over the other transmissions. Its smooth and quiet transitions outperform the automatic's delayed downshifts and the manual's rubbery feel.

A soft suspension delivers a predictably floaty ride in the '09 Versa, accompanied by light steering and the expected understeer found in most economy compacts. While it lacks much in the way of driver feedback, the Versa serves its commuter purpose with ease – getting passengers from point A to point B with confidence and reliability. Its small dimensions, however, make good use of what would otherwise be considered an underpowered engine, as well as giving it a tight turning radius and nimble maneuverability for navigating city traffic and cozy parking spots.

To create its spacious interior, the '09 Versa sits taller than many hatchbacks in its class. When combined with the soft suspension, it creates bad cornering capabilities, although its long wheelbase (102 inches) improves stability over winding roads. Drivers do notice a tendency for wind wander on the highways. Most owners enjoy the handling of the Versa, finding it precise and tight enough for their everyday needs, but critics agree that sportier dynamics can be found in the Honda Fit.

The 2009 Nissan Versa boasts the largest passenger volume in its class. Owners agree that four adults over 6 feet fit easily and comfortably into both the front and back seats, with front and rear legroom measuring 41 and 38 inches respectively. A tall roofline provides 38-40 inches of headroom, so passengers never feel crammed in, even in trims equipped with the sunroof. Only its narrow width might limit some elbow room.

Soft, cushiony seats offer a pleasant ride, although their lack of support may get annoying on longer trips. The simple and intuitive dash features backlit controls and gauges that lie within easy reach and can be easily read. All trims feature a tilt steering wheel, but lack the telescopic function for maximum driver comfort. Critics appreciate the soft-touch materials on the doors and consoles, but the plastics used seem to detract from an otherwise quality interior. Both owners and reviewers notice loud rattling coming from the dash and center console. A major oversight comes in the design of the armrest. Missing altogether in the base S, the awkward armrest in the SL is neither long enough nor tall enough for the driver to rest an arm comfortably.

Rear seats in both the hatch and sedan split-fold 60/40, but unlike the Fit, they do not fold flat. Many drivers find this bothersome when trying to load longer pieces of cargo. Trunk capacity in the sedan exceeds expectations for a subcompact, measuring 13.8 cubic feet, while the more versatile hatch starts out at 17.8 cubic feet and expands to 50. A cargo cover comes standard in the hatch. Owners are amazed at how much the deceptively tiny Versa holds.

To keep the price down, the base S sedan and hatch offer few standard features beyond air-conditioning, intermittent wipers, and a 4-speaker sound system with CD player. For not much more money, the better value lies in the SL, which adds power accessories, cruise control, the center console and armrest, and a 6-CD changer with MP3 input jack. Most of these features are available as options for the S, but the SL has a longer list of add-ons, such as a sunroof, Bluetooth, satellite radio, and the much appreciated Intelligent Key.

The 2009 Versa earns four stars in all crash test categories and receives a Good rating from the Insurance Institute. Its most glaring omission is the lack of standard ABS brakes to supplement the front disc and rear drums. ABS comes as a low-cost option, which most owners will probably choose, so perhaps Nissan will wake up and just include it in future versions. Other standard features include dual front-side and side curtain airbags for both rows, active front head restraints, a passenger airbag cutoff sensor, and a tire monitor.

Owners of the '09 Versa marvel at its expansive interior, with head and legroom capable of holding 6-footers comfortably and a cargo space that holds more than expected. This spaciousness gets mentioned in nearly every review. Other highlights include its tight turning radius and maneuverability, the CVT's smoothness, high mileage ratings, and surprisingly peppy ride. Owners also find the seats comfortable, even on long trips, and the cabin quiet. The Intelligent Key and Bluetooth options earn high marks from reviewers, who say these options cost less than in the Fit.

The Versa does have a few downsides, according to owners. These include a center console that rattles annoyingly, low-quality interior materials, the lack of fold-flat rear seats, a tendency to be pushed around on windy days, and a low ground clearance that easily bottoms out. But by far the most consistent and persistent complaint focuses on the armrest issue. Drivers hate that the base S lacks an armrest and center console altogether. However, owners of the SL, which does come with an armrest, find it too short and too low to provide any kind of comfort.

CarGurus owners have yet to comment on the 2009 Versa, but the identical 2008 earns similar praise and criticism. Highlights include the fuel economy, CVT performance, and passenger and cargo capacity. Suggested improvements point to the need for standard ABS and a more powerful engine.

Users ranked 2009 Nissan Versa against other cars which they drove/owned. Each ranking was based on 9 categories. Here is the summary of top rankings.

Have you driven a 2009 Nissan Versa?
Rank This Car

Push On Gas Nothing Happens

09 Nissan Versa had a motor put in drove it for an hour or two. Now I push on the gas and nothing happens at all! It will start but I push on gas and just stays idling. What could this be? Pleas...

My Car Trunck Pops Open By It Self?

the truncks opens by it self.

when i stop at a red light my versa engine sometimes has a tremor .it also does it sometimes while i am driving it runs great over than that .

I drive a 2009 Nissan Versa. Today, I was stopped at a red light. My car froze up, and I could not accelerate when the light turned green, even after putting it in park and then back to drive. 4 lig...