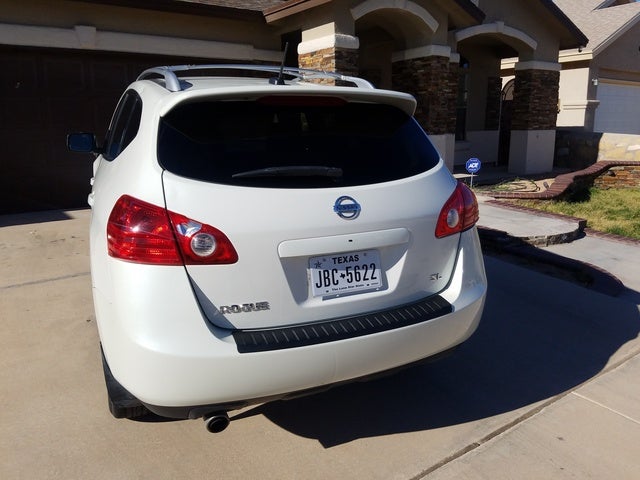 Its energetic powertrain, crisp and slightly sporty handling, and superior fuel economy for its class will delight performance-oriented drivers of the '09 Nissan Rogue, while top-notch crash test ratings provide reassurance to parents looking to keep their families safe and secure.

The '09 Rogue's small and narrow rear bench and limited cargo room make it less family-friendly than most other compact SUVs in its class.

With its sleek lines, sophisticated styling, and small second row and trunk, the '09 Rogue clearly sets its sights on younger drivers rather than families with kids who spill Cheerios all over the back seat. That said, it does a good job of combining performance-oriented handling with the functionality and storage options of a utilitarian SUV. Money saved by virtue of its good fuel economy and relatively affordable pricetag, however, can quickly be lost on pricey and unnecessarily bundled option packages.

Nissan entered the compact SUV field somewhat late with the Rogue, but distinguishes its “mini-Murano” from the pack with non-boxy, athletic lines, taut handling, and a spirited and powerful ride. Nissan designed its Rogue with a younger driver in mind, one that doesn't want to give up style for functionality. The 2009 Rogue returns with some minor additions to its features and option packages.

Available in both front- and all-wheel drive, the '09 Rogue shares its C platform with the Nissan Sentra, and as a result exhibits a car-like feel behind the wheel. It seats four to five passengers in two rows and comes in S and SL trims. Added to the standard equipment list for the SL are a trip computer and temperature display (previously optional), automatic speed-sensing locks, and a folding front passenger seat to accommodate long objects. The Premium Package now features Bluetooth and Intelligent Key remote start, while the Leather Package (leather upholstery, heated seats, and power driver's seat) becomes available for both SL - FWD and AWD - trims. A new dual-level center console provides tiered storage up front.

The '09 Rogue joins a crowded pack on the market. In this era of higher gas prices, compact SUVs and crossovers have gained popularity over their larger siblings, thanks to a combination of utility and better fuel economy. The Rogue attempts to stand out with its more youthful, muscular styling and sportier driving dynamics. Those looking for a better use of interior space and family functionality might be better off with the Honda CR-V or Toyota RAV4.

One engine inhabits both the S and SL trims. The 16-valve, 2.5-liter DOHC inline four puts out 170 hp and 175 lb-ft of torque at 4,400 RPM. The only available transmission is an Xtronic CVT. The Rogue's light weight takes full advantage of its powertrain, delivering quick off-the-line acceleration and 0-60 times of 9.2 seconds. Though unlikely to be used for such a purpose, the '09 Rogue can tow up to 1,000 pounds. Critics and owners find the four-cylinder performs well around town and on the highway, but does have trouble accelerating uphill. A V6 would be a welcome addition to some owners.

The CVT provides for seamless gear transitions with its infinite set of gears. The sensation takes some getting used to at first, but reviewers find it quick and responsive. The CVT also features an adaptive shift control that adjusts the transitions according to road and driving conditions. However, some critics find that the CVT is somewhat compromised by the four-cylinder, giving it a rubber band-like feel when shifting. Drivers can operate it with a traditional shifter, although paddle shifters on the steering wheel can be added as an option.

CVT technology aims to improve fuel economy as well, and the powertrain in the '09 Rogue offers class-leading numbers of 22/27 mpg. These represent impressive numbers for an SUV, even a compact one.

Sharing a platform with the Sentra gives the '09 Rogue car-like handling, which appeals to families who want the space and high drive height, but not the unwieldy maneuverability of a truck-based SUV. The Rogue rides on an independent Macpherson strut front and multilink rear suspension, suitably firm for a stable ride, but not so harsh as to impinge on passenger comfort.

Along with a strong powertrain and confident acceleration, the Rogue exhibits very responsive brakes with short stopping distances. Its electric power steering actually offers a tight and precise driving experience for an SUV. The use of high-strength steel contributes to the lighter weight of the '09 Rogue, which improves performance and lends a spirited air of fun to the driving experience. Reviewers and owners alike prefer the extra touch of sportiness in the Rogue. Although the high-strength steel is intended to improve solidity, the Rogue actually feels less solid than others in its class, according to one test driver, and its light weight makes it prone to wind wander on the highway.

The Rogue's AWD system performs well, but lacks the low-range gearing required for any serious off-roading. It does feature yaw control, which works in conjunction with the stability and traction control to provide more stable and firm footing.

Cabin noise gets mixed reviews, with one reviewer praising its quiet ride, but another noticing a large amount of wind and road noise. The larger 17-inch wheels on the SL (S trims get 16-inch wheels) contribute to the noise factor and also increase the impact of bumps and dips in the road. A high ride height offers good front and side visibility to drivers, but blind spots caused by the rear C pillars can be problematic.

Nissan claims the 2009 Rogue seats five in two rows, but the narrow interior dimensions and sloping roofline mean only two passengers can fit comfortably in the back seat. At 182.9 inches long with a wheelbase measuring nearly 106 inches, the 2009 Nissan Rogue offers longer dimensions than its competitors, but the extra inches get allocated to passenger comfort rather than the cargo bay, which falls behind the RAV4's in terms of storage capacity.

Continuing its focus on the driver rather than families, the Rogue devotes much of its cabin space to the front row, with a comfortable 42 inches of leg space (compared to only 35.8 in the back, nearly 3 inches less than in the RAV4) and wide-opening front doors that provide good access. These same doors are absent for rear passengers, and one test drive from 2008 found entry and exit to the back row challenging. Headroom also favors the front row, with space to accommodate 6-footers, even when equipped with a sunroof. Unlike many new crossovers and compact SUVs, the Rogue's rear seats do not recline.

Bolstered front seats provide extra support when taking the Rogue out on winding roads, and most owners find them comfortable for long trips. Its high drive height gives drivers good visibility, and the driver's seat can be manually raised up to 2 inches. Power front seats are optional. Both trims offer tilt steering, but a telescopic function is not available. Large controls and dials sit within easy reach, although the front cupholders sit low to the ground. Red-orange backlighting and silver accents on the gauges give a high-end, yet sporty look to the interior, but one test driver says the lighting makes the controls difficult to read. The overall quality of the materials feels refined.

Rear seats split-fold 60/40 and fold nearly flat, expanding the 29-cubic-foot trunk to 58. The optional fold-flat front passenger seat in the SL offers room to fit 8.5-foot-long objects. The cargo bay itself features tiedowns, a cargo cover, and a plastic tray, and the SL can be outfitted with a pop-up storage compartment with handy nets and partitions. A removable plastic floor is washable. The rear window does not open separately from the liftgate. The SL trim also features roof rails which can be equipped with cross bars. Inside the cabin, drivers will find the requisite door pockets and a new two-tier center console. Owners and critics love the large glovebox, which measures 0.5 cubic feet, as well as a pull-down hook located on the back of the front passenger seat, useful for holding small bags or a purse.

Both trims offer a long list of standard features, which most drivers find to be a good value for the money. The base S includes power windows, locks, and mirrors, remote entry, cruise control, and a 4-speaker sound system with CD player and MP3 jack. The SL does not expand on the standard convenience features, but does add larger 17-inch wheels and a roof rack. Several option packages offer heated leather seats, a power sunroof, a 6-CD changer and Bose sound system, remote start, Bluetooth, and wheel-mounted audio controls and paddle shifters.

The Insurance Institute named the 2008 Nissan Rogue one of its Top Safety Picks, and with no changes to its safety equipment, the '09 Rogue should follow suit. The NHTSA gives the SUV five stars in all impact tests except rollovers, where it earns a more than respectable four. Contributing to this score are the dual-stage front-side airbags and side curtain airbags for both rows, 4-wheel ABS brakes with electronic brakeforce distribution, standard traction and stability control, a tire monitor, rollover sensors, and active head restraints. The AWD system provides extra traction in slippery conditions. Drivers consistently rate the strong safety profile as a factor in their decision to buy the '09 Rogue.

Strong fuel economy impresses owners of the '09 Rogue, with some reporting highway numbers in the high 20s. Its smooth ride and high-end interior offer sedan-like comfort, while its instant acceleration and agile handling appeal to the driving enthusiast living inside every soccer mom. One owner finds the Rogue sportier and roomier than the CR-V, and all appreciate its unique styling that sets it apart from the rest of the field. Fun to drive, but also strong on safety, the '09 Rogue earns few negative comments. Consensus opinion focuses on the huge blind spots in the rear of the SUV, making it hard to parallel park. A small trunk and intrusive noise when accelerating hard also earn low marks.

No CarGurus drivers have given their opinions of the '09 Rogue, but owners of the 2008 version give multiple nods to its fuel efficiency, smooth handling, and affordable pricetag. With a long list of standard features, the Rogue represents a good value for the money, according to several owners. The comfortable interior also earns praise. The biggest complaint for CarGurus owners centers on the lack of a navigation system, even as an option. Some would like more power and a manual transmission. A continuing complaint about Nissan vehicles in general is the annoying and pricey options bundling.

Users ranked 2009 Nissan Rogue against other cars which they drove/owned. Each ranking was based on 9 categories. Here is the summary of top rankings.

Have you driven a 2009 Nissan Rogue?
Rank This Car

I Have A Nissan Rogue And It Looses Power.

I went to Las Vegas last week and every time I hit a hill, I was doing about 75-80 the power would drop down to around 30 even if I had it floored....

I saw other questions regarding horns not working, but also on mine the radio station control on the steering wheel also not working.

My 2009 Nissan Rogue ac compressor isn’t turning on. I think it’s a power supply issue between the ac relay and the compressor. I’ve checked the fuses and they are all ok. I can’t seem to find where...

WHERE IS BRAKE LIGHT FUSE LOCATED ON 2009 ROGUE

170 views with 2 answers (last answer about a year ago)

Where Is The Fuse For The Horn