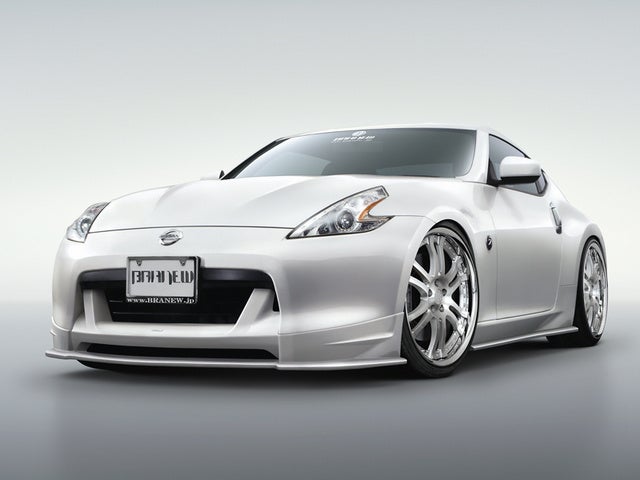 Nissan’s Z car has taken significant strides in power, handling, and aesthetics with its latest incarnation, the 2009 370Z, the most powerful Z yet and the replacement for the 350Z. The two-seat, rear-wheel-drive 370Z is available in two trims, Base and Touring, and starts at $29,930.

The 370 name corresponds to its engine displacement of 3.7 liters, a system that started with the first Z, the 1969 Datsun 240-Z, and obviously indicates a larger displacement than its immediate predecessor, the 350. This V6 produces 332 hp and 270 lb-ft of torque and can take you from 0-60 in 4.7 seconds, which is about two tenths of a second faster than the 350Z. There’s also a new intake system, Nissan’s Variable Valve Event and Lift, which increases the torque curve and fuel efficiency and reduces emissions. This fourth-generation Nissan VQ engine is the same one that’s in the Infiniti G37.

The performance upgrade continues with a wheelbase that's been shortened by 3.9 inches from the 350's, a width increase of 1.1 inches, a length decrease of 2.7 inches, and a lowering of 0.6 inches. All these adjustments add up to superior handling. The car is 33 pounds heavier, but could have been much more. Nearly 200 pounds of regulatory safety features were added, but thanks to lightweight materials (aluminum doors and hatch and a carbon-fiber composite driveshaft, for example) its overall weight didn’t balloon.

The 7-speed automatic transmission with steering-wheel-mounted paddle shifters is not your average slush-box auto transmission. But it’s the SynchroRev Match 6-speed manual that has people talking and represents a major upgrade from the 350. This new technology automatically moves the throttle to the ideal RPM during a downshift, smoothing transitions, making fast corners a breeze, and prompting some to call the 370 a sports car for beginners.

Perhaps the 370Z's biggest negative is the standard audio system, which won’t play MP3 CDs and has muddy sound. But the available suite of cabin technology (also seen in the Nissan Maxima) is excellent and features a Bose stereo system with 9.3GB Music Box hard drive, hard-drive based navigation system with real-time traffic advisories, and iPod and cell-phone integration. The cabin screams sports car with its low seats, bold controls and gauges, and rich details.

The lush curves of the 370 are pleasing to the eye. The new “fangs” on the front grill, large “fishhook” headlights and taillights and oversize chrome door handles may not appeal to all, but it’s hard to imagine anyone calling this an ugly vehicle. Considering its performance, price and looks all together, it seems clear Nissan has moved in the right direction with its Z.

Users ranked 2009 Nissan 370Z against other cars which they drove/owned. Each ranking was based on 9 categories. Here is the summary of top rankings.

How To Get Car Out Of 6th Gear

how long does it take to change the spark plugs in a Nissan 370z. My mechanic wants to charge for 2 hours. Is that reasonable?

7 speed automatic is not shifting as sharp as it normaly does 170,000 mileage

My 370z has stopped automatically shifting and when it reaches between 3,000 and 4,000 rpm it starts to miss and breakdown. It won't shift out in automatic shift mode but will in manual shift mode.