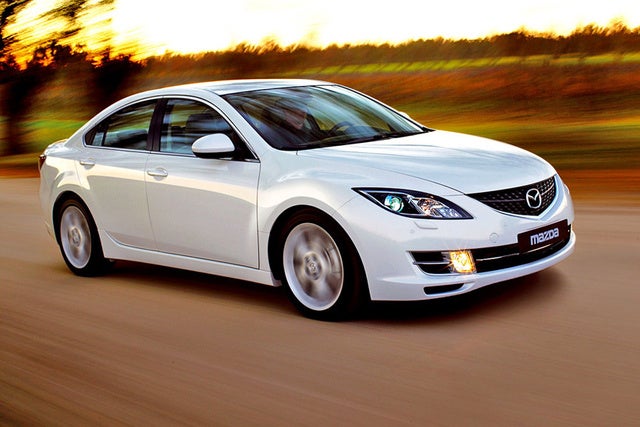 A family-sized sedan aimed at driving enthusiasts, the '09 Mazda6 combines decent power, stylish looks, and plenty of interior space with the performance and handling of sportier cars.

The '09 Mazda6 stills lags behind the Accord and Camry in fuel efficiency, particularly with the stronger V6 engine, and dropping the hatchback option may disappoint those wanting more cargo versatility. 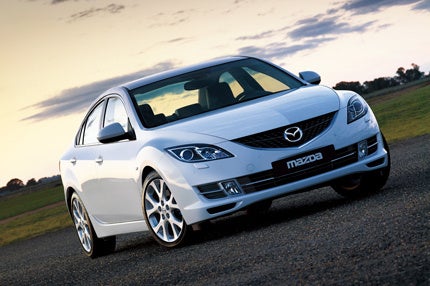 Just because you own a midsize sedan doesn't mean you can't have fun. The '09 Mazda6 delivers performance-oriented handling and power for a much lower price and better fuel efficiency than more upscale sport sedans, and it outdrives and outperforms most cars in its class. Adding the extra room and classing up the interior and exterior lends it family practicality without the suburban blandness associated with many family sedans.

The 2009 Mazda6 gets a brand new redesign, addressing previous complaints about its small size, lack of power, and undistinguished interior style. The new sedan returns with a flourish, dropping its hatchback counterpart in order to focus on upscale sedan comfort, confident highway passing power, and sporty driving dynamics.

The midsize, front-wheel drive 2009 Mazda6 gains nearly seven inches in length, 2.3 inches in width, and 4.5 inches in its wheelbase, giving it more passenger leg, head and shoulder room than both the Altima and Camry, and only slightly less than the Accord. An aerodynamic overhaul adds widely spaced front headlights, muscular fenders, dual exhaust on the s trims, and a sporty fastback-like roofline. In addition, the use of lightweight materials compensate for the extra pounds added by the increased dimensions.

The sedan gets two new engines, which Mazda claims makes the 6 more powerful than its competitors. Also upgraded, a stiffer chassis improves handling and cornering, and stability control is now standard across the line. Available in four trims this year (the value SV, Sport, Touring, and Grand Touring), all but the base trim come in i or s designations, with the s adding mostly appearance-oriented sport features, such as larger 17- and 18-inch alloy wheels and dual exhaust pipes.

Giving the Altima a run for its money, the 2009 Mazda6 lets parents and commuters be practical while still experiencing a little fun and a lot of enjoyment behind the wheel. 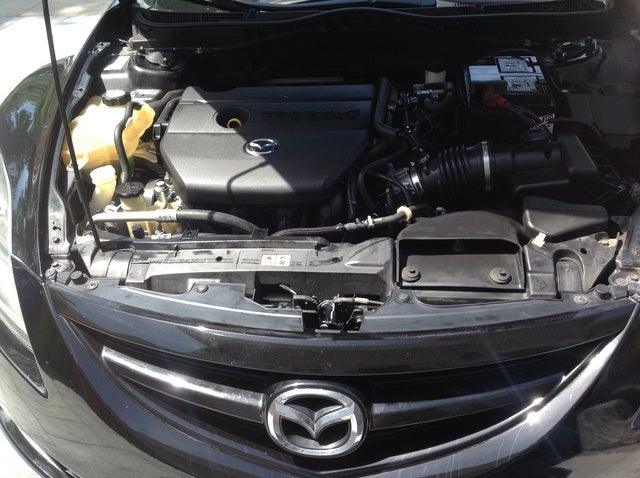 Two new powertrains take care of complaints from past owners that the '09 Mazda6 couldn't keep up with the Accord and Camry. Now, its new V6 puts it at the head of its class. All i trims feature the 16-valve, 2.5-liter DOHC inline-four engine, which ups horsepower from last generation's 2.3-liter by 14 points. Paired with either a 6-speed manual or 5-speed shiftable automatic, the engine delivers 170 hp and 167 lb-ft of torque, with 0-60 numbers around 10 seconds. While not a sports sedan, the four-cylinder proves satisfying around town and in highway driving, and bests the Camry and Accord in terms of power ratings. Though the 2009 Mazda6 has gained some weight, its use of lighter materials prevents any drag on the engine power and allows the 2.5 to actually offer better fuel economy (21/29 mpg) than the old 2.3 engine.

For maximum fun and performance closer to Mazda's “zoom-zoom” tag line, the s trims offer a 24-valve 3.7-liter DOHC V6 (replacing the old 3.0), that nearly doubles the horsepower and torque ratings of the four-cylinder. The only transmission is a 6-speed adaptive shiftable automatic, and together the powertrain puts out 272 hp and 269 lb-ft of torque, just beating the power ratings for the Altima and Accord. In comparison tests, reviewers rate the V6 as quicker off-the-line and at full throttle than the rest of the competition. The unfortunate tradeoff of the extra punch and pep is reduced fuel economy. At 17/25 mpg, the V6 puts the 2009 Mazda6 near the rear of the pack in terms of fuel economy.

For those more interested in budgetary concerns, the 2.5 performs confidently in both city and highway situations, according to test drivers, perfectly fine for the everyday commuter. Although it does exhibit some whine and effort at high speeds, passing and merging never pose a problem. For those wanting a bit more fun and excitement in their commute, the V6 offers plenty of both. Test drives find all the transmissions to be smooth and well-suited for the engines, although a few reviewers feel the 6-speed automatic can be disappointingly slow when downshifting. 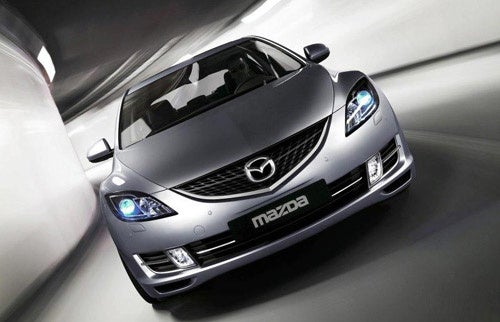 Despite a slight increase in size and weight, the '09 Mazda6 maintains its reputation as a sports sedan, exhibiting agile handling, tight cornering, and a firm and supportive ride. It behaves confidently on city streets, but quickly lets loose outside of urban confines, where it takes curves and winding roads precisely and with good driver feedback translated through the steering wheel. Both engines perform well, with the V6 adding extra zip and flourish, along with quieter and smoother behavior when passing or merging on the highway.

The firm double wishbone front and multilink rear suspension surpasses the softer ones of the Camry and Accord, but never translates into a harsh ride. In fact, both i and s models feature good bump absorption, while dips barely register in the cabin. An increase in chassis rigidity of 30% reduces vibrations and engine noise inside the cabin, although some reviewers do notice wind noise at high speeds. The stiffer body also reduces the nosediving tendencies that often accompany sudden braking. Brakes in general respond quickly and accurately, with 60-0 stopping distances of 125 feet.

The redesigned '09 Mazda6 displays minimal body lean, lending to its sporty vibe, and its turning circle has been reduced by three feet. Steering is generally crisp and nicely weighted, although the understeer that accompanies most family-size sedans continues to be present. Reviewers are happy to report that the Mazda6 has lost none of its fun driving dynamics, and nearly every owner gushes about the sporty ride. Comparison tests by some critics say the Mazda6 falls slightly short of both the Altima and Passat in terms of power, performance, and handling (the Altima weighs less and has tighter steering characteristics), but the 6 surpasses both in terms of price, and unlike the Passat it does not require premium gas. 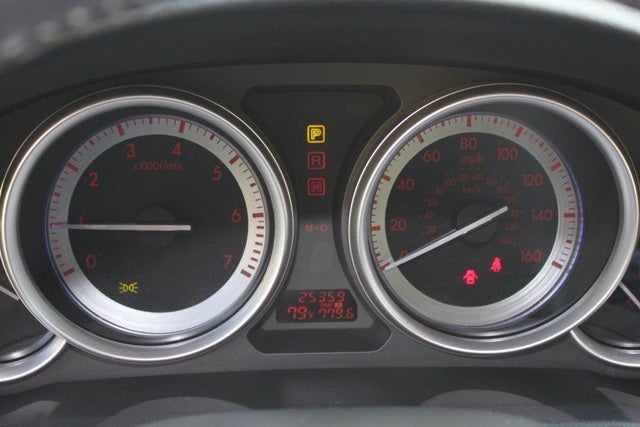 Owners and reviewers love the new look of the interior, which some drivers claim feels more like a Lexus than an affordable family sedan. Others call the 2009 Mazda6 a poor man's Acura. The added dimensions provide a spacious cabin, with plenty of comfortable room to spread out in both the front and back seats. Head and legroom in both rows easily accommodates those over six feet, although the coupe-like roofline makes the back seat slightly more cramped. Front passengers get over 42 inches of legroom, compared to 38 inches in the back, and adding 2. 5 inches to the overall width allows rear passengers to sit comfortably without bumping shoulders. The 16.6 cubic foot trunk is 10 percent bigger than the previous generation.

Rear seats split-fold 60/40 for easier trunk access and feature a fold-down armrest that offers storage. Materials generally feel soft to the touch and of good quality, but some reviewers find the continued use of hard plastics mars an otherwise high-end interior. The black “patterned” trim and upholstery in the Touring gets mixed reviews. The firm seats provide good support without becoming too hard or uncomfortable on long trips. Standard tilt and telescopic steering aids driver comfort. Both SV and Sport feature manual seat adjustments, while the Touring and Grand Touring add power functions. However, lumbar settings in either power or manual form are not available.

Controls sit within easy reach of the driver, and the sweeping center stack trimmed with metallic accents flows smoothly into the dash. Gauges and dials feature an orange-red backlighting, and all trims but the SV and Sport feature electronluminescent gauges. Some reviewers find that the steering wheel obstructs some switches, while the optional navigation and satellite radio controls sit too far away from the driver for optimal convenience.

The 2009 Mazda6 comes well equipped, and owners rave about the long list of standard features and gadgetry. Even the base SV, the value trim, offers power windows, locks and mirrors, a CD player, and wheel-mounted audio controls. The Sport adds cruise control, remote entry, and an MP3 jack. The sportier Touring dresses things up with foglights, a power driver's seat, leather trim on the steering wheel and shifter, and push-button start. Most of the features on the Grand Touring can be added as options on the lower trims. These include heated leather front seats, driver's memory settings, auto-dimming mirrors, xenon HID headlights, and Bluetooth. For a few dollars more, a 6-CD changer and Bose sound system are available. This sound system earns raves from owners. Other options include a sunroof and a navigation system. This last option is offered only on the Grand Touring. 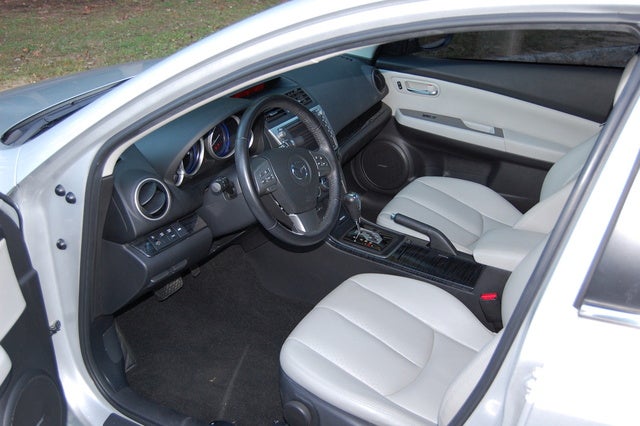 The 2009 Mazda6 has not yet received crash test ratings, but it features a full array of safety equipment, and adds stability control to the standard list for all trims. The four-wheel disc brakes include 4-wheel ABS and electronic brakeforce distribution. Dual front-side and side curtain airbags for both rows are also standard, along with traction and stability control, and a tire monitor. Stiffer body parts in the front and back reduce the amount of nosedive when braking suddenly. Standard on the Grand Touring and optional on all others, the blind spot monitoring system receives high praise from owners.

Does any owner of the new '09 Mazda6 not love their car? Negative comments can be counted on one hand, with most focusing on the fuel economy, four-cylinder power and whine, the lack of mirrors with turn signals, and the absence of air vents for the rear seats. In other words, owners have to struggle to come up with complaints. Highlights of Mazda6 ownership include the spacious cabin and trunk, the quiet ride, and the updated looks both inside and out. Drivers rave about the sporty handling and amount of fun behind the wheel, along with the V6 power and performance. At the top of many lists is the long list of technical features that one driver compares favorably to those found in a Lexus. Getting particular mention are Bluetooth, the Bose sound system, push-button ignition, and the blind spot monitor.

CarGurus drivers agree on all fronts. Fun seems to be the operative word to describe the '09 Mazda6, along with comfortable, roomy, and tossable. The only negative so far addresses the disappearance of the hatchback version.

Bababuyacar Its been a great car. Good everything. Nice powerband and engine feel. After owning quient unreliable junk i like hearing the engine. lExceptional turning radius to real world driving. I love making tight u-turns in places only civics dare.

Users ranked 2009 Mazda MAZDA6 against other cars which they drove/owned. Each ranking was based on 9 categories. Here is the summary of top rankings.

Have you driven a 2009 Mazda MAZDA6?
Rank This Car

My 2009 Mazda 6 GH alarm goes off only in the spring summer when the sun is on the car! Weird, any advice would be welcome. It never goes off in the winter ......Help!

361 views with 3 answers (last answer about a year ago)

My 2009 Mazda 6 will not crank or turn over. It is a push to start, but even when they key is inserted into the ignition and the start button is pressed, nothing happens. ( I also tried the spare ke...

I took my car to get diagnosed because the alarm was going off and waking me up constantly. They said it was the driver side rear door actuator but they told me the repair would be $270 which is RI...

What RWD Manual Transmission With 2.5 DURATEC

I want to use a the DURATEC 2.5 engine in my 67 MGB project, however Id like to find out which RWD transmissions are compatible in order to start gathering measurements. My guess would be possibly a...

Part Fell Off Of Car

As I turned into my driveway i heard a loud thud and after shutting my car off I found this at the spot I had turned in. Wondering what it is, its about 4.5in long.