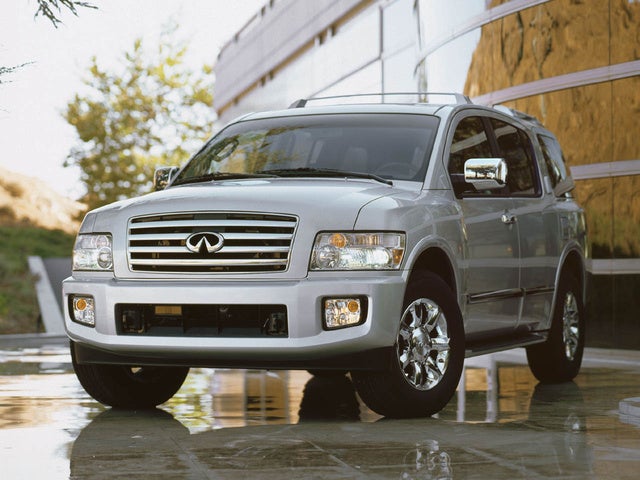 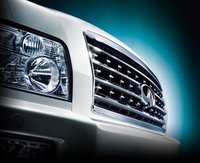 2009 is a carryover year for Infiniti’s upscale Nissan Armada, the QX56. After 2008’s cosmetic refresh, buyers will see nothing new for 2009. The four-door luxury SUV seats seven with the optional second-row buckets, or eight with the 60/40 bench. Available in two trims, Base and AWD, the QX56 shares the same 5.6-liter V8 across both trims, and it produces 320 hp and 393 lb-ft of torque for a maximum towing capacity of 9,000 lbs.

Other standard features include rear obstacle detection, a wireless cell-phone link, a load-leveling suspension, and a rearview camera, as well as 20-inch wheels and keyless access and starting.

The Base trim beats out the 4WD by only 1 mpg, arriving at 12/18 and 12/17 mpg, respectively, although the maximum towing capacity of the 4WD is 100 lbs less than the Base's. Both come with a five-speed automatic transmission. The four-wheel-drive system does have a low-range gear for off-roading and can be left engaged on dry pavement.

Gary When I, first test drove an 2009 2wd model it; was so comfortable and Tall seating. I could see everything in; the Cabin and front view was Pleasing. But; I noticed a few blind Spots on the, right front corner of the Suv. It Shifted and Ran perfectly like; a brand new Truck etc. It tended to; ride and feel like a Titan all the way around the back roads. I want to; get one of these but; I may need a few upgraded Toys to, achieve better overall MPG economy.

Where Is The Category For QX56

I'm trying to search for the infinity QX56 but it's not in the category.