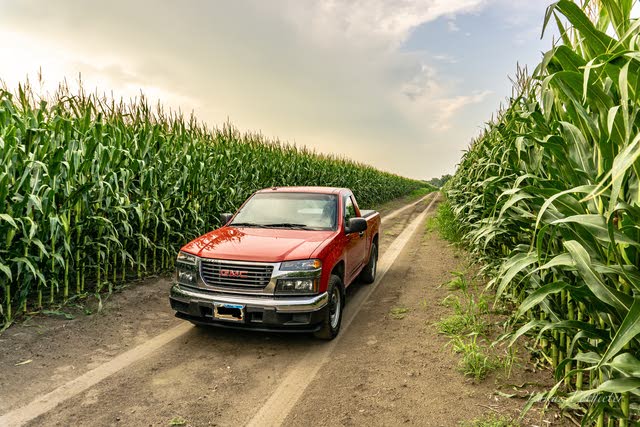 The 2009 GMC Canyon is, except for one year of free Onstar service and the re-labeling and minor realignment of trim choices, a carryover from ’08. This mid-sized pickup is available in RWD or 4WD as well as a variety of cab configurations, wheelbase widths, bed lengths and a choice of three engines - one of which is the long-awaited 300-hp 5.3-liter V8 SFI - which adds up to some 20 trim levels. This doesn’t even count Canyon work trucks which also come in the same drive, configuration and engine choices as the non-commercial trim levels.

The base Canyon SL for ‘09 packs the standard 2.9-liter 185 hp I4 and the standard five-speed manual transmission for an EPA estimated 20/26 mpg in the RWD and 18/24 in the 4WD. Opting for the four-speed automatic drops mileage to 16/23 4WD and 17/24 RWD. Canyon SL also offers RWD and 4WD trims, 111.2-inch, 125.9-inch and 126-inch wheelbase widths, three-passenger Regular Cab, five passenger Extended Cab and five passenger Crew Cab configurations and either the 72.8-inch bed with Regular or Extended Cab or the 61.1” bed with the Crew Cab. Standard features for the SL include A/C, cruise AM/FM in-dash radio with four speakers in the Regular Cab and six in the Extended and Crew Cabs, a tire-pressure monitoring system and 15-inch aluminum wheels.

For ’09, the SLE-1 features the same 2.9-liter, the same drive train choices and the same wheelbase widths, cabs and bed-lengths as the base SL. Additional features for the SLE-1 include a CD player with MP3 capability and speed-compensated volume control, chrome interior accents, integral armrest with storage inside, SLE Deluxe Cloth seats, integral outboard head restraints and dual cup holders.

The 2009 Canyon SLE-2 features the unique 246-hp 3.7-liter inline-5 which GM claims will put out the power of a V6 yet deliver the economy of an I4. The 3.7-liter I5 is coupled with a four-speed automatic, the only tranny available with this engine, and gets an estimated 17/23 in the RWD configuration and 16/24 in 4WD. SLE-2 includes standard features such as the drive train, cab and wheelbase choices of SL and SLE-1 as well as power windows, locks and mirrors, deep-tinted glass and a rear sliding window.

Owners of the ’08 GMC Canyon were somewhat disappointed with fuel economy and some found Canyon noisy and had some issues with the four-speed automatic downshifting up hills. Most owners, however, praised Canyon’s looks, roominess, comfortable seats, acceleration and convenience features.

Have you driven a 2009 GMC Canyon?
Rank This Car

Blinkers Work But No Sound In A Gmc 2009 Canyon

Where does the blinker sound come from and how to replace it?

I changed the rear main seal in a 2009 canyon. I unhooked the battery awhile doing it and changed everything out. It went back together without a problem and the owner of the truck hook the batter...

I have a 2009 GMC Canyon with about 117,000 miles on it. It has a problem where it keeps wanting to stall when I'm driving it. It stalls at stop lights, stalls when going around corners (left or rig...

Who Will Replace The Abs Module