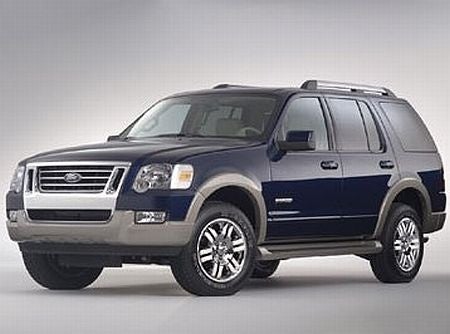 Just because the Explorer’s primary purpose is to haul things around doesn’t mean that process needs to be as frustrating as its controls seem to want to make it.

Yes, the controls and levers of the Explorer leave a bit to be desired, but that’s hardly why you’re buying one, right? Get the V8, and be pleased that you can lug around pretty much anything you can attach to the rear bumper in great comfort and relative luxury, especially at its price.

Since its redesign in 2006 and a refresh last year, the Explorer has been trying desperately to convince consumers that it’s still okay to drive an SUV. With rumors of a transition to a unibody design in the future, perhaps as early as 2011, the Explorer might just serve as both the debut and swan song of the practical midsize SUV.

Almost unchanged since 2008, the Explorer comes in XLT, Limited, and Eddie Bauer trims, with the option of rear-wheel drive, all-wheel drive, or full-time four-wheel drive, two engines, and a seating capacity of seven. 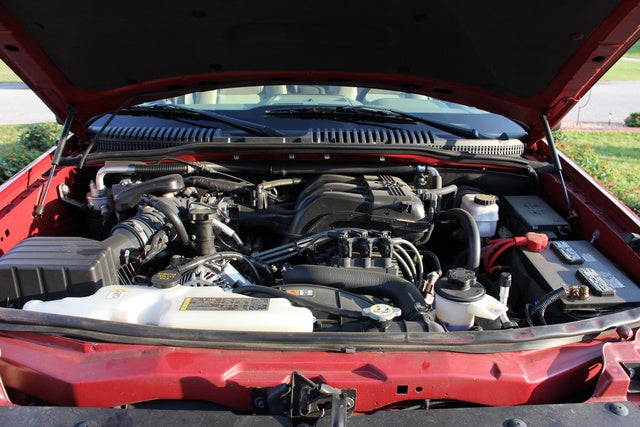 The Explorer gets power from a 210-hp, 4.0-liter V6 mated to a five-speed automatic or a 292-hp, 4.6-liter V8 that comes with a six-speed automatic. The V8’s 7,285-pound towing capacity improves on the V6’s already competent 5,375-pound limit. Available in either RWD, AWD or full-time 4WD, the Explorer still has a low gear that can be engaged for off-road adventures.

Both engines provide quite a bit of power, with the V8 able to make the 0-60 scoot in less than 7.5 seconds. The transmissions are smooth regardless of driving conditions, although some reviewers have noticed a bit of delay in full-throttle downshifting with the six-speed.

Because of the addition of the extra gear for the V8, both engines are rated at 13/19 mpg, regardless of rear, all, or four-wheel drive, although reviewers have reported an average of 15-15.4 mpg, depending on configuration and use.

Despite bad press in recent years, the Explorer has always been lauded as one of the best handling and riding SUVs out there. It would be easy to criticize it with regard to an SUV’s natural tendency to lean a bit in turns, or because of its lack of immediately precise handling, but to do so would require ignoring that this is indeed an SUV. Not even a crossover, an actual SUV.

That said, the Explorer handles very nicely, helped considerably by an independent rear suspension as well as stability and traction control. Steering and handling are both responsive, and pedal feel is robust.

Big news for 2009 is the addition of Trailer Sway Control, which detects and corrects sway in the trailer by way of automatic braking and torque adjustments.

The interior is undeniably the weak point of the Explorer. Many complaints have come in regarding ergonomics and the controls of the vehicle, including a shift lever that hinders reaching the climate controls, an awkward turn lever, and out-of-reach audio controls. Indeed, even the door handles have been hit with complaints, which is a shame considering that otherwise, the interior is well-constructed with mostly pleasant materials and quite comfortable.

While a bit of a step to enter, once inside the Explorer offers plenty of room for both heads and legs in all three rows, although the third row lacks a bit of the comfort of the first two.

For a more rugged look, the Eddie Bauer has leather seats with a darker wood interior trim, platform stepping, power driver’s seat, toned rear bumper, and luggage rails. Also available are a luxury package for the upgraded audio system as well as heated seats and mirrors.

A myriad of safety features including ABS, traction and stability control, anti-skid, and front and curtain airbags come on the Explorer, as well as the new-for-2009 Trailer Sway Control. NHTSA ratings have come in at five stars across the board, with the exception of rollover resistance, which garnered a three-star rating.

For a midsize SUV, it’s hard to beat the Explorer. Great suspension, towing capability, safety features, drivetrain, and overall comfort have been extremely strong points of the model since its inception and continue while the Explorer endures as one of the last true midsize SUVs. Still, a lot of criticism has been heard regarding the controls, which have been labeled “ergonomically challenged.”

Users ranked 2009 Ford Explorer against other cars which they drove/owned. Each ranking was based on 9 categories. Here is the summary of top rankings.

Have you driven a 2009 Ford Explorer?
Rank This Car

The AC only blows on level 4 (high). It does blow cold air, so I know it's not related to the refrigerant, etc. I have replaced the resistor, the blower motor, the relay, checked all related fuses, ...

My AC Blows Air But Not Cold Air And Has No Leaks And Is Fully Charged.

I have 2009 Ford Explorer Sport Track and my AC stopped blowing cold air. I had it at a dealership (not Ford) and they spend a day on it and could not find the reason? No Leaks and fully charged. ...

How To Loosen The Tensioner On The Serpentine Belt

Dear Sir, I have Ford Explorer 2009, I have a problem (check engine light ON), after Computer test i have this Code ( p0106 ),so car mechanic told me to change the EGR sensor, I buy orginal from F...