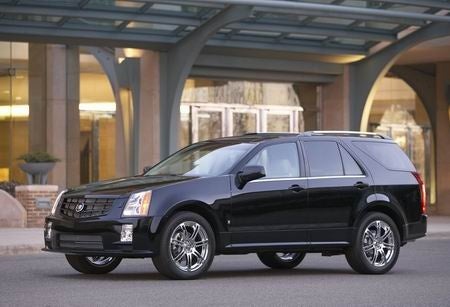 The '09 SRX has some blind spots out the back, and the optional third-row seat might sound nice but lacks any real utility as a passenger-carrier.

The 2009 Cadillac SRX combines the utility of an SUV with the power, performance, and handling of a sport sedan. A high-quality build and premium luxury interior never let you forget you're in a Cadillac and prove a serious and worthy rival to the German competition. If fuel economy and visibility issues matter less than high-end features and powerful engines, the SRX offers a solid alternative to foreign imports.

One of the roomiest and most powerful crossover SUVs on the market, the 2009 Cadillac SRX returns unchanged, in preparation for its replacement in 2010 by the upcoming BRX. Available with both rear-wheel and all-wheel drive, this midsize luxury wagon exhibits tight and responsive handling, relative stability, and more interior space than many of its direct competitors.

The '09 SRX seats five in two rows, with the option to add a third row for two very small passengers. A wide array of power features, such as adjustable pedals, a power liftgate, and a power-fold option for the back row, provide families the easy convenience they need when loading and unloading both children and cargo. New for 2009 and standard on all trims, the adaptive remote start feature turns on the engine, sets the cabin temperature, and runs the defroster at the touch of a button on the key fob.

Trim names refer to the engines under the hood, with the more powerful V8 offering more power accessories and riding on larger 18-inch wheels, compared to the 17-inch ones on the V6. An optional Sport Pack adds body-colored moldings, dual exhaust tips, 20-inch chrome wheels, and AWD with a limited-slip differential.

While the main focus of the '09 SRX remains the ultimate in driver and passenger comfort, the crossover also offers adequate family utility and storage space. And after the kids have been dropped off at soccer practice, the SRX will please parents with its satisfying combination of sporty driving dynamics and two very powerful engines. 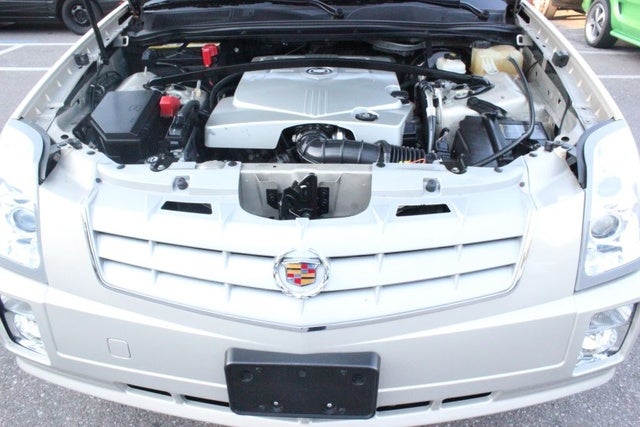 The SRX offers two trims, each with its own engine. A 24-valve, 3.6-liter DOHC V6 gets paired with a five-speed shiftable hydramatic automatic transmission. This powertrain delivers 255 hp and 254 lb-ft of torque at a nice low 2,800 RPM. It's capable of towing 2,000 pounds. Although it features electronic throttle control and variable valve timing, the '09 SRX gets only 15/22 mpg, and even less with all-wheel drive.

A 32-valve, 4.6-liter DOHC V8 comes with a six-speed shiftable automatic and puts out 320 hp and 315 lb-ft of torque. Its towing capacity boosts to 4,250 pounds. Mileage figures drop slightly to 13/20 mpg. Both engines prefer premium gas.

The SRX's horsepower numbers actually lag behind those of some of its competitors, such as the Acura MDX and Lexus RX 350, but the Cadillac weighs significantly less than those crossovers, which means when it moves, it moves quickly. Both engines offer great acceleration and strong passing power, but the V8 remains the preferred powerplant, delivering a quiet, smooth ride without sacrificing sport-like performance.

Sharing its Sigma platform with the CTS sedan, the 2009 SRX drives more like a car than an SUV or wagon, with a stable and balanced feel behind the wheel, and a firm, but smooth suspension. Reviewers come out of test drives impressed with its handling dynamics, responsive and weighty steering, and tight turning radius – features not usually found in an SUV. Its stable and controlled ride can be explained by the SRX's low center of gravity and its long wheelbase. At 116.4 inches, it measures longer than any other crossover in its class. The taut maneuverability feels more like a sport sedan than a family utility wagon.

Critics say the agile handling improves with Magnetic Ride Control, an option available with both trims. This new technology uses sensors to gauge driving conditions and adjusts the suspension accordingly. Without it, test drivers say the 2009 SRX picks up every bump in the road and interferes with passenger comfort. With MRC, the crossover maintains its nimble sportiness while delivering a smooth and silky ride.

Tires provide good road grip with minimal noise or harshness, and the automatic AWD system sends torque to the rear wheels when it senses slippage, although it is not designed for off-roading. An optional limited-slip differential with the AWD improves stability further. Both the V6 and V8 offer quiet power, and the various transmissions find their gears easily and smoothly.

Critics and owners alike praise the interior passenger and cargo space in the 2009 SRX. The crossover seats five adults comfortably in two rows, with the option to add a third row for two more passengers. This extra row power-folds flat, but offers scant legroom and feels far too cramped to accommodate an adult or even an older child. The first two rows, however, provide plenty of head- and legroom, with the second row sliding fore and aft to accommodate longer-limbed riders. Despite the movement capability, access to the third row remains tight. The second row split-folds 60/40 nearly flat and features a fold-down armrest that doubles as a storage compartment.

Although the cargo bay expands from 32 cubic feet to 70, the SRX's cargo capacity measures less than the rest of its class, such as the Acura MDX and Volvo XC90. Still, owners find its storage space plenty adequate for family needs. The cargo bay comes with a three-compartment storage bin to organize loads or keep certain objects apart. Both trims have a power liftgate for more convenient access, and a standard roof rack adds more storage options.

Test drives reveal simple, large, and legible controls intuitively laid out on the swooping center stack. Drivers get 42 inches of legroom and 40 for their head, and an 8-way power driver's seat provides plenty of lumbar and height support. A power passenger seat comes standard with the V8 and optional with the V6. The SRX offers a tilt steering wheel, but lacks a telescoping function. One critic found it hard to get a comfortable wheel position despite its six tilt settings. The brake and gas pedals also sit at different heights, and one driver says switching between the two can be a strain on the ankles. One way to solve this is to move up to the V8 trim, which adds standard power-adjustable pedals.

The cabin of the '09 SRX oozes luxury, with supportive leather seats and a whole host of creature comforts, although a few professional critics say some of the plastic materials have a low-grade look and feel to them. The V6 features the new remote start, a power driver's seat, wheel-mounted cruise and audio controls, Bluetooth, dual-zone climate control, leather and alloy trim, and an 8-speaker Bose sound system for the CD/MP3 player, which also includes satellite radio and an MP3 jack. The V8 upgrades with more power features, such as the pedals, a power passenger seat and memory settings for the driver. Heated seats feel great in the winter, and real wood trim takes the premium upscale ambience up a notch. The sound system adds a 6-CD changer.

The favorite option of owners is the UltraView sunroof. Measuring 5.6 square feet, it covers most of the SRX's roof and opens up the sky to both front- and second-row passengers. Other options add a DVD player, a navigation system, and a Bose 5.1 surround sound system.

Luxury features aside, the 2009 SRX remembers its family-car focus by offering an array of standard safety equipment. All trims come standard with traction and stability control and 4-wheel ABS brakes with brake assist and electronic brakeforce distribution. The dual front-side airbags feature a passenger cutoff sensor, and side curtain airbags are standard for the first two rows. A tire monitor measures pressure in both the 17- and 18-inch wheels, and other standard features include OnStar, automatic headlights, and foglights. Parking assist sensors address some of the rear visibility issues caused by thick pillars. The V8 trim adds high-intensity xenon headlamps to the lighting package.

Despite this impressive list, the '09 SRX earns a mixed bag of scores in crash tests. The NHTSA gives it four stars in frontal impact and five stars in side impact tests, but only three in rollover situations. One test driver discovered that the rear-wheel drive trims turn over quite easily, even when employing the standard stability control.

The 2009 SRX earns nothing but favorable reviews from owners. In fact, no consistent negative comments about the SRX crop up on any user websites. Owners agree overwhelmingly that the crossover earns high marks in the looks and style department and exceeds expectations in terms of high-end luxury and premium features. Drivers report a spacious and very comfortable cabin, while the roomy trunk reminds owners of the SRX's SUV-like utility. Sporty handling and a solid, confident ride impress owners, who also admit to liking the fuel economy ratings of the V6. As for favorite features, the huge sunroof tops the list.

No reviews of the 2009 SRX by CarGurus owners have ben posted yet, but comments on the similar 2008 model can easily be applied to the current year. CarGurus drivers list the high-quality interior design and materials and the luxury feel as top characteristics of the SRX. They also like its smooth handling and SUV-style roominess. Drivers like the combination of truck-like utility with car-like maneuverability.

Have you driven a 2009 Cadillac SRX?
Rank This Car

09 Cardillac SRX Won't Move Once The Engine Warm Up

I just got the car from Auction. It usually starts after some hesitations; I always need to crank it several times before it starts. But once it start, you can move it without problem until after it's...

170 views with 6 answers (last answer about a year ago)

how do I trouble shoot this code

What can the issue be on an overheating 2009 Cadillac SRX

Does The 2009 Cadillac Srx4 Come Equipped With Bluetooth Not Onstar But Blu...