The Buick LaCrosse changes little for 2009 and remains a comfortable, competent, moderately equipped family sedan with a choice of V6 or V8 engines and a plush ride that should appeal to drivers who shy away from sportier cars.

Some reviewers call the '09 LaCrosse's exterior styling unexciting and find fault with its tight back seat and limited upscale amenities compared to similar sedans from competitive automakers.

The 2009 Buick LaCrosse will appeal to more conservative drivers who appreciate a plush, comfortable ride and an appealing though uninspiring design. The LaCrosse handles well as long as it's not pushed to the limit, and offers well-mannered handling and a list of standard and optional features that will meet most drivers' needs. However, it lacks in a number of areas, including fuel economy and rear-seat legroom.

Buick made minor updates to its LaCrosse midsize sedan for 2009. The standard equipment list now includes heated exterior mirrors for all trims, as well as optional Bluetooth wireless technology, which connects compatible cell phones to the sedan's audio system for hands-free calling. In addition, Buick adds a new exterior color, Quicksilver Metallic, for 2009.

Now in the second year of a design update, the four-door LaCrosse sports a sculpted exterior appearance highlighted by Buick's signature chrome waterfall grille and chrome exterior accents. Clean and contemporary, the overall design draws middling marks from some reviewers, who call it unexciting and too conservative when compared to competitors' vehicles. According to reports, Buick plans to rename or replace the LaCrosse in 2010, as part of GM's current restructuring of its models and brands, so drivers who find the LaCrosse's styling and features appealing may be able to purchase the 2009 version at a competitive price.

The four-door, front-wheel-drive LaCrosse seats five passengers. Available trims include the V6-powered CX and CXL, as well as the V8-powered Super trim. While the LaCrosse offers a number of upscale features, including standard OnStar for all trims and heated front seats for the CXL and Super trims, some reviewers recommend better-equipped competitive sedans available in a similar price range. 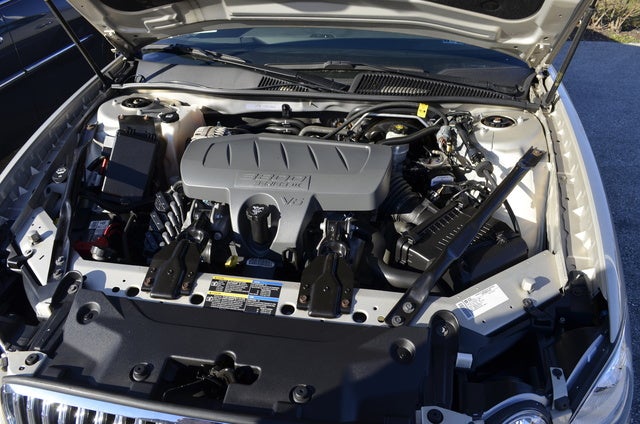 The LaCrosse's engines carry over from the previous year with no changes. A 3.8-liter V6 engine, which powers the CX and CXL trims, generates 200 hp and 230 lb-ft of torque at 4,000 RPM. The engine runs on regular gas and manages up to 28 mpg on the highway and 17 in the city. With a 17-gallon fuel tank, it can run up to 476 highway miles on a single tank of gas, according to Buick.

Stepping up a notch, the 5.3-liter V8 engine that powers the upper-end Super trim produces 300 hp and 323 lb-ft of torque at 4,000 RPM. Thanks to Active Fuel Management, which increases fuel economy by up to 12 percent (according to GM), the V8 engine ekes out 24 mpg on the highway and 16 in the city. Both engines link to a four-speed electronically controlled automatic transmission with overdrive.

Some reviewers describe the LaCrosse's performance as conservative compared to other vehicles in its class. Even the Super trim, with its V8 engine, lacks in the performance department when compared to similar luxury sedans, reviewers note.

The LaCrosse's ride and handling, like its performance, can best be described as conservative and relatively unexciting. The LaCrosse rides on an independent front and rear suspension with Bilstein struts, tuned for a soft, cushioning ride. While the ride appeals to drivers who prefer a smooth, plush driving experience, some find it lacks a firm, dynamic feel. Also, the LaCrosse's handling comes up short when pushed to the limits, displaying excessive body roll, some reviewers note. As a result, it probably won't appeal to enthusiasts who prefer more responsive handling.

Buick has taken steps to ensure a quiet ride, thanks to the LaCrosse's QuietTuned cabin. The QuietTuning process uses an acoustic laminated windshield, triple door seals, and acoustic insulation throughout the vehicle to reduce, block, and absorb exterior noise and vibration.

The LaCrosse offers a fairly spacious cabin, though legroom can be tight in the rear seat. The seats are well-padded and comfortable for most long-range trips. A flip-down third front seat between the driver and front passenger provides seating for a sixth person, though most agree it's not comfortable for larger adults.

The cabin comes equipped with numerous interior storage spaces and bins for various types of gear. In addition, the LaCrosse offers a generous 16 cubic feet of trunk space, which ranks as one of the most spacious trunks for a midsize sedan. An available 60/40 split-folding rear seat expands cargo space, although its functionality is limited due to a small pass-through into the cabin.

While the LaCrosse strives for a premium interior feel, it has achieved only limited success in that area, according to some drivers and reviewers. While a definite improvement over previous versions of the LaCrosse, the quality of interior materials gets overall mixed reviews. The wood trim in particular has a fake look, some note. On the other hand, the gauges and instrument cluster generally get good marks for location and ease of use.

While the LaCrosse received a five-star rating, the highest possible, in the frontal crash test administered by the National Highway Traffic Safety Administration, reviewers note the safety of the passenger in the middle front seat wasn't part of the test, so drivers should use caution when allowing occupants to use that sixth seat, especially children. In addition, the LaCrosse didn't score as well in side-impact crash tests.

Standard safety features for the LaCrosse include front and rear crumple zones and a dual-stage front-passenger airbag system. In addition, the StabiliTrak traction control system, which helps drivers maintain control of the vehicle in slippery or unstable conditions, comes standard on all trims. Other standard features include four-wheel antilock brakes and a theft deterrent system. A rear parking assist comes standard on the Super trim and is available on the CXL trim. Drivers should note the LaCrosse does not come with a front passenger airbag on/off switch, which is included as standard equipment on many competitors' vehicles.

Owners rate the LaCrosse as fair to good in a number of areas, including its ride, performance, and interior. The Super trim's V8 engine receives positive marks for its performance, though some owners note the automatic transmission has been programmed to carefully ramp up power, which limits the V8's aggressiveness. Owners also give the LaCrosse good marks for value and reliability, although many find it lacking in sporty features. However, they give it thumbs up as an everyday family car.

CarGurus drivers like the LaCrosse's interior comfort, as well as its overall quality and value. However, they find fault with its fuel economy and rear-seat legroom.

What's your take on the 2009 Buick LaCrosse?

Have you driven a 2009 Buick LaCrosse?
Rank This Car

2009 Buick Lacrosse Lights On With No Codes.

These lights for ABS, Traction Control, and Tire Monitoring System came on after i got my ignition control module changed, the only actual defect I am noticing is I cant read the tire pressure on on...

83 views with 2 answers (last answer about a year ago)

Abs, Traction Control Lights Are On

My lights come on for the ABS and traction control and it looks like on the front side driver wheel I have two wires hanging down that look like they're disconnected could that be the problem?

After changing out bad battery, nothing comes on. Tried to jump it and it just clicks like it's not getting enough volts. All connections are clean and tight.