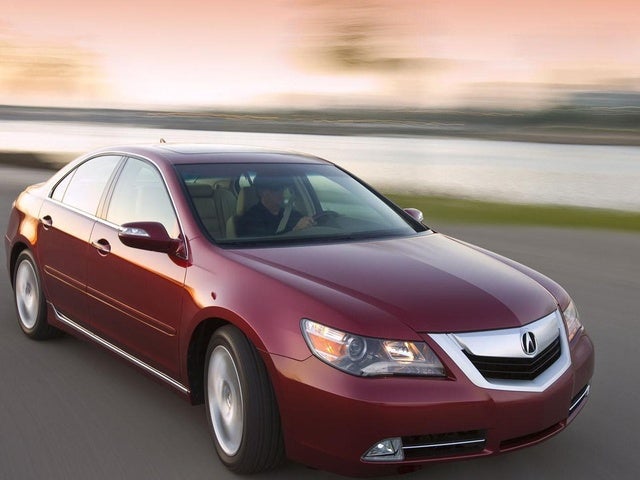 Acura's premium sedan, the luxury RL, sits at the pinnacle of the Japanese automaker's lineup, but seems to stay under the radar of upscale drivers. It has always offered a wide array of innovative technology combined with interior plushness, but its rather bland exterior and lack of a V8 engine may be turning consumers towards BMW and Mercedes-Benz (RL sales are down 45%). To that end, the 2009 Acura RL goes through a moderate makeover, gaining a more muscular build, bigger engine, and tweaks to its cutting-edge technology.

As gas prices stay high, the desire for V8 power continues to drop, so the fact that the RL still does not offer one may be to its advantage. Instead, Acura has upped its V6 to 3.7 liters. The V-TEC engine features variable valve timing for both intake and exhaust (for better fuel economy, Acura says). It boosts horsepower by 10 to 300 hp and torque by 15 to 271 lb-ft. The sequential-shifting 5-speed automatic gets revised and offers both paddle-shifters and a regular gearshift. The package delivers a smoother, quieter ride overall.

The proven Super Handling All-Wheel-Drive system, which distributes torque as needed between front and rear axles and also to each wheel individually, is now quicker and more responsive, with a tendency to favor rear-wheel drive ( a nod to rear-wheel-drive cars offered by many of the RL's rivals). It provides solid traction control during cornering and in slippery road conditions and is helped by an updated suspension that receives larger stabilizer bars and higher-rated coil springs. ABS brakes, traction and stability control, dual front-side curtain airbags, and new active head restraints earn a precedent-setting five stars in every category of the NHTSA crash tests. The optional Collision Mitigation Braking System uses radar to detect oncoming collisions and warns the driver. If there is no response, it applies the brakes and tightens the seat belt. The technology can be a lifesaver, but drivers report it can also be uncomfortably jolting.

On the outside, the 2009 Acura RL gets a front facelift, receiving the traditional Acura grille with its chrome bar “plenum.” A boxier nose and wider hood give the luxury sedan a more aggressive profile. The new RL looks bigger, but is actually the same dimensions on the inside, and the trunk is still disappointingly small at 15 cubic feet. But the interior gets refreshed with updated wood and alloy accents, a new 10-way power passenger seat, easier-to-read gauges, added sound insulation, and heated and cooled front seats. Also added is the first-ever real-time weather information in any car, joining the real-time traffic reports on the RL's navigation system. The 10-speaker Bose sound system receives upgrades and includes a USB port and Bluetooth. Another technological wonder is the sun-sensing climate control, which warms and cools the interior of the car according to the position of the sun.

Improvements to the 2009 Acura RL only enhance its already solid reputation for precise handling, driver control, and a smooth and quiet ride. The AWD system performs expertly, and the interior does not skimp on upscale luxury materials or the creature comforts required by drivers desiring high-end treatment. With its lack of V8 power becoming a less-important disadvantage and Acura's concerted efforts at jazzing up the exterior, the RL may soon become a growing blip on more buyers' radar screens.