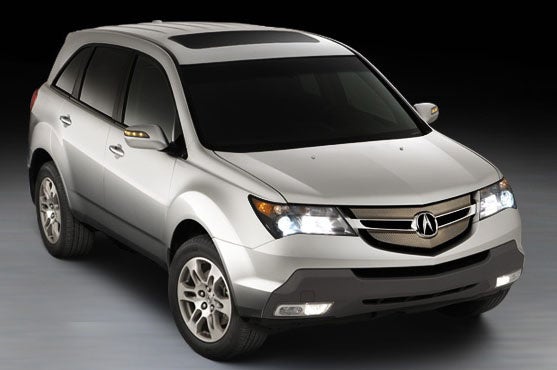 For handling, comfort, luxury interior amenities, and safety features, the 2009 Acura MDX midsize SUV ranks at or near the top of its class, delivering a winning combination of a sedan-like ride, SUV functionality, and just about any plush feature an owner could want.

Despite its high level of fit and finish, the MDX exhibits some minor flaws in detail work, and owners overall are dissatisfied with the MDX's fuel economy.

While reviewers generally rave about the 2009 Acura MDX, praising its handling, interior, reliability, and safety features, owners are more discerning, citing odd noises, poor visibility out the back, and other minor irritations that impact their enjoyment of the driving experience. Given these conflicting viewpoints, prospective owners should spend some time in the vehicle and make sure they're completely satisfied with its attributes before signing any purchase papers.

The Acura MDX midsize SUV remains largely unchanged for 2009, receiving only minor updates as Acura turned its attention to other vehicles in its stable. The automaker updated the MDX's navigation and AcuraLink real-time traffic systems for 2009, and made the power rear tailgate a standard feature of both the Technology and Sport trim packages (previously it came only with the Entertainment package). In addition, Acura adds Bali Blue and Mocha Metallic exterior colors for '09.

Now in the third year of a redesign that took place in 2007, the MDX retains its distinctive exterior styling, presenting a sculpted, contemporary look that was inspired by a luxury yacht, according to Acura. The MDX's shield-like pentagonal grille remains controversial, however. Some like the grille's bold look, but others find it out of place and unattractive. Other exterior features include chrome door handles, heated side mirrors, a tailgate spoiler, and a dual-outlet exhaust. The MDX's high, wide stance gives it an aggressive look, while the sloped roofline adds a touch of elegance.

In addition to the base MDX trim, which includes Acura's Super-Handling All-Wheel-Drive (SH-AWD) system, the MDX can be equipped with Technology and Sport packages. Both packages add to or replace standard features with a number of upgrades, including a navigation system, Bluetooth wireless connectivity, and a sport suspension, among other features. 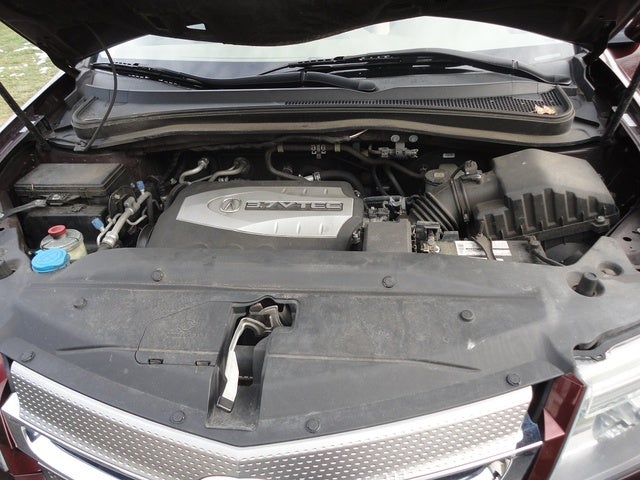 The MDX's 3.7-liter, single-overhead-cam VTEC V6 engine maxes out at 300 hp and 275 lb-ft of torque at 5,000 RPM. Engine features include multipoint fuel injection and a Drive-by-Wire throttle system, which help deliver better performance while ensuring fuel efficiency, according to Acura. The low-emission V6 qualifies for a ULEV-2 rating, which designates it as an eco-friendly vehicle with regard to carbon emissions. The EPA rates gas mileage for the MDX at 15/20 city/highway mpg. Drivers should note the engine requires premium unleaded fuel.

The V6 links to a five-speed automatic transmission with sequential SportShift, which aids in acceleration and fuel economy. The transmission includes a manual mode, so drivers can upshift or downshift as needed. When towing heavy loads, a front-mount transmission fluid cooler ensures optimal performance. The MDX has a 5,000-pound towing capacity.

Working in combination, the V6 engine and transmission provide ample acceleration that builds smoothly and aggressively, impressing both drivers and reviewers. Head to head, the MDX proves more powerful and provides better acceleration than both the Porsche Cayenne and the BMW X5, according to reports. Perhaps best of all, the engine requires no scheduled tune-ups for 100,000+ miles.

The suspension system gets high marks from drivers and reviewers, who like the MDX's sporty yet stable handling. The SH-AWD also gets good marks, especially in hard cornering and aggressive maneuvers, when the suspension and all-wheel-drive system work together to ensure optimal handling and control. Variable power-assist rack-and-pinion steering also helps to improve handling.

The Sport package adds Acura's Active Damper System, which enables drivers to choose between Comfort and Sport suspension modes. The Comfort mode delivers a softer, smoother ride, while the Sport mode provides a firmer ride. Interestingly, some reviewers prefer the base suspension to the more high-tech Comfort and Sport modes. The Active Damper System automatically adjusts the damping force of each shock absorber to improve handling and control, according to Acura.

The MDX seats seven passengers in three rows of seats. The first and second rows provide comfortable seating for long trips, with plenty of legroom and headroom, but adults will find the third-row seat cramped for extended periods of time. Thanks to the driver-oriented cockpit, buttons and controls are easy to access, though some find the dashboard and center console too busy, with too many controls. Interior storage spaces, including 10 beverage holders, front- and rear-door storage compartments, and a center console with a passenger-side storage compartment, provide plenty of spaces to stow
gear.

The MDX clearly aims for a high level of comfort and luxury, with such standard features as dual-level heated front seats, sport seats with leather trim, simulated Koa wood-grain trim, and a power moonroof. Most find the interior spacious for a midsize SUV, with very good fit and finish and an plush, upscale appearance. Some find the interior sedan-like, with the functionality of an SUV.

Other standard interior features for the base MDX include a 10-way power-adjustable driver's seat (eight-way for the passenger), tri-zone automatic climate control, a leather-wrapped multifunction steering wheel, Bluetooth wireless connectivity, and an eight-speaker, 253-watt audio system with an in-dash 6-CD changer, XM satellite radio, and an MP3 input jack.

The Technology package adds further amenities, including a voice-recognition navigation system, a rearview camera, the AcuraLink satellite communication system with real-time traffic updates, a power tailgate, and a 10-speaker, 410-watt, six-channel audio system with a six-disc CD/DVD changer. The Sport package includes all the amenities in the Technology package, plus perforated leather interior trim, auto-leveling xenon high-density headlights, and the adjustable sport suspension. In addition, an Entertainment package is available in conjunction with both of the other packages, and adds a DVD entertainment system and heated second-row seats.

With all three rows of seats in place, the MDX offers a rather paltry 15 cubic feet of storage space. However, that expands to nearly 43 cubic feet with the third row folded flat, and a generous 83.5 cubic feet of space with the second-row folded flat. With all seats folded, the cargo space has a flat load surface, and the cargo area is wide enough to carry 4-foot-wide panels.

The MDX excels in safety tests, achieving a top rating of five stars in front-impact, side-impact, and rollover resistance tests conducted by the National Highway Traffic Safety Administration. In addition, the luxury SUV received a Good rating (the highest possible) in frontal offset, side-impact, and rear-crash protection tests administered by the Insurance Institute for Highway Safety, prompting the IIHS to award the MDX a Top Safety Pick designation.

Safety features for the MDX include dual-stage front airbags, front side airbags, and full-length side curtain airbags activated by a rollover sensor. In addition, the MDX comes equipped with four-wheel antilock brakes with brake assist and a Vehicle Stability Assist system with traction control. A Trailer Stability Assist system provides drivers with additional stability and control when towing a trailer.

Despite all its high-end luxury features and innovative systems, the 2009 Acura MDX receives mixed reviews from owners. Most like its extensive array of standard luxury features, and the SUV's handling and comfort factors are generally praised. But owners have a number of other issues with the MDX, including visibility problems out the back, noisy brakes, mediocre gas mileage, and middling performance. Some drivers also note odd sounds coming from the brakes. In addition, owners generally agree with reviewers that the optional Active Damper System, which comes standard with the Sport package, can provide a harsh ride when in Sport mode. However, the SH-AWD system gets good marks from owners.

CarGurus owners also like the MDX's handling, comfort, and extensive list of standard features, although most would like to see better fuel economy. In addition, CarGurus owners cite a tight third-row seat, and some take issue with the shield-like front grille. CarGurus owners give good marks to the SUV's acceleration, but some note odd engine sounds when the vehicle accelerates. Overall, CarGurus owners consider the MDX a good value, despite of its flaws.

TV1976 Will never buy an Acura again. My wife wanted a mid-size SUV that had a 3rd row seat. Against my better judgement she purchased the 2009 MDX. The first problem was the carpet - it was cut poorly so it didn't fit properly. Dealer suggestion- get a screw driver and force it back under trim. If I did that when needed it would be an every day task. Second problem, again poor workmanship, is the leather covering the center console was cut small and came loose after a couple of weeks. Nothing the dealer could do...for a supposed high-end luxury vehicle the MDX the quality is sub-par. The other issue deals with cost for service. I own a Lexus and the cost for maintenance is much more palatable. Beyond being overpriced, the service is slow and the customer service is mediocre. An oil change, scheduled in advance can take 2 hours. My recommendation, buy this brand only if there are no other dealers in town. Never liked the Honda product and this MDX showed me why.

Users ranked 2009 Acura MDX against other cars which they drove/owned. Each ranking was based on 9 categories. Here is the summary of top rankings.

Have you driven a 2009 Acura MDX?
Rank This Car

Engine overheated. Towed and replaced radiator which was cracked. The screws to the air condition unit were all rusted perhaps the cause of the leakage does this car have the ability to shut the mot...

Will Driving A Car For Only 5minutes A Day Hurt It

Why Can't I Search More Than 100 Miles Around ?