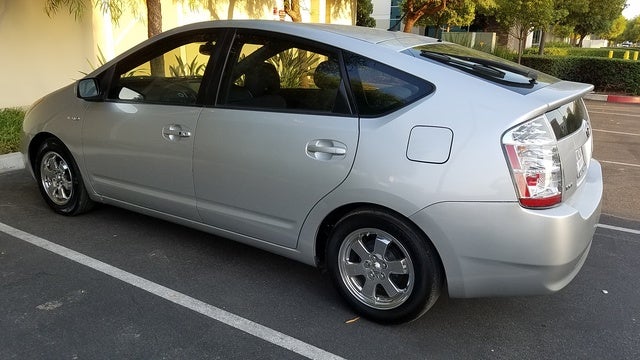 With gas prices seeming to rise every hour, the roomy 2008 Toyota Prius offers the best relief for one's wallet, using its dual-hybrid system to achieve mileage ratings in the high 40s.

Proving it's hard to save on gas and cut a powerful path on the highway, the underpowered 2008 Prius suffers noticeably in the acceleration department, and the jury's still out on the futuristic styling of this roomy hatchback. 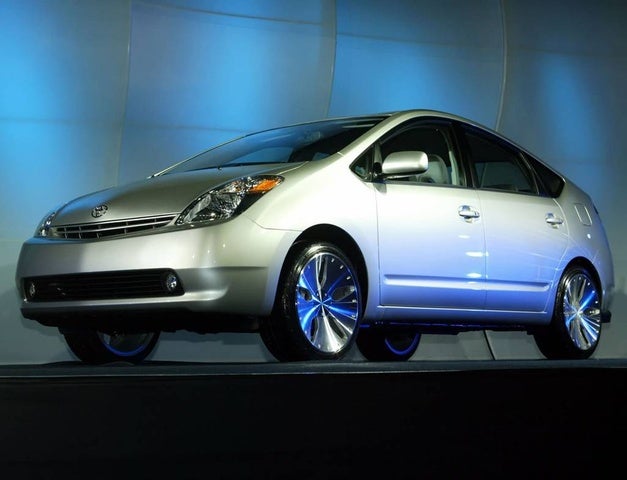 You can't argue with the numbers. Outstanding fuel economy and an environmentally friendly engine, combined with a functionally spacious interior, satisfy both eco- and wallet-conscious drivers and far outshadow the drawbacks of the underpowered drivetrain in the 2008 Toyota Prius for many. Whether the actual fuel savings in dollars justifies this still-pricey hybrid has yet to be determined, but that seems less of a sticking point as gas prices continue to skyrocket.

The top-selling and best known hybrid on the market, the Toyota Prius returns virtually unchanged for 2008, except for a spike in popularity that's sure to continue rising as fast as gas prices. Resembling an overstuffed tick in its unique bulbous shape, the front-wheel-drive sedan/hatchback seats four and offers as much interior space as the Toyota Camry, making the Prius a practical car for singles and families alike.

The Prius was not built for driving enthusiasts, but rather those seeking to reduce their carbon footprint and save a few dollars at the gas pump. Its dual-mode hybrid maximizes fuel economy and reduces emissions (qualifying it as a Super Ultra Low Emission Vehicle), so drivers can feel they're doing their part for the environment without sacrificing the reliability and performance associated with the Toyota name.

The '08 Prius comes in three trims. This year it adds a new Standard trim, slotted just below the Base and Touring. This new trim is essentially the Base minus cruise control and heated mirrors. The Touring offers a slightly sportier ride, boasting a stiffer sports suspension and larger wheels. 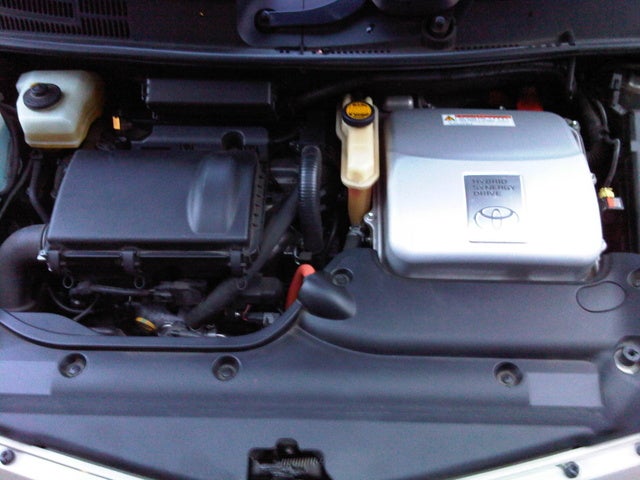 The hybrid's power plant consists of a 1.5-liter DOHC inline four combined with two electric motors (MG1 and MG2). The MG1 powers the front wheels, while the MG2 delivers acceleration power, restarts the engine after cutoff, and recharges the NiMH battery. The hybrid system features regenerative braking and engine cutoff while idling or decelerating, with the battery pack continuing to run the climate control, radio, and power features.

The full hybrid system means the Prius can operate on gas or electric power alone or both in combination, depending on which configuration achieves optimal fuel economy. Alone, the gas engine delivers 76 hp and 82 ft-lbs of torque at 4,200 RPM, while the electric motors put out 67 hp and 295 ft-lbs at 1,200 RPM. Together, the engine and motors deliver 110 hp. Fuel savings can be monitored by the driver on a vivid but somewhat distracting LCD display.

Although its 0-60 times hover around 10.5 seconds, the selling point here is the Prius's 48/45 city/highway mileage and partial zero emissions status. The engine works in conjunction with what Toyota calls an ECVT, or electronic continuously variable transmission. While ordinary CVTs feature a large number of gear ratios so automatic shifting feels seamless and smooth, the ECVT is unique in that it has only one fixed-gear ratio and utilizes the two electric motors and engine to accelerate. This increases fuel economy and virtually eliminates the grind and whine often heard when shifting gears, providing a much quieter overall ride. 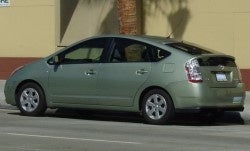 Don't expect to win any races with the '08 Prius, as the focus here is on fuel efficiency and environmentally friendly performance. It's hard to complain about a car that gives you such great gas mileage, with city ratings exceeding those on the highway. How does that happen? In the city, the electric motor kicks in more often and is constantly recharging the battery due to frequent stops and braking. Because drivers brake much less frequently on the highway, the battery loses its charge much quicker, forcing the gas engine to do most of the work, reducing overall miles per gallon.

Despite its rounded profile and high beltline, the Prius maneuvers remarkably well, with minimal body lean and a surprisingly tight turning radius. Standard and Base trims ride on 15-inch alloy wheels with all-season tires, while the Touring gets 16-inchers. The Touring's sport suspension offers even more confident road grip when cornering.

Due to the lack of a traditional gear set, the interior remains quiet even during highway driving, and drivers often fail to notice any power transition between the electric motor and gas engine. In fact, sometimes the only way to determine this is by looking at the informative LCD screen which diagrams the flow of energy in the whole system. 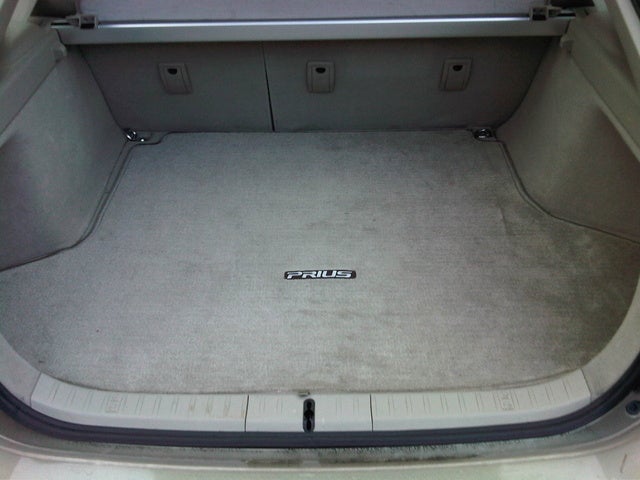 With nearly 42 inches of front legroom and 38.6 of rear legroom, four adult passengers can ride comfortably in the 2008 Prius. However, passengers over 6 feet tall may find the sloped rear roof line somewhat cramped. Front seats feature 4-way power adjustment, but lack any lumbar settings. Many functions located on the wheel-mounted controls can also be accessed via a touchscreen device. Drivers and reviewers alike feel this system is overly complex and also unfortunately attracts fingerprint smudges that obscure visibility.

Dash ergonomics remain generally well laid out, with the added driver convenience of eleven wheel-mounted controls for various functions, such as audio, cruise, and climate. While the wide and steeply sloped windshield provides an expansive view out front, the equally raked rear window severely cuts down on visibility out the back, motivating many drivers to spring for the optional rearview camera.

In addition to the roomy interior, the '09 Prius offers a 14.4-cubic-foot trunk, accessible via the 60/40 split-folding rear seats as well as the hatch. Unlike those in some other hybrid sedans, these seats fold flat. A rear armrest flips up to make room for a fifth passenger, though that person should be prepared to ride on a slight hump. Plenty of storage is provided in under-floor compartments, a double glovebox, and a center storage console.

Taking advantage of its full hybrid status, the '08 Prius powers its climate system solely from the electric motor. This helps avoid a noticeable comfort detractor found in gas-powered cars: the tendency for air-conditioning to weaken as the engine idles. The Prius's system delivers the best of both worlds, as it improves passenger comfort while simultaneously increasing energy efficiency and reducing harmful emissions.

While not a luxury car, the '08 Prius comes well equipped with a long list of standard features you'd expect at such a high price point. Power locks, windows, and mirrors, a CD player, push-button start, and Bluetooth capability are standard across the lineup. Moving to the Base trim adds a rear spoiler, cruise control, and heated mirrors. The Touring dresses up the exterior with foglights and xenon HID headlights. Leather upholstery is an after-market option, and other extras include a 6-CD changer with MP3 jack, a voice-activated navigation system, and a smart key.

Continuing Toyota's reputation for safety, the 2008 Prius features a nice complement of safety equipment. Front disc and rear drum brakes are supplemented by 4-wheel ABS and electronic brakeforce distribution. Dual front-side airbags come with passenger deactivation, and side curtain airbags are standard in the front and rear. Traction control is also standard, with the option to add stability control. Various option packages add a navigation system, auto-dimming mirrors, and a rearview camera to help mitigate the poor rear visibility caused by the upward-facing rear window. Overall, the '08 Prius earns four stars in all crash tests conducted by the NHTSA and a Good rating from the Insurance Institute. 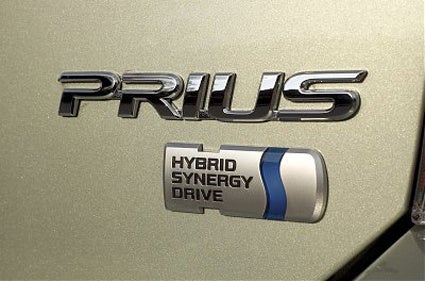 There's no question that the Prius's fuel economy remains its number one selling point, and user reviews on CarGurus and elsewhere report mileage numbers well into the 50s. CarGurus reviewers also complement its quiet ride, easy maneuverability, and extensive interior space and cargo room. These sentiments are echoed on other sites, where drivers also rave about the convenience of the optional smart key feature and rearview camera.

Downsides include the lack of acceleration power and the absence of any lumbar support in the front seats. Many reviewers complain about a seemingly minor but incredibly annoying chime that sounds when backing up in the Prius.

hdman69 My 2008 Prius is solid,quiet,roomy,economical and fun to drive. I am very content with it.

Have you driven a 2008 Toyota Prius?
Rank This Car

How Much Is Replacement Of A High-voltage Hybrid Battery?

How much does the replacement of a high-voltage hybrid battery add to the resale value of a 2008 Prius Touring model?

Why Is Gas Gauge Not Working?

The gas gauge on my 2008 does not seem to be working. I have gone 70 miles and it still show full. Have had issues since replacing battery.

How Much Does It Cost?

I have a 2008 Prius. The red triangle of death is on along with the VSC, check engine, and orange circle in brackets with exclamation point. It drives fine for the first ten minutes, then loses Ac...

Brake Lights Not Working Unless Brake Pedal Is Pressed

I have a 2008 Prius and I have a small safety concern. My tail lights are not illuminated at all unless the brake pedal is pressed, even when my lights are on. They used to work just fine, so I am ...