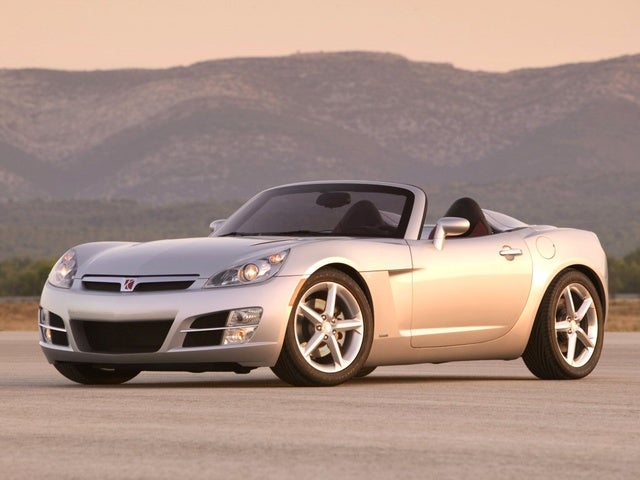 The 2008 Saturn Sky is a jazzy, sporty convertible with an affordable sticker price. Seems like the folks at Saturn might have been inspired by the 1990s success of the Mazda Miata: The 2008 Sky has the same funky styling, low price point, and (dare I say it?) slightly underpowered engine of that iconic sports legend.

The good news about the Sky's inline-4 engines is that they're great on gas, with EPA estimates of 20-22 mpg city, 28-31 mpg highway. The Red Line engine, a 2.0-liter turbo plant, clocks at 260 horsepower; the Roadster engine is a 2.4-liter mill with a 177-horsepower output. Still, with a curb weight under 3,000 pounds, that may feel like enough oomph for most drivers.

Disc brakes, rack-and-pinion steering, and a low-slung, curvy exterior give the '08 Saturn Sky a racetrack feel. Both trims ship with manual transmissions, but a 5-speed automatic is an option on the Roadster.

It's still hard to characterize the Roadster and Red Line trims on the 2008 Sky; the trim identities haven't quite gelled in this, the model's second year. The Red Line seems focused more on performance, and the Roadster on style, but Saturn's marketing doesn't quite differentiate them. Nonetheless, the 2008 Saturn Sky looks like a lot of fun for your dollar.

Pegasus134 Is the sky flat towable

Philip Yes on a flat trailer.

Users ranked 2008 Saturn Sky against other cars which they drove/owned. Each ranking was based on 9 categories. Here is the summary of top rankings.

Have you driven a 2008 Saturn Sky?
Rank This Car

My 2008 Saturn Redline Sky is. stuck in my garage with a dead battery. Is there a way to get the car in neutral without the car being started?

How Much Value Will A Collectors Edition Add To A Car?

I have the original 2008 Boston Marathon pace car. Brand new custom paint job and pioneer sound system with Bluetooth and back up camera.

What are things you can check when the engine light comes on.

How Many Years Did Saturn Make The Sky Roadster Before Going Out Of Busines...

Looking at buying a 2008 Saturn Sky Red Line I've found. Just curious how many years this model was made - Or the Saturn Sky Roadster body in general? Is there a source where a person can find a lot...

How Many Were Made With Automatic

How many were produced