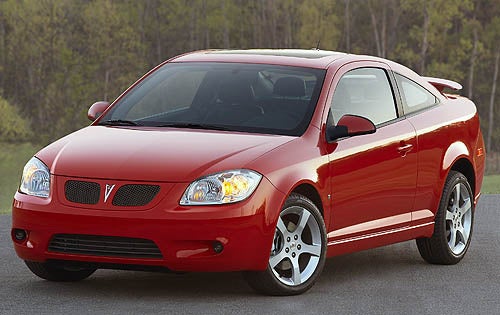 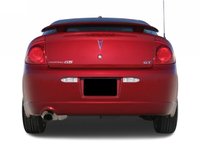 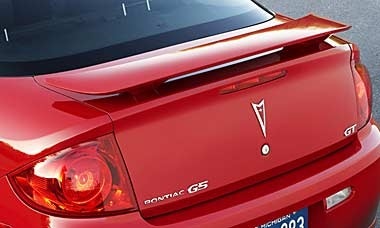 The 2008 Pontiac G5, the second year for this model, carries over largely unchanged from 2007. Still available only as a coupe, the '08 G5 is designed to provide basic subcompact economy transportation with a slightly sporty feel.

Available in two trims, a base model and the sportier GT, the 2008 G5 is a bit more stylish than many of its competitors at the low end of the price curve. Its inline-4 engine choices (a 2.4-liter, 148-horsepower plant on the base model, and a 2.4-liter, dual-overhead-cam, 177-horsepower mill on the GT) aren't anything to write home about; still, they do provide enough power to get the '08 G5 around the highways, considering its less than 3,000 pounds of curb weight.

The '08 Pontiac G5 is marketed as a family coupe; it seats five passengers, but the back seat would definitely be a tight squeeze for adults or growing teenagers. On the other hand, the G5, like its Pontiac Sunfire predecessor, might appeal to bargain-hunting buyers looking for their first new car.

The G5 is pretty solid on fuel economy, too, with EPA estimated mileage of 25 mpg city/34 mpg highway. Like its competitors (the Chevrolet Cobalt, Chrysler Sebring, Nissan Altima, and others) the G5 isn't meant to be a muscle car, but a low-priced, reliable little car that thinks outside the econobox.

All Of A Sudden My Front Speaker Wont Work As Well As My Directional Clicki...

It's seem that all the things that make noise, directional clicker, front "only" speakers, door lock dinger.........stopped making noise ?

637 views with 4 answers (last answer about a year ago)

I have an 08 pontiac g5 I had shaking really bad at certain speeds then was told it was my axles so had them changed. Now after that the shaking is worse had it aligned also.

I have a 2008 Pontiac G5 and the other day I was driving down the road and the MPH and RPM gauge maxed out and fell to zero. I parked the car and the next day I went to start it and it wont start. Any...

My g5 wont start , Battery isn't a problem. Power locks haven't worked in a while and now nothing happens when I turn the key on.