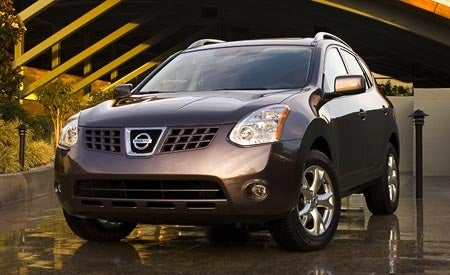 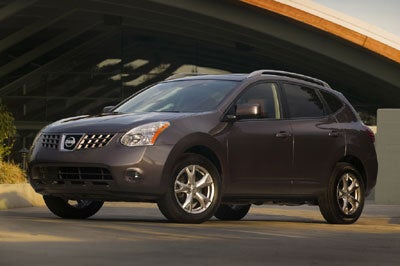 With its launch of the 2008 Rogue, Nissan finally makes its entry into the crossover utility vehicle market. Crossovers are hot right now, as buyers flock to the sporty little models that offer the roomy flexibility of an SUV with the fuel efficiency of a car. Competing with well-established models like the Toyota RAV4 and Honda's CR-V, the 2008 Nissan Rogue needs a lot of pizazz to make a splash.

According to most reviewers, the '08 Nissan Rogue definitely has what it takes. Based on the Japanese maker's C platform (best known as the base for the popular Nissan Sentra), the '08 Rogue is targeted at younger buyers, from its name to its styling to its high-end Bose sound system. The compact utility vehicle offers an independent suspension, stability and traction control, and antilock disc brakes as standard features.

Two trim levels are offered for the 2008 Rogue: the entry-level S and the more luxurious SL. Each is available with front- or all-wheel drive, though the Rogue's light weight and relatively low profile don't make it a natural for off-road use.

Under the hood, you'll find a 2.5-liter four-cylinder engine, with an output of 170 horsepower and 175 ft-lbs of torque. That's plenty of power for a relatively lightweight vehicle like the Rogue; thanks to a continuously variable automatic transmission, it has plenty of power for hills. Reviewers praise the Rogue's oomph and quick acceleration; only time will tell if buyers zip into Nissan showrooms for this cute little CUV.

Users ranked 2008 Nissan Rogue against other cars which they drove/owned. Each ranking was based on 9 categories. Here is the summary of top rankings.

Have you driven a 2008 Nissan Rogue?
Rank This Car

Why Does My Air Get Blocked When I Get On The Highway?

My condition runs pretty well through out the day. But when I get on the highway for a trip, it’s like it cuts off. But the things it doesn’t completely shut off. When you turn the radio off it sou...

27 views with 3 answers (last answer about a month ago)

My Ac Isn't Working, Could It Be The Condenser?

My dad filled the freon and when I first start the car it blows cold and when I'm going slow, under 30, it also blows cold. As I speed up, it gets warmer and if it's warm from sitting in the sun whe...

My Nissan Rogue Will Accelerate But Has Now Power And RPm Go Up Really High...

735 views with 3 answers (last answer about a year ago)

Can I Get A Trade In Without A Title?