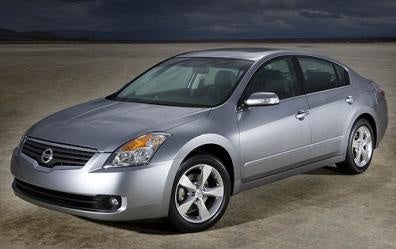 Introduced in 2007, the Nissan Altima Hybrid changes little for 2008. The eco-friendly sedan features a sleek, sporty exterior design and a front-wheel-drive configuration. Under the ho... Read More
Introduced in 2007, the Nissan Altima Hybrid changes little for 2008. The eco-friendly sedan features a sleek, sporty exterior design and a front-wheel-drive configuration. Under the hood, Nissan again drops its well-tested, highly rated Hybrid Energy System, licensed from Toyota. The powerplant consists of a 158-hp, 2.5-liter four-cylinder gas engine coupled to a permanent-magnet AC synchronous electric motor that produces up to 40 hp, bringing the system's total horsepower to 198.
The electric motor has enough low-end torque to move the Altima Hybrid from a standing start. Once up to cruising speed, the gas engine takes over as the electric motor shuts down, but it kicks in under heavy acceleration, such as during a passing maneuver. When braking or coasting, the gas engine shuts down to conserve fuel.
Regenerative brakes recharge the 245-volt nickel-metal hydride battery with kinetic energy that otherwise would be wasted, converting it to electricity, so there's no need to plug in the vehicle. The Hybrid’s only available transmission, a CVT unit called eCVT, works with the master control system to determine the proper power outputs. The Altima Hybrid posts fuel economy numbers of 35/33 mpg, comparable to the Toyota Camry Hybrid's 34/34 mpg rating.
The driver can monitor the hybrid system by viewing the power meter on the instrument panel, which indicates when the car is running solely on electric power, when it's generating electricity, and how much energy remains in the system. In addition, an available navigation system displays a real-time image of the hybrid system at work.
The 2008 Altima Hybrid comes equipped with such standard features as remote keyless entry, dual-zone automatic climate control, power windows and door locks, Nissan's push-button ignition system, and an AM/FM/CD audio system. Options, such as Bluetooth wireless connectivity, leather-appointed seats, and a leather-wrapped shift knob, can quickly push up the car's cost, though. Outside, standard features include chrome-tipped dual exhaust pipes and exterior mirrors with integrated turn signals. The Altima Hybrid rides on 16-inch wheels and includes four-wheel antilock brakes, traction control, and advanced airbags.
The hybrid engine provides good acceleration and a spirited ride, according to drivers and reviewers, who are pleasantly surprised by the sedan's performance. In fact, many consider the Altima Hybrid a better performer than the Camry Hybrid, with more agile handling and a firmer ride. For 2008, the Altima Hybrid is available only in certain states, including California, Connecticut, Maine, Massachusetts, New Jersey, New York, Oregon, Rhode Island, and Vermont.
Collapse
3.5 SL
Reviews (2)
Pictures (111)
Pricing
Adds to 2.5: