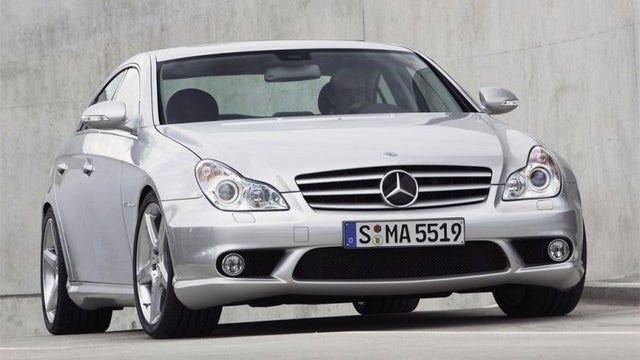 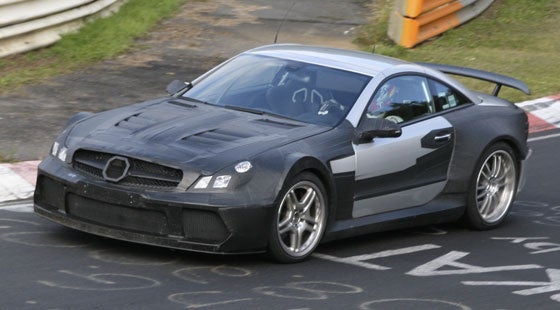 Following a design refresh in 2007, the Mercedes-Benz SL-Class receives only a couple of minor updates for 2008. The SL-Class two-seat roadster has a long history, dating back to the mid-1950s, and remains one of the automaker's most popular and coveted vehicles. For 2008, the SL-Class consists of four trims, including the SL550, the SL600, the SL55 AMG, and the SL65 AMG. The SL550 receives a new 18-inch wheel design this year. In addition, Mercedes adds premium Nappa leather to the optional Trim Package for the SL550 for '08.

The SL-Class displays a low, sleek profile, with an elongated hood and a two-piece retractable hardtop, which folds down in just 16 seconds and stows in the 10.2-cubic-foot trunk, reducing cargo space to 7.2 cubic feet. The SL-Class's prominent nose, with the Mercedes-Benz three-point star firmly planted in the center of the grille, features a low front apron flanked by dual foglights. Hunky 18-inch and 19-inch wheels give the SL-Class an aggressive appearance.

A range of powerplants, including both V8 and V12 engines, drive the SL-Class roadsters to impressive levels of performance. The SL550 jumps out from 0 to 60 in 5.3 seconds, thanks to its 5.5-liter V8 engine, which generates 382 hp and 391 lb-ft of torque. The engine links to a seven-speed automatic transmission with the Touch Shift manual shift feature, and posts fuel economy numbers of 13/21 mpg.

For the SL600 roadster, a 510-hp, 5.5-liter V12 bi-turbo engine provides exhilarating power. The V12 generates an impressive 612 lb-ft of torque, and drives the roadster from 0 to 60 in 4.4 seconds. It links to a five-speed automatic transmission specially designed to handle the increased torque. Paddle shifters mounted on the steering wheel enable drivers to shift manually. The V12 posts fuel economy numbers of 11/18, according to EPA estimates.

At the top of the line, the limited-production AMG-tuned SL55 AMG and SL65 AMG roadsters come equipped with hand-built engines. The SL55 AMG sports a supercharged 510-hp, 5.5-liter V8, while the SL65 AMG houses a hefty bi-turbo 6.0-liter V12 generating 604 hp and an eye-popping 738 lb-ft of torque, making it one of the most powerful convertibles available today. The V12 propels the SL65 AMG from 0 to 60 in 4.2 seconds. Like the V12-powered S600, the SL65 comes equipped with a five-speed manual transmission designed to channel all that torque and direct it to the rear wheels. The SL65 posts fuel economy numbers of 11/18.

The SL-Class delivers exceptional sports-car handling, thanks to such features as Active Body Control, which adjusts the suspension at each wheel to reduce vibration, dive, and squat, and uses a series of sensors and high-pressure hydraulics to minimize body roll during cornering. The AMG versions come equipped with tighter suspensions performance-tuned by technicians at the AMG shop in Germany.

Standard safety features include side-impact head/thorax airbags, which protect the heads and upper bodies of occupants, and a driver's-side knee bag. Antilock brakes, traction control, an electronic stability system, and brake assist also come standard. The SL600 includes the Parktronic parking-assist system, while options for the SL-Class include the Distronic Adaptive Cruise Control system, which monitors the vehicle ahead and adjusts the speed of the vehicle to maintain a pre-set following distance.

What's your take on the 2008 Mercedes-Benz SL-Class?

Have you driven a 2008 Mercedes-Benz SL-Class?
Rank This Car

Report Poor Conduct From A Buyer

Some buyer named "Merick" made an offer on a vehicle I've listed, and I accepted contingent on his inspection and test driving the vehicle. Then he just disappeared, ghosting me as if this were a d...

Repair Showing Up As An Accident On Vehicle History

I had a piece of tire re-thread come off an 18 wheeler and break my fog light and damage the grille of my sl550 MB. I reported to my insurance and it was all repaired. Now it is showing up as an acc...

Why Can I Not Receive Sirius XM Ststions?

I have a Sirius subscription and can only receive a few stations, I put in a station, it tells me "Not subscribed". I know it is as I have 2 other vehicles on same plan. What seems to be the problem...

3 views with no answers yet
90

Mercedes Benz SL550 Computer Thinks The Trunk Is Open But Its Closed.

Additionally, when I remotely lock the car I don't get the double beep.