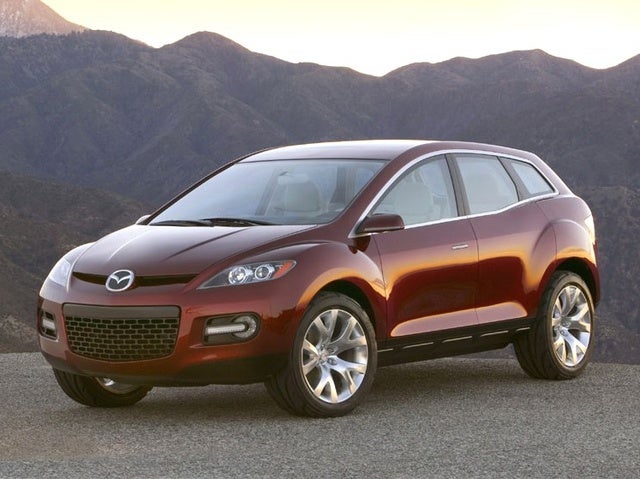 The Mazda CX-7 crossover SUV debuted in 2007 and receives no significant changes for 2008. Built from an all-new platform, the CX is the next phase in Mazda's "zoom-zoom" campaign of reasonably priced and fun-to-drive vehicles.

The CX-7 embodies the Japanese automaker's continued pursuit to blend all the desirable SUV conveniences with the pleasant road manners of a performance sedan. It competes most directly with the Toyota RAV4, Nissan Rogue, and Honda CR-V. However, the CX-7 is geared more toward performance, perhaps at the expense of crossover SUV utility. The CX-7 is a class leader in terms of handling, acceleration, and overall ride quality, but its interior does not offer the same flexibility as its comparably priced competitors. The Mazda crossover has also earned praise for its bold exterior, sleek cabin design, and durable build. However, its fuel efficiency falls a bit short of expectations for a small four-cylinder SUV.

There are six CX-7 variants for 2008: three trim levels, each available with two- or all-wheel drive. The entry-level trim is the Sport, followed by the Touring, and the top-shelf Grand Touring. All three trims come standard with 18-inch alloy wheels, air-conditioning, full power accessories, cruise control, a six-way power driver seat and a CD player. Options include a sunroof and a premium Bose audio system. Standard safety items include stability control, front side airbags, ABS, and full-length side curtain airbags.

All CX-7s are powered by the same 2.3-liter direct-injection turbocharged four-cylinder power plant, which generates 244 horsepower and 258 pound-feet of torque. This small but potent engine is teamed with a six-speed automatic transmission. The CX-7 zips from 0 to 60 mph in just 7.7 seconds, but that apparent engine power does not translate to towing ability; the CX-7's maximum towing capacity is just 2,000 pounds. When equipped with AWD, the CX-7 gets fuel-economy estimates of 16/22 mpg city/highway. While the four cylinder is plenty powerful for spirited highway driving, reviewers warn that this mill is not quite as smooth as some competitors' V6s, and it exhibits some turbo lag at higher speeds.

Marybert What does the symbol on the dashboard mean

Check engine light came on in my 2008 Mazda cx7, 4 cylinder 2.3L turbo GDI,had it read. Missfire in cylinder 2 code came up. I changed spark plugs it went away, but then came back on , same code. ...

One Found behind the guide of the timing chain. The other was found on the oil pan.

My Car Ran Out Of Oil An The Engine Shut Off

Heat Shield Between Body Of Car & The Catalytic Converter

can I drive safely before getting replacement heat shield

Broken Timing Belt,how Much Are The Repairs?