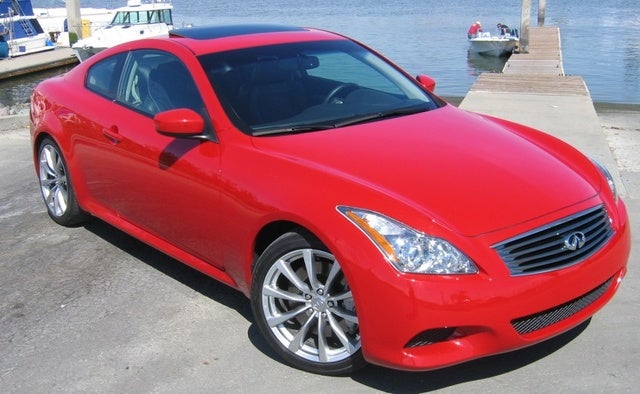 The new wedge-shaped G37 sport coupe is Infiniti's answer to such high-performance vehicles as the Audi TT roadster, the Jaguar XK, and the BMW 335i. It all starts with the G37's aerodynamic shape, low stance, swept-back roofline, and sculpted hood that's deeply curved where the hood meets the front fenders.

The 2008 G37 borrows many of its elements from the G35, which it replaces, although it updates such components as the suspension and the engine. Under its hood, the G37 packs a 330-horsepower, 3.7-liter, VVEL (Variable Valve Event and Lift) V6 engine, designed to produce a rush of acceleration. The VVEL technology not only tunes the engine continually for optimal performance, but also provides improved fuel efficiency and lower carbon-dioxide emissions.

The G37 features four-wheel Active Steer, which means that all wheels turn as you steer. This helps improve handling, especially during hard cornering.

Other features such as a five-speed automatic with magnesium steering-wheel-mounted paddle shifters, 14-inch brake disks, Washi-finish aluminum interior trim, and a leather-trimmed 14-way-adjustable driver's sport seat make this a cutting-edge vehicle both inside and out.

The 2008 G37 is also equipped with an 11-speaker, Bose-designed Infiniti Studio on Wheels stereo system and massive 19-inch wheels.

Users ranked 2008 INFINITI G37 against other cars which they drove/owned. Each ranking was based on 9 categories. Here is the summary of top rankings.

Car Keeps Dying On Me And Can't Find The Problem!!!

So I gotta 2008 G37 and well it keeps bringing up my crankshaft sensor and camshaft sensors and I have literally changed those 3 times now and my car still has the same problem. I will be driving i...

Do You Ship Vehicles

Knock Or Raddle Sound Coming From Under The Car

I have a 08 Infiniti g37 coupe. When I come to a complete stop every blue moon, and I accelerate I then here some type of knock or raddle coming from under the car. I had the rear exhaust replace a mo...

I Wanted To See If I Could Do Payments With One Of Your Cars I’ve Seen?

My Car Stopped Accelerating While On Highway

I was driving home from vacation. While an hour into my travel and at 80mph; my car all of a sudden stopped accelerating. Once I pulled over and tried to take off again, it would sputter as if it ...