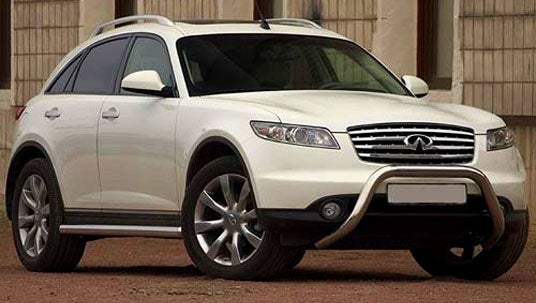 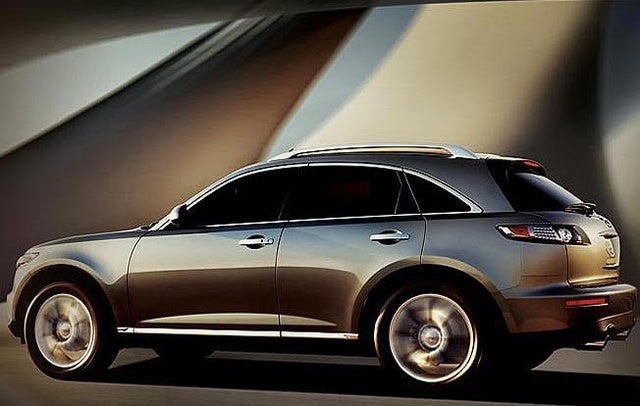 The high-performance version of Infiniti's popular crossover SUV, the 2008 FX45 remains essentially unchanged from previous years, with the exception of a few new standard features, such as XM satellite radio, and some updated interior and exterior colors. The all-wheel-drive FX45 is a step up from its cousin, the FX35, thanks to its 4.5-liter V8 engine that produces 320 horsepower. A super-wide-ratio five-speed automatic transmission with a manual shift mode feature is standard.

The FX45 rides smoothly on 20-inch wheels and features front midship engine placement, which positions the engine behind the front axle but in front of the passenger cabin to provide excellent balance and handling.

Design-wise, the FX45 changes little for 2008. It's still one of the most distinctive vehicles on the road, with its mash-up of SUV and sports car design features. The passenger canopy, positioned behind the long, stylish hood, gives the vehicle a sports car-like appearance. Inside is a roomy, sport-inspired cockpit with a contoured, bolstered driver's seat, a tilt steering wheel that moves the gauges also to ensure a clear view of the road, and memory settings for the driver's seat, steering wheel, and exterior mirrors.

This being a high-end Infiniti, the FX45 comes standard with many of the automaker's most cutting-edge features, including the Infiniti Intelligent Key, a wireless Bluetooth hands-free phone system, interior rosewood trim, a power sliding tinted glass moonroof, a sport-tuned suspension, and a 300-watt, 11-speaker Bose audio system.

Options include a RearView Monitor, an Infiniti Mobile DVD Entertainment system, and the Infiniti Controller system for controlling the audio, navigation, and audio systems.