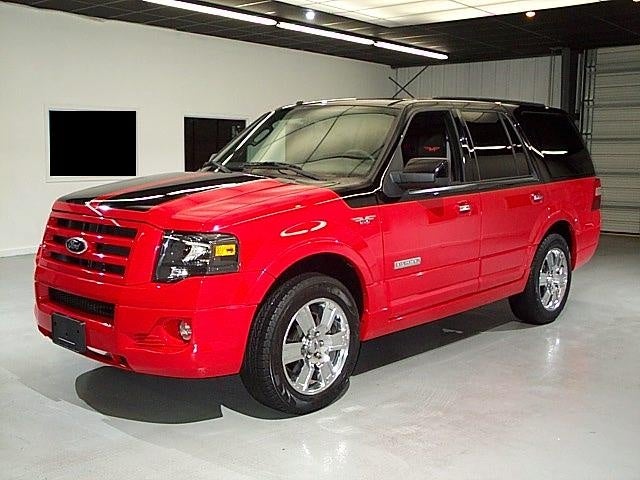 Available in no fewer than 16 different trim packages for 2008, the full-size Ford Expedition SUV offers drivers just about anything they could ask for, including four-wheel-drive models, extended versions like the XLT EL, upscale Eddie Bauer editions, and rugged luxury versions like the King Ranch, which is a new trim for 2008. The Expedition also offers tons of cargo and passenger space and a number of safety features, such as AdvanceTrac traction control with Roll Stability Control (RSC), which is standard across the line.

What the Expedition doesn't offer, of course, is fuel economy and ease of parking. However, drivers and reviewers note that the latter issue is offset by the fact that the Expedition handles well and is fairly nimble and responsive for a vehicle its size, which is one of the reasons it remains popular in today's tight fuel economy.

The eight-passenger Expedition also offers a number of features that enable drivers to easily reconfigure the interior seating space, such as second row seating with CenterSlide, which allows the center section to slide forward up to 11 inches so parents can easily reach small children in the second row. Ford also made reclining and fold-flat seats part of the package, as well as split bench seating.

After giving the Expedition a complete redesign in 2007, Ford made only a few minor changes to the SUV for 2008. All models now feature a keyless entry pad as well as a full overhead console. Beyond that, standard features and options are varied and can be extensive, depending on the trim package.

All versions of the 2008 Expedition come with a standard 5.3-liter, single-overhead-cam Triton V8 engine that generates 300 horsepower and provides plenty of low-end torque, giving the Expedition the power it needs for tooling around town or towing a boat or trailer. The engine links to a six-speed overdrive transmission.

What's your take on the 2008 Ford Expedition?

Tony I love my expedition the look and drive are awsome the cargo space is just what I needed great vehicle.

Users ranked 2008 Ford Expedition against other cars which they drove/owned. Each ranking was based on 9 categories. Here is the summary of top rankings.

Have you driven a 2008 Ford Expedition?
Rank This Car

What Is The Fuel Pressure For A 5.4 L Ford Expedition Engine

I have a 2008 Ford Expedition and I am having problems with the engine after changing the spark plugs and fuel filter, I think the fuel pressure is too high, 60 before start and above 70 engine runnin...

No Crank No Start Not Where Else To Chec

New battery, New ignition switch, relays and fuses good, no start while in neutral or any other gear (no reverse lights either in reverse) could my problem be the nuetral safety switch?

People Smarter Than Me: My heat comes and goes. Hot in back consistently. Comes up to set temp when I put car in neutral and keep at 3000 rpm. I did this to see if I had heater core issue. Che...

Why Is My 2008 Ford Expedition Overflowing With Fuel When Filling Up?

when filling at the pump, the pump doesn't shut off when the tank is full...instead it overflows and makes a mess

Why Is The Knocking Noise Still There After Replacing The Actuater

replaced the actuator in the rear of my 2008 ford expedition because of the knocking noise and it still knocks and blowing warm air out of rear vents but the front vents are alot better, so what cou...