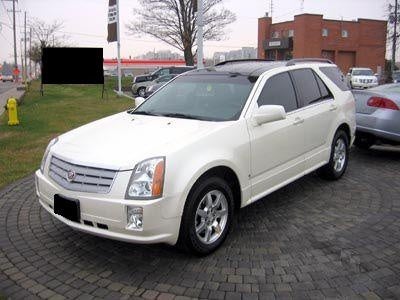 In the midsize luxury crossover SUV class, the Cadillac SRX ranks near the top. It's so good that some reviewers claim the SRX stands in the middle ground between SUV and sport station wagon. After receiving a complete interior makeover for 2007, the 2008 model shows few changes.

The SRX's so-called "art school," angular styling reflects the overall panache of Cadillac's CTS, STS, and XLR lineup. But underneath lies the heart of the CTS and STS: the Sigma platform, which provides a solid, flex-free foundation. Also featuring a lower center of gravity than most SUVs, a close-to-perfect front/rear weight balance, and the optional Magnetic Ride Control adaptive suspension, the SRX handles more like a sports sedan than any SUV on this planet. Reviewers also praise the response and feel of the steering and brakes. One reviewer even compared the SRX's handling to that of the smaller Infiniti FX. It's also quite competent in ice and snow, bested only by the Volvo XC90 in those conditions.

Providing even more joy for reviewers was the Northstar 4.6-liter V8, which generates 320 hp, can jump from 0-60 mph in 6.2 seconds (6.9 with all-wheel drive), and tow 4,250 pounds. The V6, the other solid choice with 255 hp, can do the 0-60 routine in the low seven-second bracket and is good for towing up to 2,000 pounds. Both engines feature electronic throttle control and four overhead cams with fully variable valve timing. Gas mileage for the rear-drive V6 is 15/22 mpg city/highway, with the V8 getting a couple of mpg less - about midrange for this vehicle segment.

The interior also receives high praise. Supple leather complements tasteful wood and alloy trims, though a few plastic bits sneak in. The SRX seats five comfortably and offers a third row to seat seven, but that last row is a bit cramped. Yet at the push of a button it folds flat into the floor, and with the second row also banished into the floor, 70 cubic feet of cargo space materializes.

fsturner Our 2008 SRX was a thought out purchase that evolved over the course of 4 months. Lots of research into pros and cons before purchasing. Finding a SRX that fit my budget and mileage requirements took some time. Our SRX is comfortable all the time. Mileage is about the same as the Mitsubishi Endeavor it replaced. All the bells and whistles are always nice to have. We LOVE this vehicle and plan to have it for many years,

Have you driven a 2008 Cadillac SRX?
Rank This Car

I Need To Remove The Door?

Removal of the whole door not the panel

I have a 2008 Cadillac SRX that won't start. Jumped it a month ago went and bought a brand-new battery worked fine for the last month Saturday it was dead so we jumped it again and it ran into tod...

What does salvage history mean?

How Is The Interior Space?

I am kind of big. is it worth looking at?