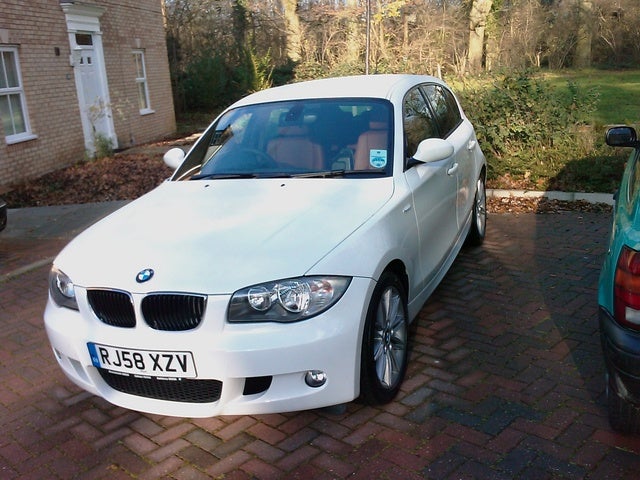 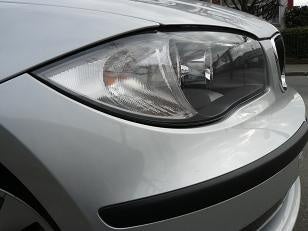 Setting a new standard for entry-level performance cars, the BMW 1-Series enters the U.S. market for 2008 with three available trims, including two sedans and a convertible. A small, rear-wheel-drive car that packs a lot of power under its hood, the 1-Series projects a sleek, muscular apparance while maintaining its distinctive BMW design. It also incorporates all the latest BMW technologies, from brakes to transmissions, suspension to safety features, and offers a sporty interior, with well-thought-out controls, carefully designed ergonomics, and all the latest gear and gadgets.

The BMW 1-Series starts with a stiff, energy-absorbing frame designed to be resistant to vibration, resulting in a stable, comfortable ride with minimal squeaks and rattles. BMW has strived to create an ideal 50/50 front-to-rear balance with the 1-Series, to ensure the "signature feel" of BMW driving. In addition, the rear-wheel-drive configuration, with the engine at the front and the driving wheels at the rear, provides optimal traction, stability, and handling, according to BMW.

Drivers have a choice of two engines. A 230-horsepower, 3.0-liter inline six-cylinder engine, available in the 128i sedan and convertible trims, features Valvetronic valvetrain technology, which results in plenty of power with improved fuel efficiency. Stepping up a big notch, the BMW 135i sedan comes with a 300-horsepower, 3.0-liter inline six-cylinder, which achieves its extra power punch thanks to two turbochargers and direct Piezo gas injectors.

Transmissions include a six-speed manual, which comes standard on all trims, as well as an optional three-mode, six-speed Steptronic. The three shift modes include Manual, which enables drivers to shift without a clutch pedal (optional steering-wheel-mounted shift paddles are available); the Sport mode; and the Drive mode, which uses BMW's automatic adaptive transmission.

Other mechanical features include a dynamic braking control system, which adjusts the brakes depending on driving conditions, and dynamic traction control, which kicks in at a higher threshold, enabling drivers to push the limits a bit more while ensuring their safety. Antilock brakes, adaptive brake lights, a tire pressure monitoring system, and programmable daytime running lights are also included.

The interior of the 1-Series comes well equipped as well, with such standard features as eight-way adjustable front seats, gray poplar wood trim, a leather-wrapped steering wheel with audio and phone controls, an engine start/stop button, a two-way power moonroof, automatic climate control, and a 10-speaker AM/FM/CD audio system with an MP3 input jack. A wide range of options, including a navigation system, Bluetooth connectivity, and Sirius satellite radio, is available.

Reviewers who have test-driven a European version of the 1-Series gave it high marks, noting that the rear-wheel-drive configuration separates the 1-Series from the front-wheel-driven competition. Reviewers also noted that the backseat of the 1-Series can be cramped for adults, and that cargo space is limited, but for those in the driver's seat, the sport-oriented 1-Series excels.

My Listing Is Not Showing, Can You Help?

When I search my vehicle in the search, it does not show. We've paid for enhanced listing. Are you able to help?

What Is A Verified Buyer

my buyer says they are a 'verified buyer'. What does that mean and how do I know that is true?

I took my wife's BMW for an oil change. The next day the oil level was zero. I took it back to the mechanic 2 miles away, it stopped right at the entance and couldn't restart the engine. It needed t...

I Have 128i BMW 08 Change Battery Now Want Start

Change Battery in my 08 BMW now car want start, How do I reset battery?????