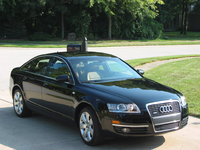 The 2008 Audi A6 is a solid and well-appointed luxury sedan, but will buyers warm up to its tech-heavy format? 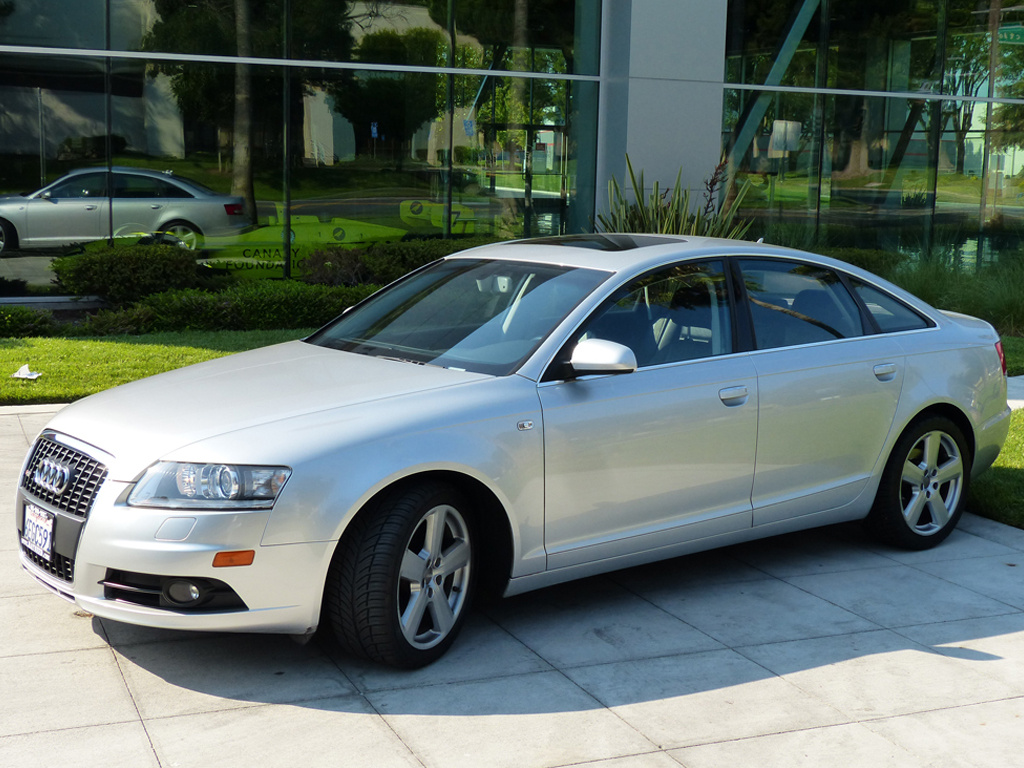 The A6 was last completely overhauled for the 2004 model year, but the midsize German luxury car still offers enough advanced technology and comfort features to keep it relevant in a competitive segment. The 2008 A6 is available in both sedan and wagon formats, the latter of which is known as the Avant. The A6 can be loaded up with the latest in entertainment, comfort, and performance tech, but its price tag grows quickly with each addition. That’s not out of line with the rest of the segment, but are Audi’s efforts enough to hold off newer and less expensive competition from other parts of the car world? 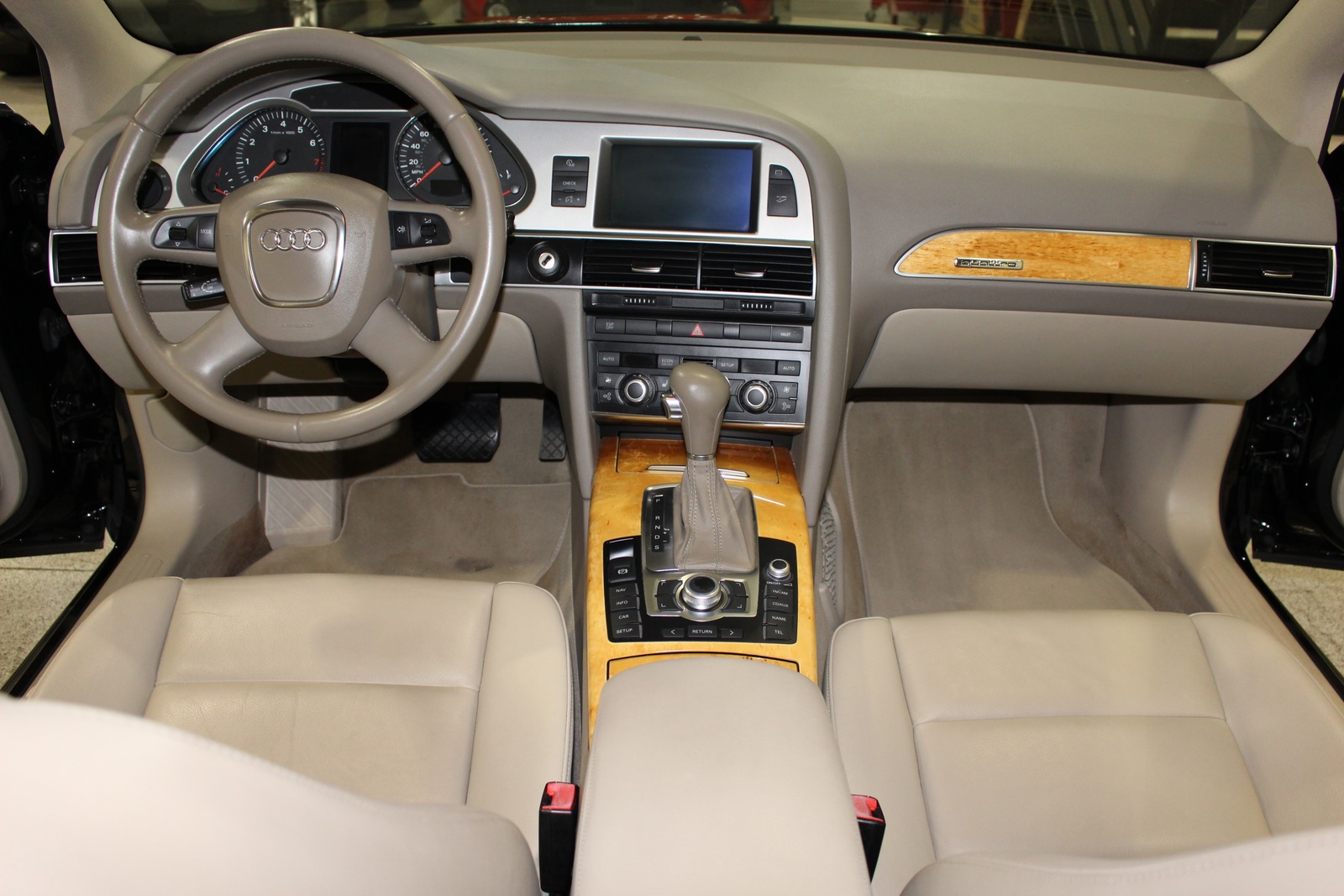 The A6 retains some of the smooth, rounded lines that defined all of Audi’s cars in the early 2000s, but it has also taken on a sharper and more aggressive look in recent years. The car’s front end is dominated by a large grille that stretches from the lower bumper area to the hood. It’s a somewhat awkward focal point on an otherwise very clean design. The A6 is devoid of clutter and has very little in the way of logos and badges, which adds to its sleek and upscale appearance.

The A6’s interior is as clean and tidy as its exterior. Wood and metal trim pieces break up what would otherwise be a dark and monotone interior color scheme. The center stack is heavy on the buttons and controls, but everything is clearly labeled and intuitively positioned. The navigation screen is located high in the center stack and is angled to be easily visible to the driver. Leather seats and thick carpeting complete the luxurious cabin. 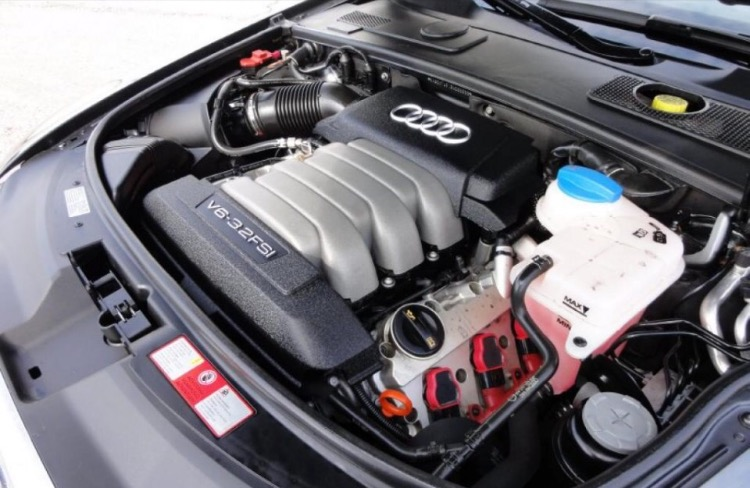 The 2008 A6 is available with one of two engines: a 3.2-liter V6 that produces 255 horsepower and a 4.2-liter V8 that is rated at 350 hp. The V8 is only available in the A6 sedan. Front-wheel-drive (FWD) models come with a continuously variable transmission (CVT) that Audi calls “Multitronic”. It has been programmed to behave like a shiftable automatic transmission. Models equipped with quattro all-wheel drive (AWD) use a 6-speed automatic transmission. The S6 is a separate model and will not be covered in this review, but it comes with a powerful V10 engine.

Both engines provide more than enough power to get the A6 moving with excitement, but the 350-hp V8 makes the car feel downright fast. Its 325 pound-feet of torque give the A6 authoritative acceleration and a muscular sound that puts the car well into sport sedan territory.

When equipped with the 6-speed automatic transmission, the A6 is a competent cruiser that feels responsive and agile. The gearbox is well-tuned to keep the engine in its powerband, but it can manage quiet and smooth operation at highway speeds.

The FWD A6 offers the best fuel economy of the bunch, rated at 18 city, 27 highway, and 21 combined. Quattro models, both wagon and sedan, aren’t far behind. They are rated at 17 city, 25 highway, and 20 combined. A6 models equipped with the V8 engine can achieve 16 city, 23 highway, and 18 combined. 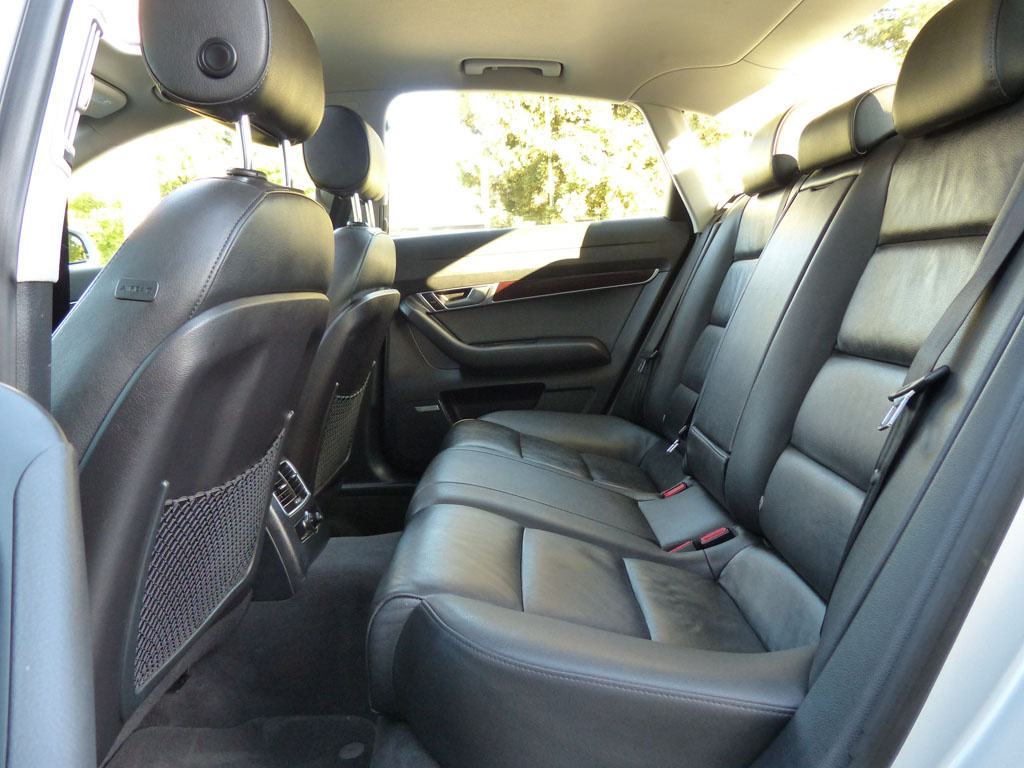 Space and comfort are the primary expectations of German luxury sedans, and the A6 does not disappoint. Though its seats and interior lean to the sporty side, the A6 remains a cushy and upscale car. The sloping roof impedes the otherwise airy cabin, but there is generous headroom and the A6’s lengthy wheelbase gives passengers a vast amount of legroom.

Compared to the competition, the Mercedes-Benz E-Class, Cadillac STS, and Jaguar XF, the Audi feels more personal and warm inside and lacks the somewhat clinical feel that other cars bring to the table. The A6’s sound deadening insulates passengers from all but the worst of road- and wind noise and, combined with the comfortable suspension, the car is quite a nice place to spend time. The trunk is equipped with special hinges that are almost hidden to allow unimpeded access to the cargo space, and there are grocery hooks that make toting bags around very easy. 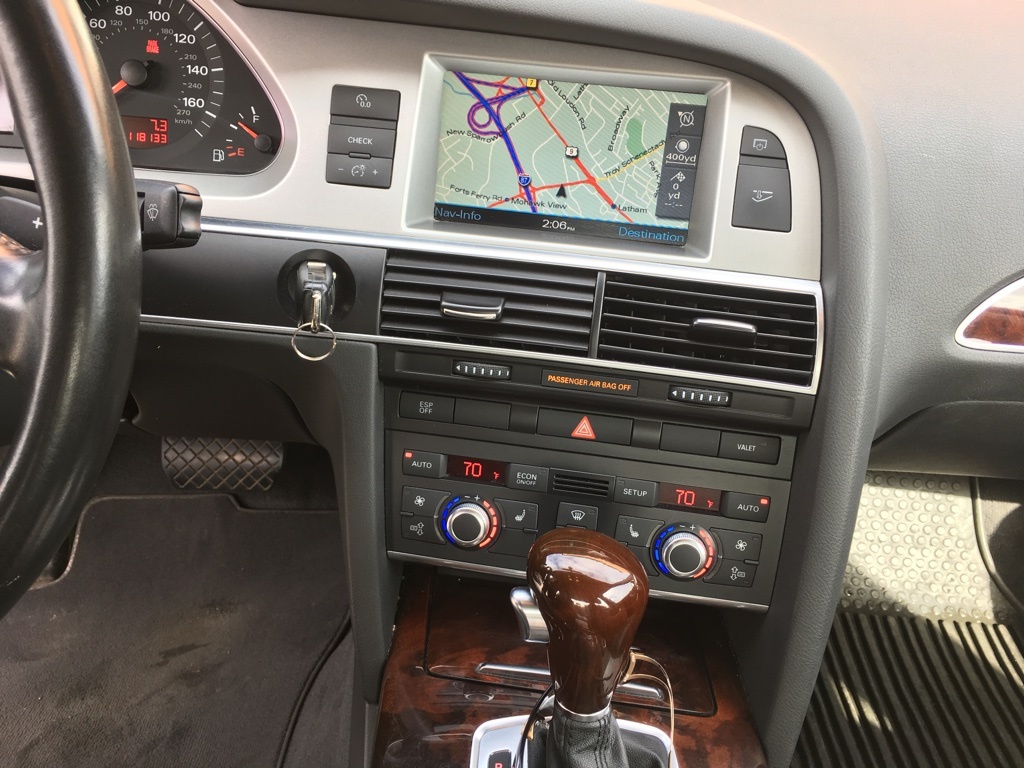 The A6 is like a greatest hits album of the latest automotive technologies. The MMI vehicle management system can be complicated for some and requires some learning, but it works without a hitch, otherwise. The A6 comes with a navigation system that runs smoothly on the 7-inch screen, and the premium audio system sounds great inside the Audi’s well-insulated cabin. 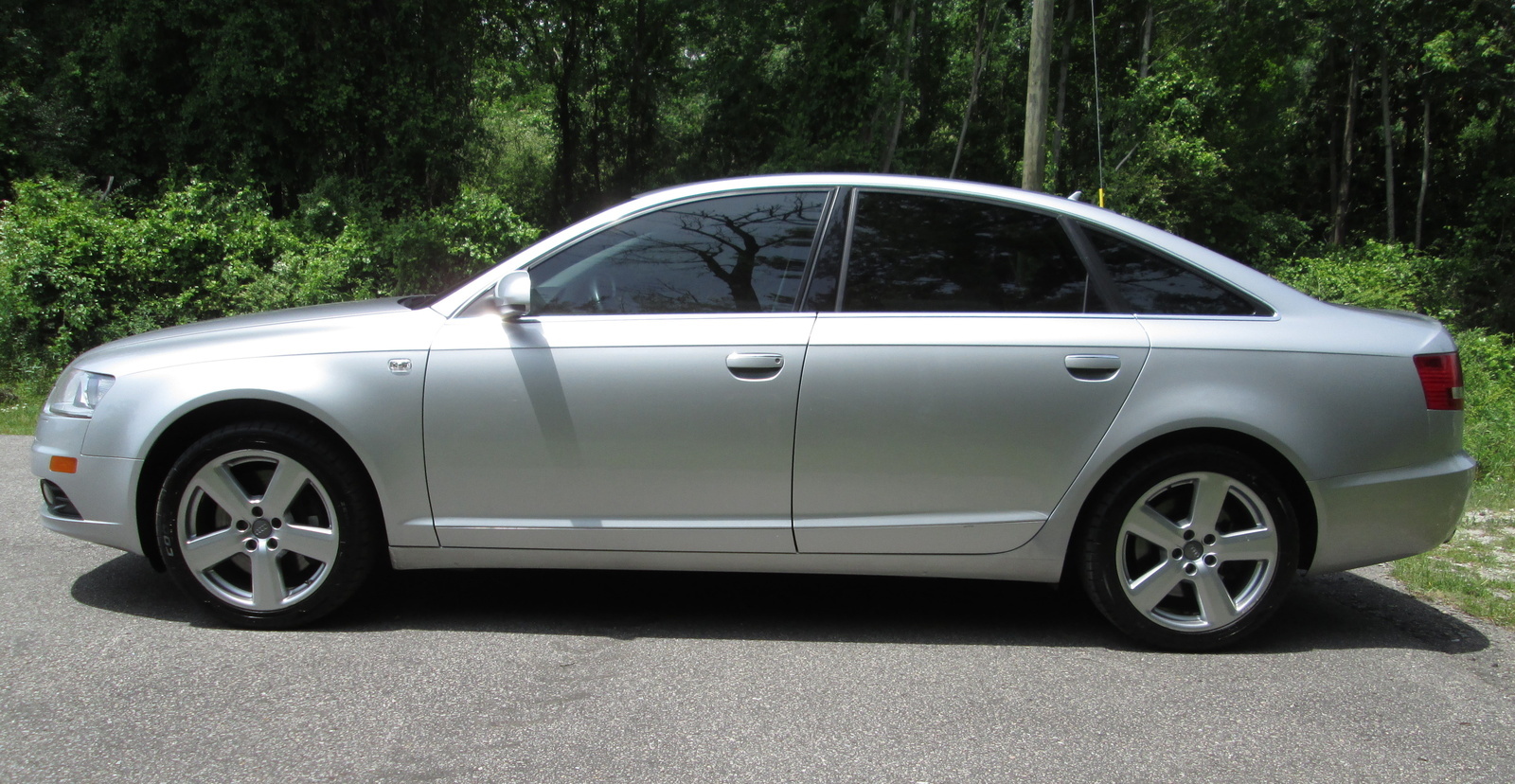 The Insurance Institute for Highway Safety (IIHS) awarded the 2008 Audi A6 with a Top Safety Pick designation, which includes “Good” ratings for moderate overlap front, side, and head-restraint crashworthiness. Roof strength was rated “Acceptable”. 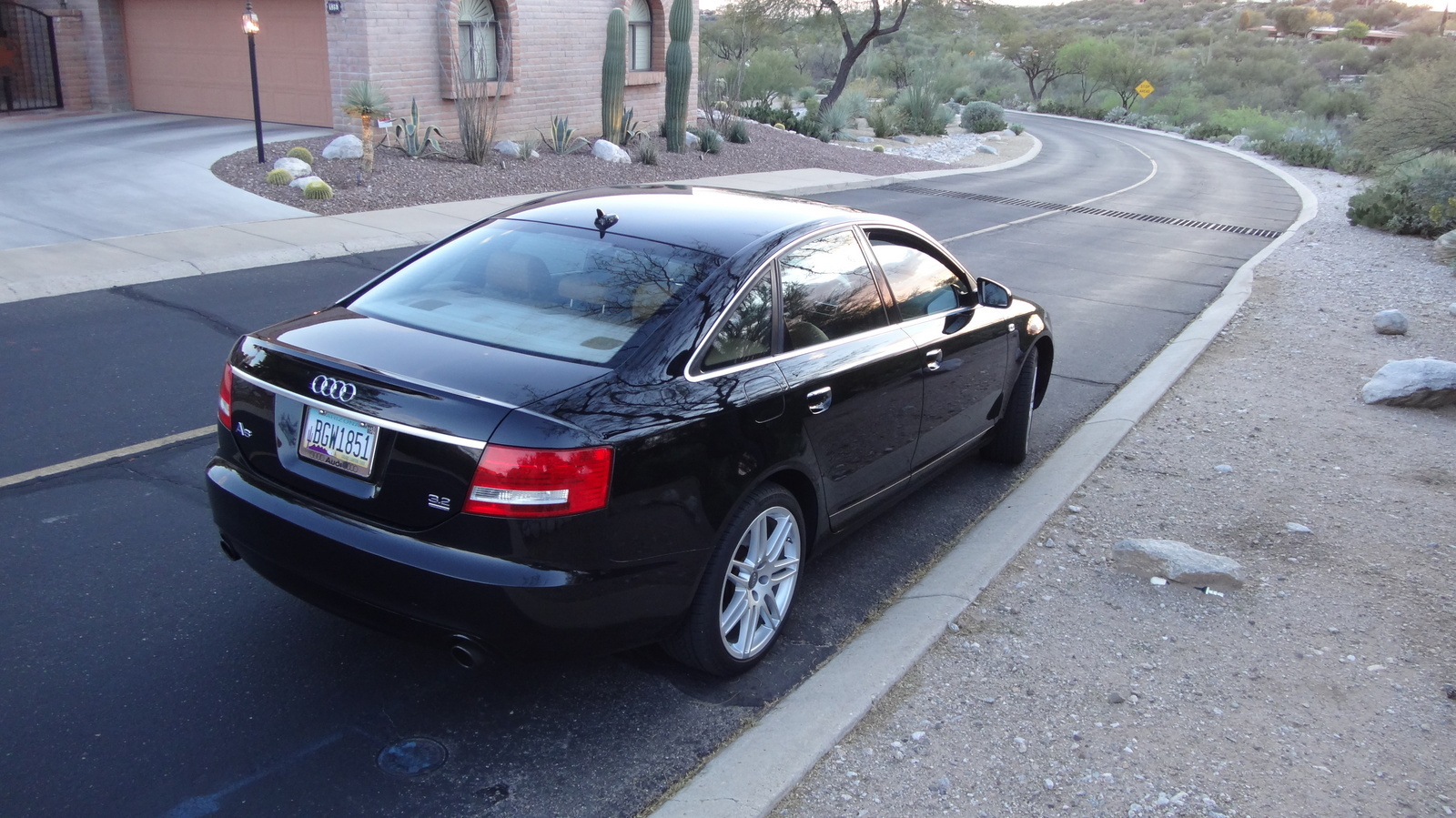 The A6’s price tag, which starts at $42,950 and stretches to over $46,000, implies luxury but not necessarily value. Thankfully, the car comes well equipped in its least expensive format. That kind of money buys a strong V6 engine and a long list of technology and comfort features.

Looking at the competition, the A6 undercuts the BMW 5 Series and Mercedes-Benz E-Class price tags by quite a bit, and those cars’ prices grow very quickly with the addition of options. All-in, the A6 lands at a price that makes the other two look expensive by comparison.

Users ranked 2008 Audi A6 against other cars which they drove/owned. Each ranking was based on 9 categories. Here is the summary of top rankings.

Burning oil. Blue smoke for about 30 seconds out tail pipes upon every start up. Covers have been resealed. Vacuum pump replaced. Replaced the gasket on valve cover. Still getting this blue cloud of s...

Hi. I Have An Audi A6, It Does Not Go On Reverse

good day, i have an Audi A6, it refuse to go on reverse

2008 Audi A6. Drove 3 miles & AC began blowing warm air, then cool then only warm. 3 beepsmthen warning light came on saying turn engine off & check coolant. Car was towed to mechanic where it’s be...