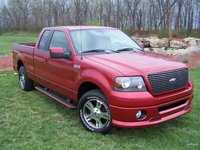 The Ford F-150 does not lead the pack on power, but it sets the bar for cabin design and driving characteristics. 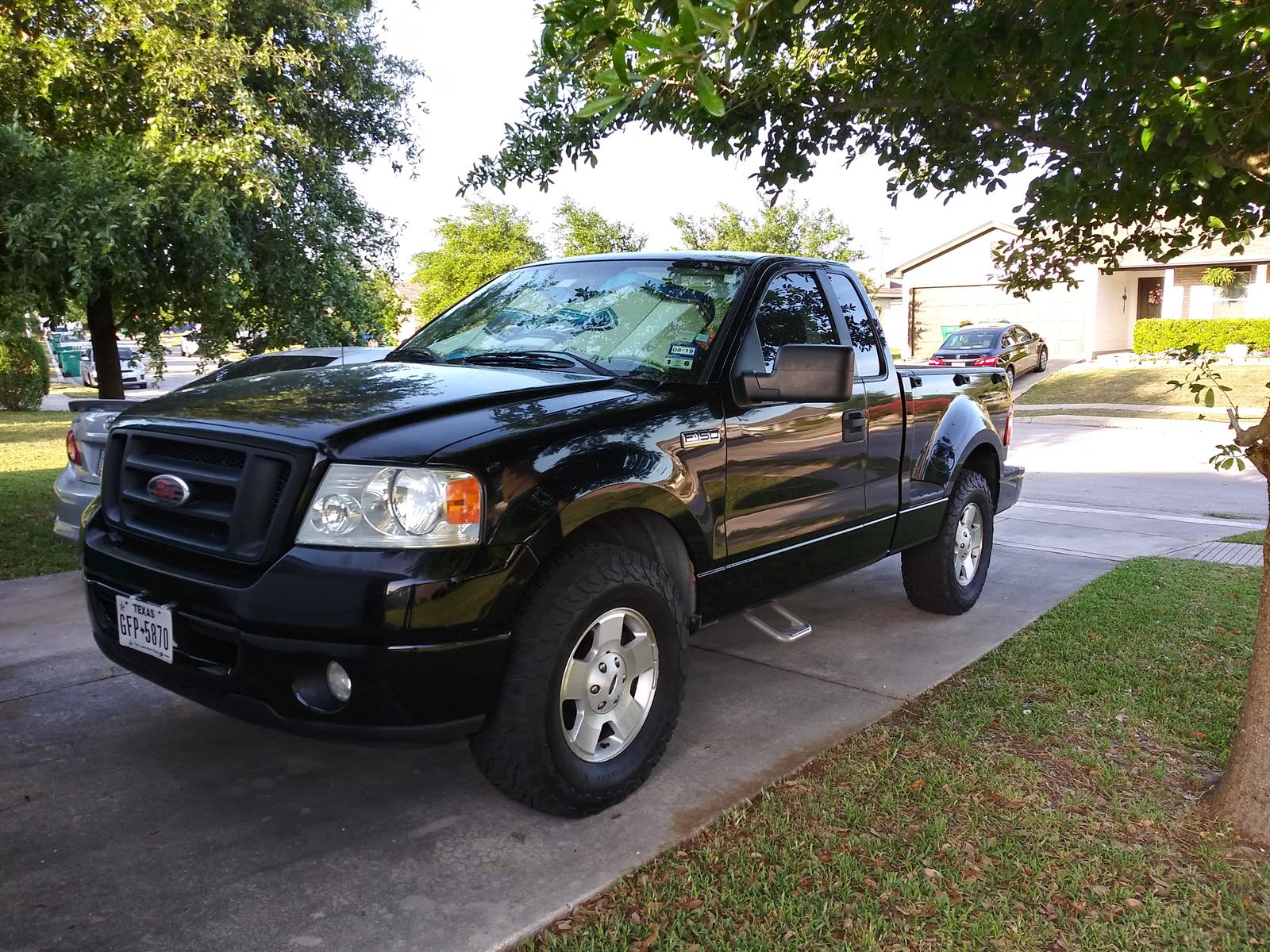 The full-size truck segment is among the most competitive in the whole car market. These big, utilitarian vehicles need to be capable of towing, hauling, and other “truck” duties. But full-size trucks have evolved through the years to be more comfortable for daily commuting, road trips, and many of the other tasks that were once the sole domain of minivans and station wagons. No more apparent is this dual personality than in the 2008 Ford F-150.

The eleventh generation of the F-150 arrived for the 2004 model year and has been carried over to the 2007 model year, gaining additional features and trims along the way. The F-150 may not be the most powerful truck available, but it is an approachable, useful truck that puts as much priority on the commute as it does on the worksite. 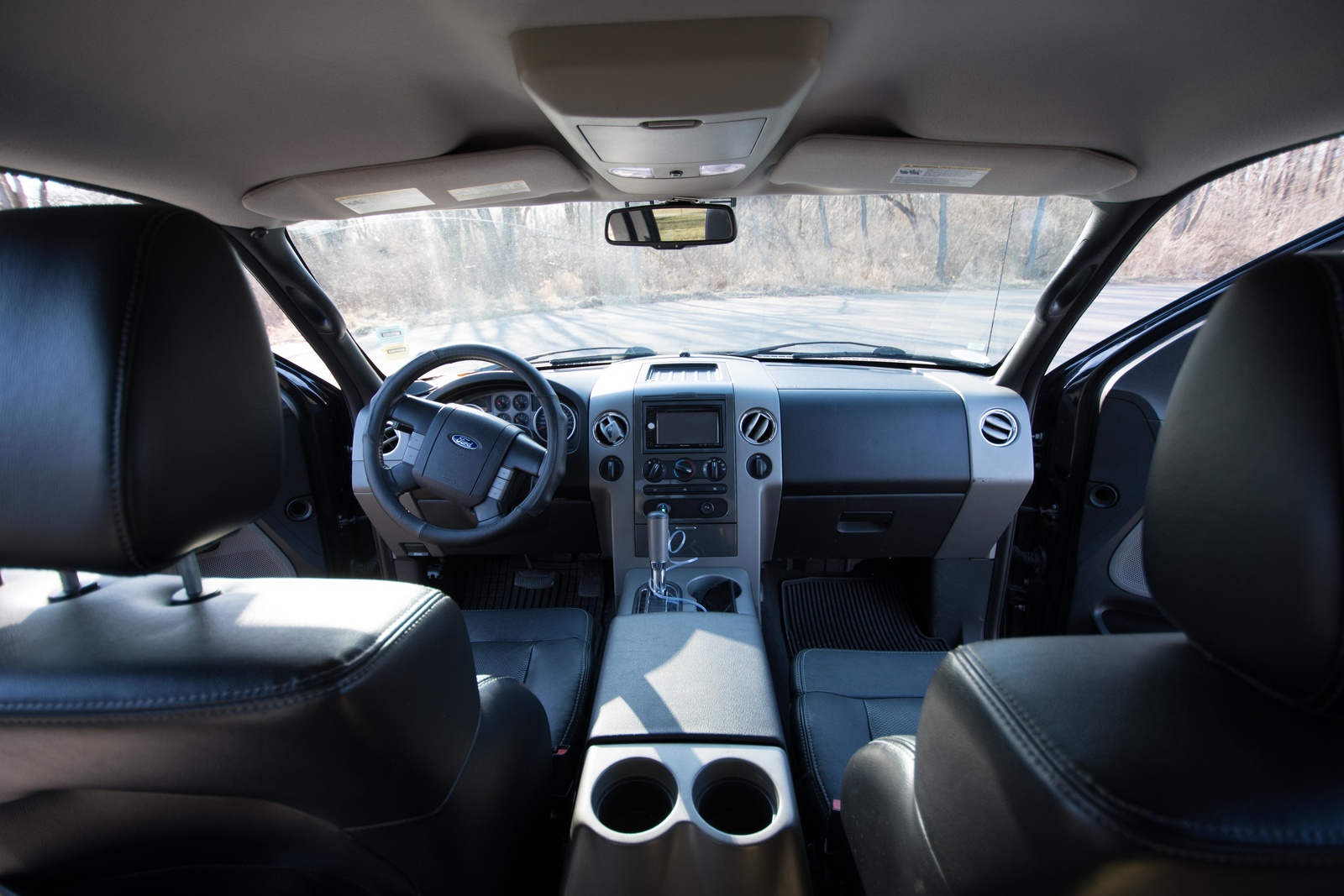 The F-150 has a pretty conventional and unassuming exterior, and there’s nothing wrong with that—especially among full-size trucks, where conservative styling will endure for the life of the vehicle. There is a vast array of cab, bed, engine, and trim configurations, starting with the single cab truck, joined by the extended SuperCab, and topped off by the full 4-door SuperCrew.

The cabin is more forward-thinking than the exterior. It has a modern, industrial look to it, and yet is inviting and comfortable. This will be a great place to sit out any long commute. Trims for the F-150 include XL, STX, XLT, FX4, and Lariat, as well as luxury trims, such as the King Ranch and the Harley-Davidson edition. Standard features on the XL include steel wheels, air conditioning, manual windows, locks, and mirrors, and an AM/FM stereo. Moving up to the SuperCrew adds a CD player to the XL. Options include power amenities, leather upholstery, a power moonroof, and a DVD-based navigation system. 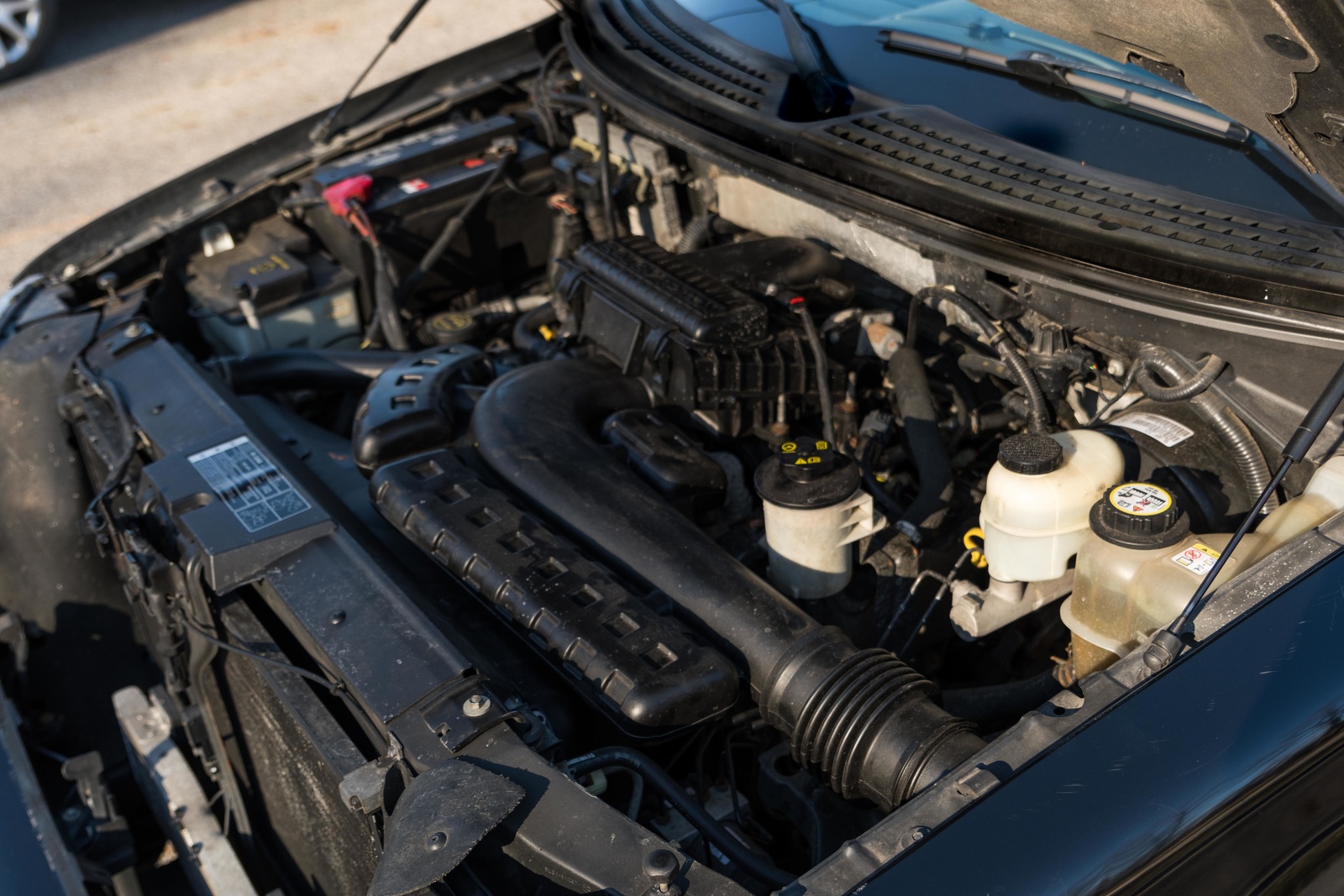 The V6 can be had with a 5-speed manual or 4-speed automatic transmission, the latter of which comes standard on all other trims. All engines can be paired to rear-wheel drive (RWD) or 4-wheel drive (4WD) with low-range gearing. The Harley-Davidson edition swaps out the 4WD for all-wheel drive (AWD) and loses low-range gearing in the process.

These engines are not particularly powerful—even the top-end V8. You’ll find more power and towing capability in the rival Chevrolet Silverado 1500. Where the F-150 shines, though, is in its driving manners. Whether around town or on the highway, the F-150 is composed and won’t jostle you around the way other trucks may. 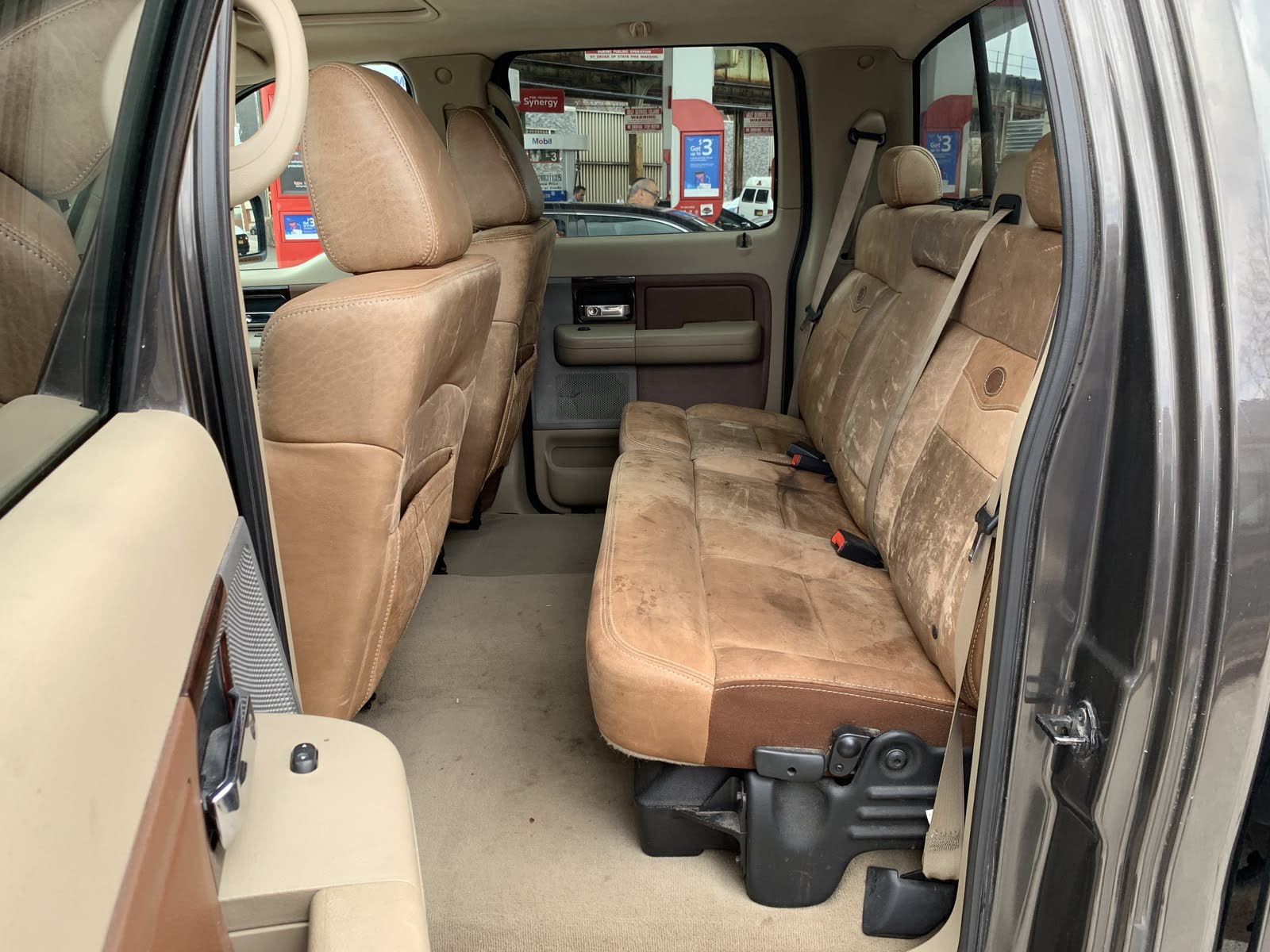 As mentioned, cab sizes are regular, SuperCab, and SuperCrew. The regular cab actually has a small, rear-hinged quarter-door aft of the actual passenger door. This allows the owner to access the space behind the seat without having to fold that seat forward.

The SuperCab has larger rear-hinged doors, and the front doors must be opened to access them. This is a consideration if you have kids or carpool, and must open that door a lot. In that case, check out the full 4-door SuperCab, which has four full doors and tons of cabin space. There is more than enough head- and legroom for all passengers among both rows. 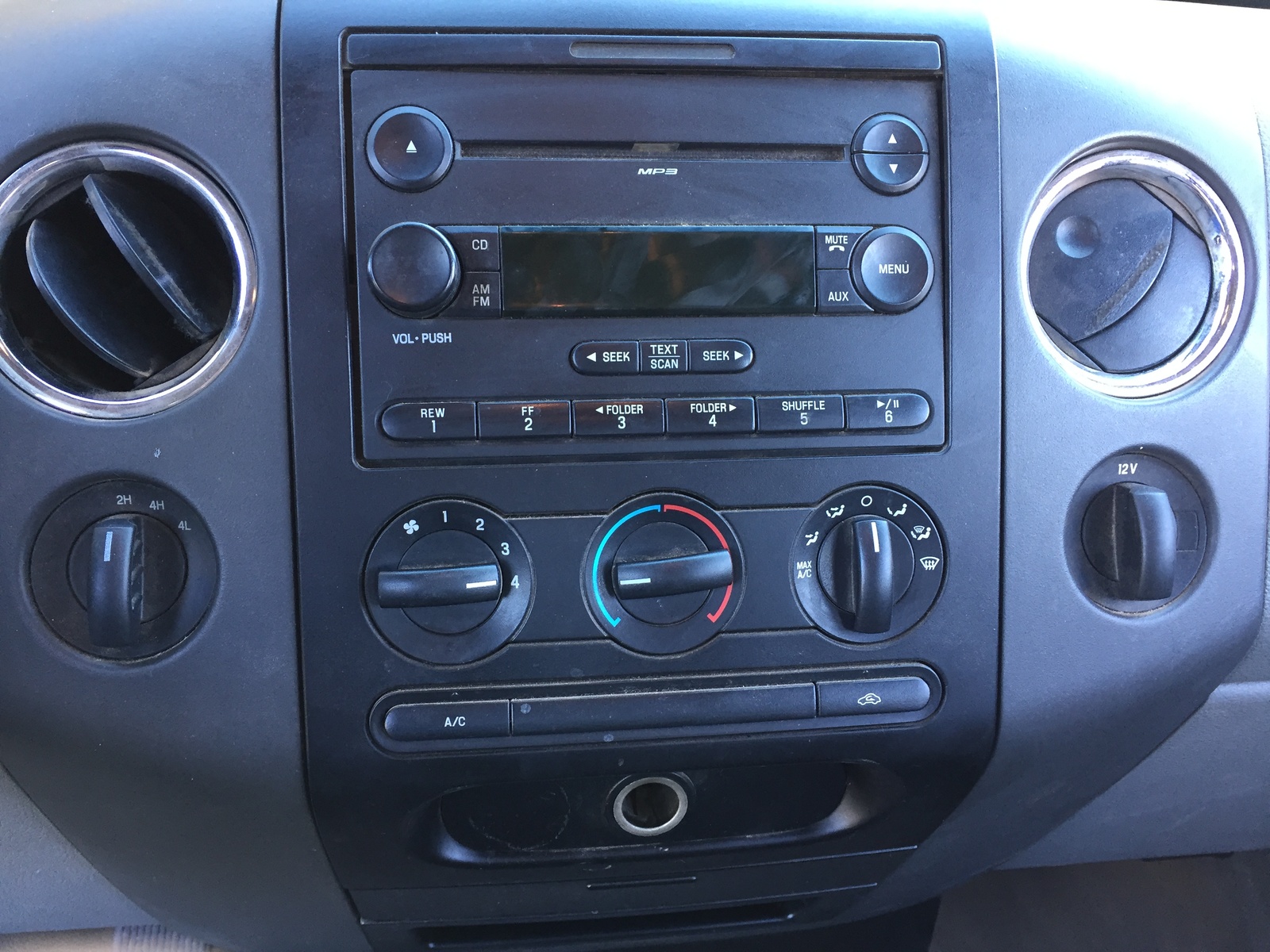 The standard stereo is an AM/FM radio, and all trims but the XL get a standard auxiliary audio jack. Options include satellite radio (subscription required), and a DVD-based navigation system. The navigation system is operated via a touchscreen setup, which is fine enough to use, but it is somewhat small compared to the F-150's big, industrial dash. 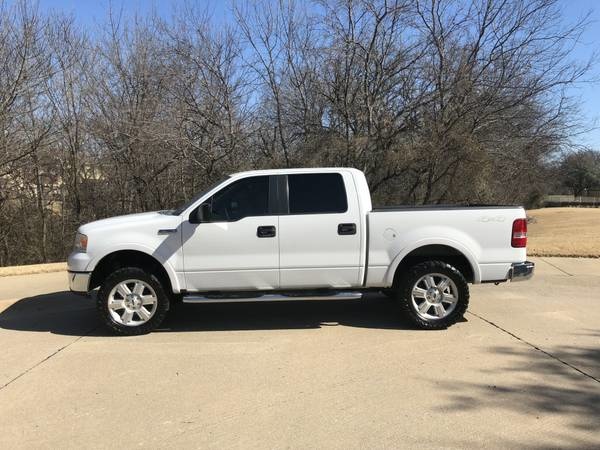 Standard safety features include 4-wheel antilock disc brakes and a newly standard tire-pressure monitor. Traction control is an option on RWD V8 models. The truck does not offer stability control, nor does it offer side-impact airbags, even as an option. It does provide front airbags, and overall, it has scored well in testing by the Insurance Institute for Highway Safety (IIHS), as well as the National Highway Traffic Safety Administration (NHTSA). 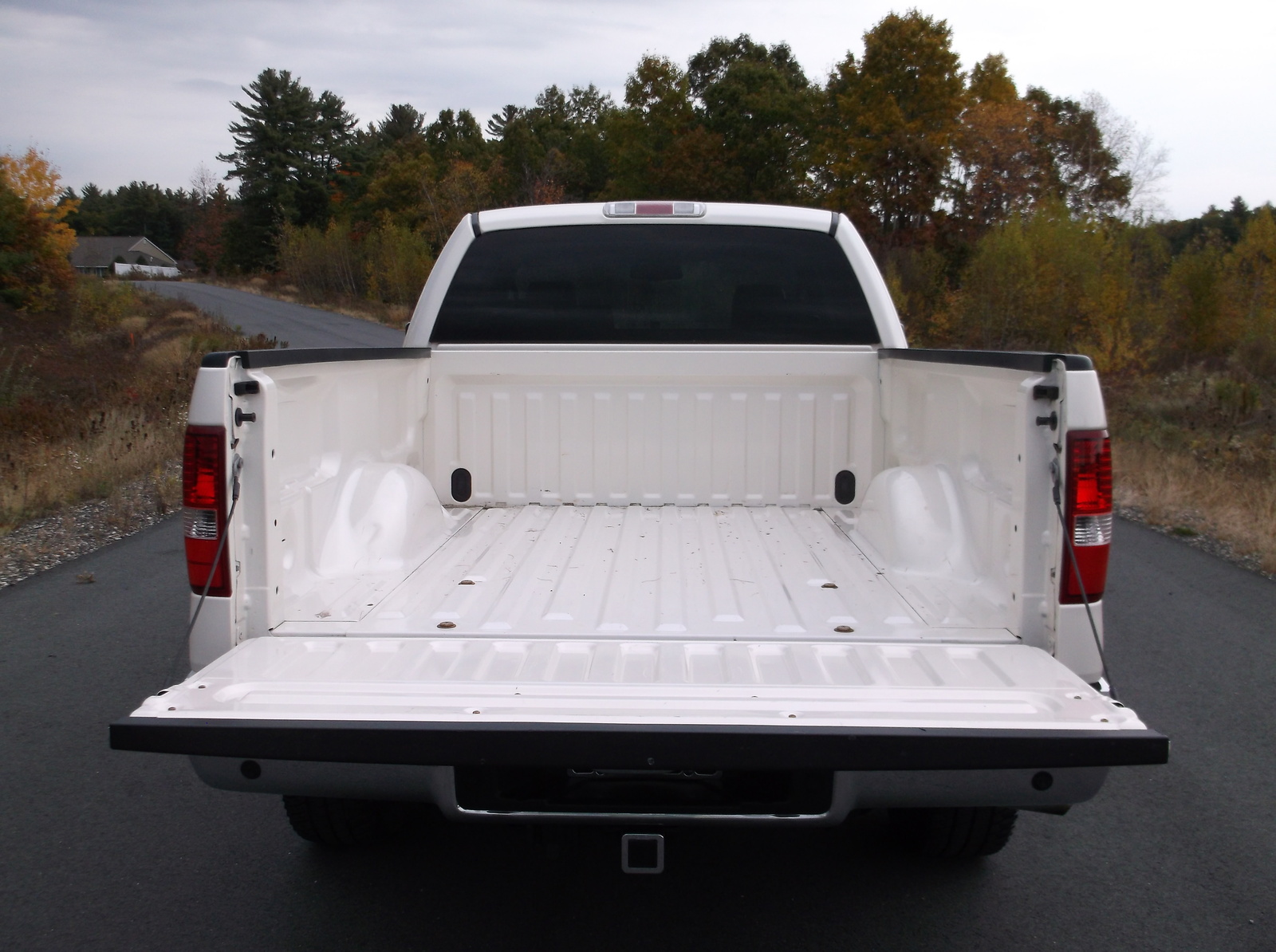 The best fuel economy can be found with the V6 engine with RWD, which might not come as a shock. What might be surprising is that the 4.6-liter V8 performs nearly as well in this regard. The V6 returns 14 mpg city, 19 mpg highway, 16 combined, while the V8 returns 13 mpg city, 18 highway, 15 combined. The big 5.4-liter V8 with 4WD is the least-efficient, returning 12 mpg city, 16 highway, and 14 combined.

Base MSRP for the 2007 Ford F-150 is $18,275, for a single cab, V6, XL with RWD. An XLT starts at $23,280, while a Lariat starts at $29,825. The most expensive starting price is for the AWD SuperCrew Harley-Davidson Edition, starting at $39,285. Pricing falls largely in line with that of the rival Chevrolet Silverado 1500, which has been redesigned for 2007. The Silverado has more powerful engines, but the F-150 has better road dynamics and that welcoming interior.

Users ranked 2007 Ford F-150 against other cars which they drove/owned. Each ranking was based on 9 categories. Here is the summary of top rankings.

Loss Of Power In Acceleration

Truck runs but when it's time to get in the gas and go there is no go. It takes a while to get up to speed. I cannot pass or pull out into traffic. Begenning of acceleration or not there is just no...

I have a 2007 Ford F150 Lariat Super Crew with the 5.4l V8 triton. I have replaced the cam phasers, oil pump, chains, guides and tensioners, as well as the coils and spark plugs. Also went to full s...

Radio Lights Do Not Work

I have a Am/Fm CD player Org. It works fine but lights don't show up, Time, chanel. station ???