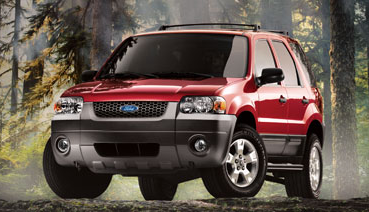 Ford made no significant mechanical or interior upgrades to the 2007 Ford Escape Hybrid, though it did offer the eco-friendly vehicle in a number of new colors (Vista Blue Metallic, Dune Pearl, and Tungsten Gray), as well as with some new upgrade packages, such as a Silver Appearance Package with silver body accents. As in previous years, the Escape Hybrid was available in both front-wheel and four-wheel-drive versions.

The Escape Hybrid's innovative powerplant consists of a fuel-efficient 2.3-liter four-cylinder Atkinson Cycle engine and a compact electric motor, which powers the vehicle up to 25 miles per hour, conserving fuel.

Other hybrid-related technologies include an electronically controlled continuously variable transmission (eCVT), which results in seamless acceleration, and regenerative braking, which generates electricity when you apply the brakes to recharge the battery. According to Ford, the hybrid powerplant produces 70 percent better fuel economy in the city than a traditional gas-fueled four-cylinder Escape.

That may be true, but some drivers expressed disappointment at not getting the fuel economy they had hoped for, particularly during city driving. Ford notes that the Escape Hybrid should average about 30 miles per gallon, which is acceptable for an SUV but not impressive for a hybrid, and not a substantial improvement over, say, a standard gas-powered sedan. Others noted that the Escape Hybrid can feel nose-heavy, thanks to its sightly heavier body weight due to the hybrid engine. Some also noted the vehicle is noisier than expected, though interior comfort and handling are said to be good.

Overall, drivers felt that the Escape Hybrid was an acceptable, though pricey, alternative to standard gas-guzzling SUVs, enabling them to make fewer trips to the gas station while still having plenty of room to haul around the family.

What's your take on the 2007 Ford Escape Hybrid?

Shrimper I have had one for a number of years , purchased used with 89k, and am at 235k, tho things are just starting to wear out. Love everything about it... Looking for another

Matt Our Ford Escape Hybrid (FEH) has 252k miles and has been consistently delivering 30 and 31 MPGs. The upright seating position is Very comfy and the steering handling feels precise. We also have 2 Prius cars in the family, which deliver Way better economy but after driving our '04 Prius in the snow last winter, we are happy to have this added security to our 'fleet' of hybrids (3 total). I happen to be Very fond of the space. At 6'3", the Prius does not fit me anywhere near as well as this FEH. By the way, I read online how many of these were use as taxicabs. 400-600k miles were the norm that journalist came across. for their article. Pretty impressive indeed!

Have you driven a 2007 Ford Escape Hybrid?
Rank This Car

Engine Knocking Sounds While Car Is Turned Off

With engine off the 2007 ford escape high breed makes a knocking sound, also will not hold a charge past a day if not driven. Any idea what the issue could be?

2007 Ford Escape Hybrid (Approx 200K Miles). Vehicle had been running fine throughout the summer day as with any other day. It was running and in park for several minutes. Car was turned off, tur...

I'm wondering if my car holds a high mileage record. It is about to hit the 700,000 mark. It used to be a NYC taxi and I've driven it from New York south through 4 countries and back, and it's s...

593 views with 4 answers (last answer about a year ago)

How Can I Solve The Starting Problem On My Ford Escape Hybrid 2007?

I just bidded for this 2007 Ford escape hybrid and it would not dtart? what can I do?

698 views with 6 answers (last answer about a year ago)