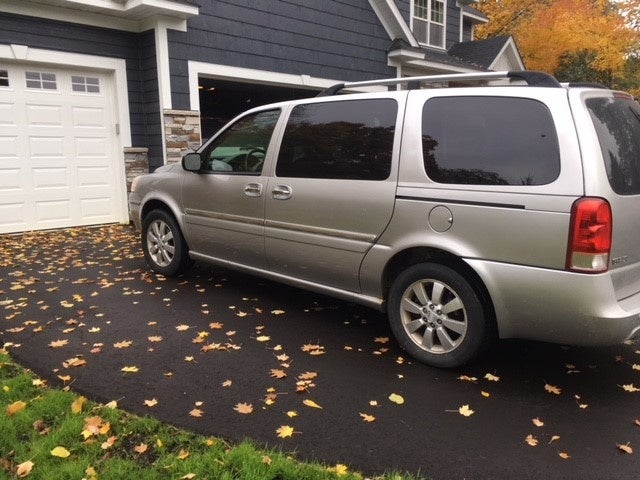 CarGurus has 39 nationwide Terraza listings and the tools to find you a great deal.

Known more for its large sedans, it seems odd that Buick would wait this late in the minivan game for its first entry, the Buick Terraza. Now in its third year, this 7-passenger van with SUV front-end styling has failed to capture the family market.

Gone in the 2007 Terraza is the all-wheel-drive option. Now only front-wheel drive, the minivan has received a more powerful engine. Replacing the old 3.5-liter V6 is a 3.9-liter V6 that hits 240 hp. The 4-speed automatic is still the only offered transmission. The Terraza also gets a new trim this year. Tucked between the luxury CXL and the base CX is a sportier CX Plus.

While even the base model comes well equipped with ABS brakes, traction control, stability system, OnStar, keyless entry, a trip computer and power windows and locks, the CX Plus adds a stiffer sports suspension, rear auto-leveling and a 6-way power driver's seat. The top-end CXL boosts the seat to 8-way and adds memory settings, along with a DVD system, extra power outlet, and a parking assist system. Dual sliding doors are standard and will be either manual or power, depending on the trim or option package. A PhatNoise hard drive, which stores songs, movies and video games is optional. A flexible fuel vehicle should be available later in 2007.

The 2007 Buick Terraza features 3 rows of seats, with both second and third rows able to be removed or folded flat. Owners do say the third row is hard to remove and difficult to get to. Other complaints include excessive road noise and the lack of standard side airbags. Gas mileage is not the greatest, but no minivan excels in this category. On the positive side, owners do love the roominess, easy handling, comfortable seats and the SUV-type looks that try to hide its minivan origins.

GuruLPJ3N I love my 2005 Buick Terraza.. Basic mechanic repairs and maintenance. Hope to find a 2007 in such good shape and not a salvage automobilel

Have you driven a 2007 Buick Terraza?
Rank This Car

CarGurus has 39 nationwide Terraza listings and the tools to find you a great deal.

where are the solenoids located in the tranimisson

I came home and noticed that our van had it's fog lights and rear parking lights on when the van had been turned off for at least a couple of hours. Why???? How can I fix this?