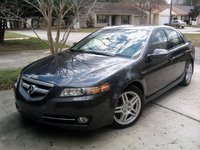 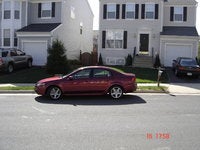 The Acura TL has been lightly updated for the 2007 model year but remains a sporty, almost-luxury bargain. 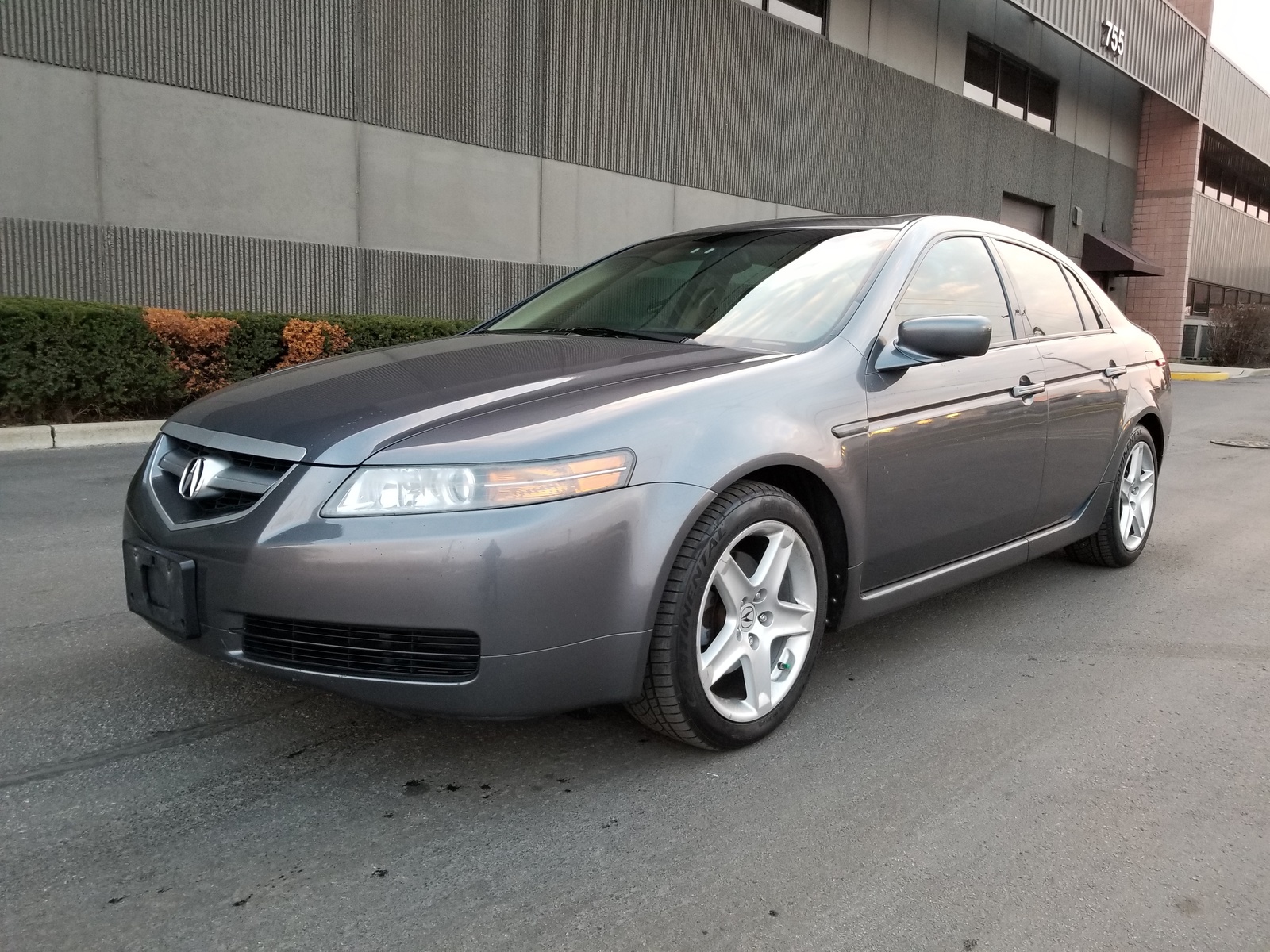 The Acura TL is a sharply styled, responsive, powerful car that combines a host of new technologies with comfortable luxury touches. Acura has updated the 2007 TL with a new grille, a new headlight design, more chrome, and a new front-end design that shifts foglight position. The Accord-based TL also now comes in a more performance-oriented Type-S trim, which has more horsepower and a more aggressive demeanor than the standard car.

The 2007 TL comes in two models, the standard car and the Type-S. The standard TL comes with a 3.2-liter V6 engine that produces 258 horsepower, while the Type-S has a 3.5-liter V6 that delivers 286 horsepower.

The base car comes with a five-speed automatic that can be manually shifted, and the Type-S is available with a 6-speed manual transmission. All versions of the TL are front-wheel drive

The Acura TL is aimed at car buyers that want a premium vehicle without the headache of a premium price tag. It competes with the Audi A4, BMW 3 Series, the Infiniti G35, and others. 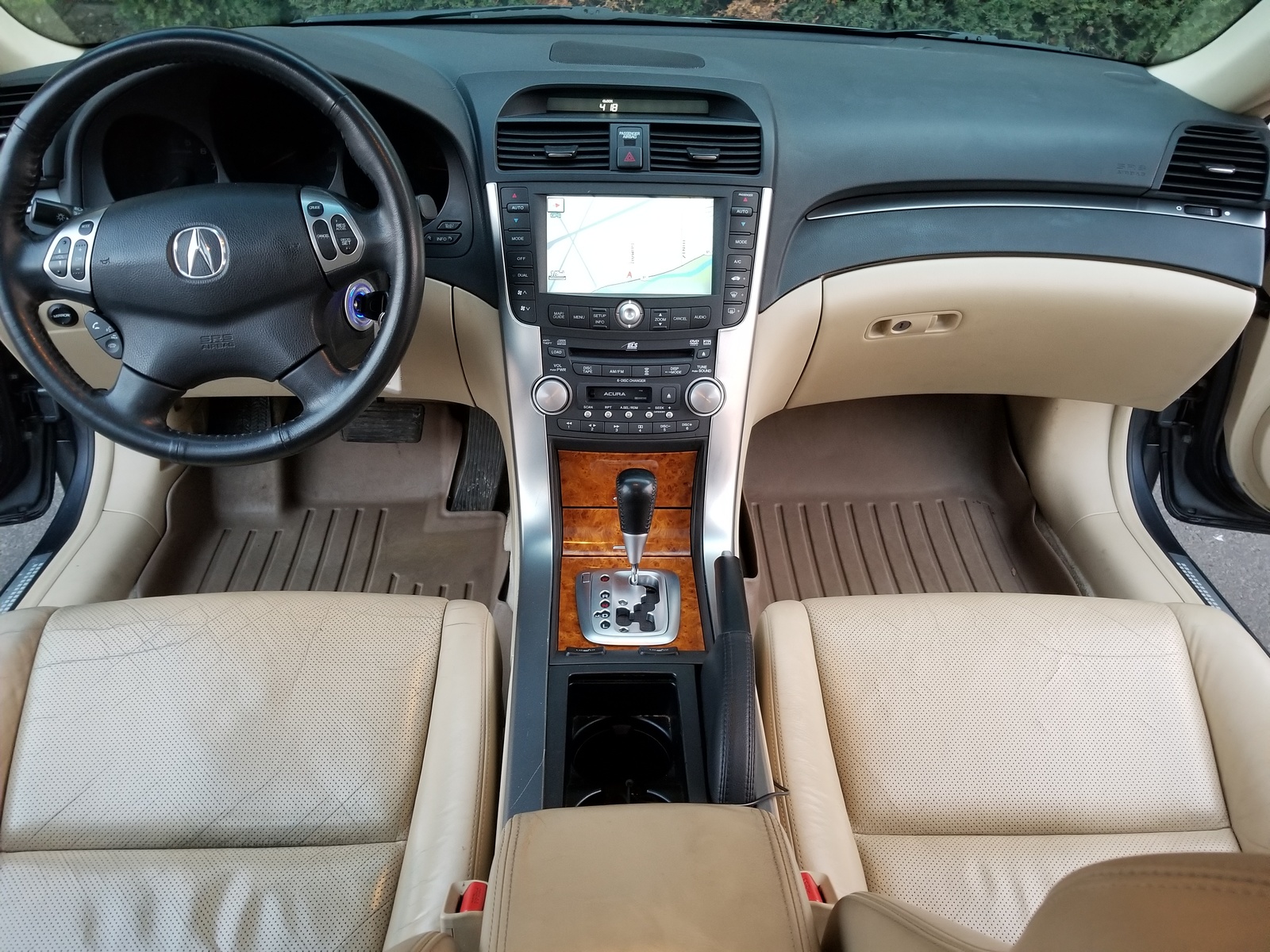 The Acura TL shares much of its underpinnings with the Honda Accord, but there’s only a whiff of Honda in the final product. The TL has dramatic lines that meet in sharp points in various places over its body that give it almost dart-like styling. It’s more aggressive than some of Acura’s other vehicles and stands far apart from its Honda cousin.

Acura’s updates for the TL this model year increased the size of the grille and reshaped the front fascia, but the nose of the car remains pointed and sleek. The Type-S has its own unique front fascia, more aero bodywork, and dual exhausts.

Inside, The TL is comfortable and upscale, but its interior is far more usable and less flashy than some of its luxury counterparts on the market today. Acura used high-end materials throughout the TL’s cabin, so the car feels every bit as expensive as it needs to without going over the top. 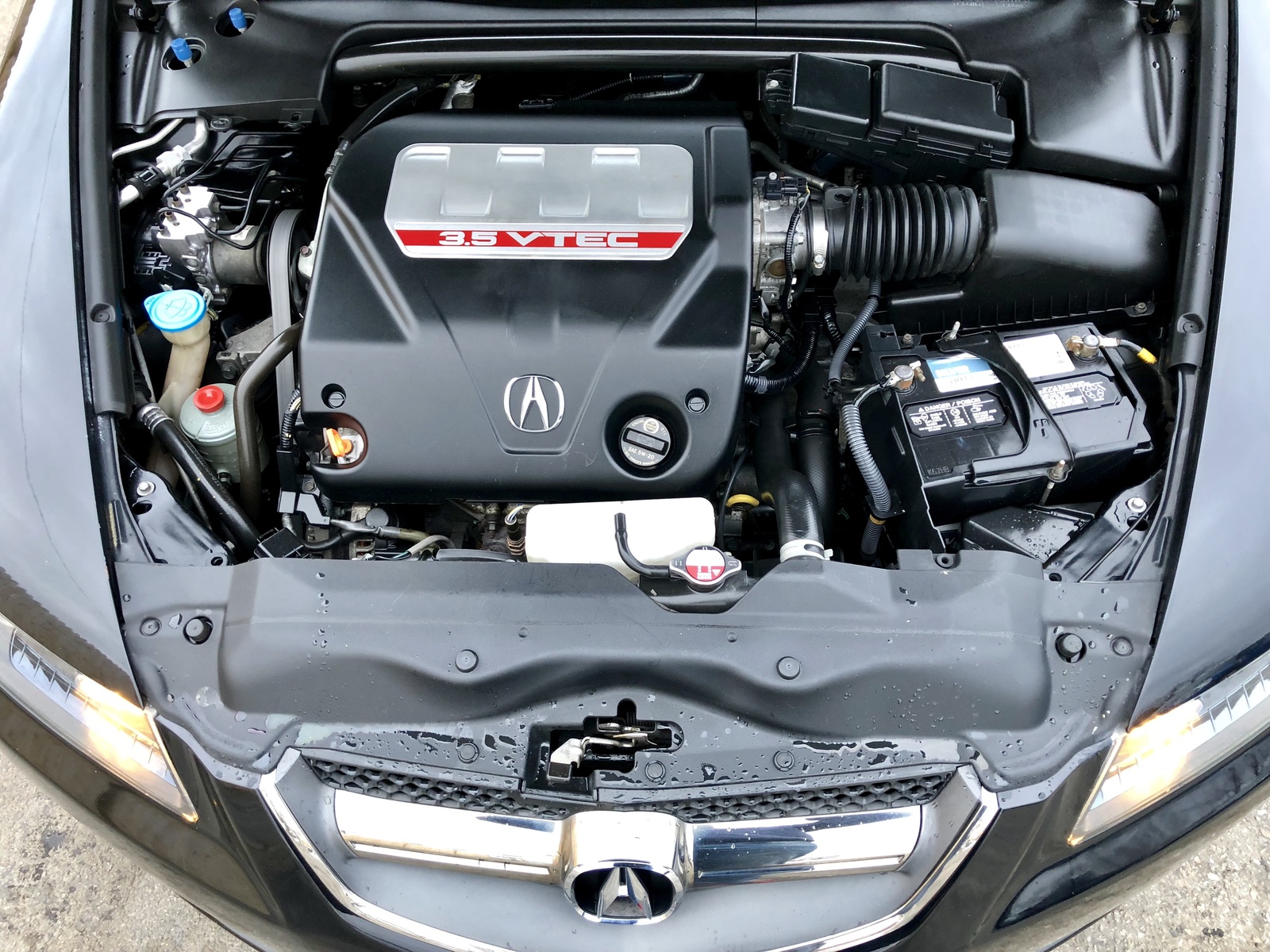 No matter which version you choose, the TL is a driver-focused luxury sedan. The standard model’s 3.2-liter V6 provides healthy acceleration and a powerful sound, but its big party trick is its ability to be buttery smooth and pleasant at low speeds.

The engine also works well with the five-speed automatic gearbox to provide effortless cruising around town. The transmission is smooth shifting and never struggles to find the right gear for the car’s speed and driving situation.

The TL Type-S is a different animal. Its 286-horsepower 3.5-liter V6 makes more power than the smaller engine, but its personality is nearly the same. There’s the same silky-smooth acceleration and calm demeanor around town, and the same throaty, aggressive sound when it’s pushed.

Where the Type-S stands out is with its handling and driving dynamics. Its upgraded damping system keeps body roll in check and makes the TL into a true canyon carving machine. Under heavy acceleration, there is more than a little torque steer, which is an issue where the car’s front wheels pull hard enough to physically change direction. It can be felt in the steering wheel as well. The issue is common in powerful front-drive sports sedans, but the TL manages it with an excellent limited-slip differential.

The Type-S has large front discs with four-piston Brembo calipers, so stopping is well under control, and the whole package works well as a unit to deliver a fun, balanced drive on nearly any surface. The car can be ordered with an A-Spec package, which brings even firmer dampers and larger 18-inch wheels. There won’t be any tail-out drifting in the Type-S as there could be in a rear-wheel-drive car, but the larger wheels and sharper suspension make it quite a fun high-performance car.

Fuel economy ratings for the standard TL land at 18/26/21 mpg city/hwy/combined. The TL Type-S with manual transmission is rated at 18/27/21 mpg, which changes to 17/26/20 with an automatic transmission. 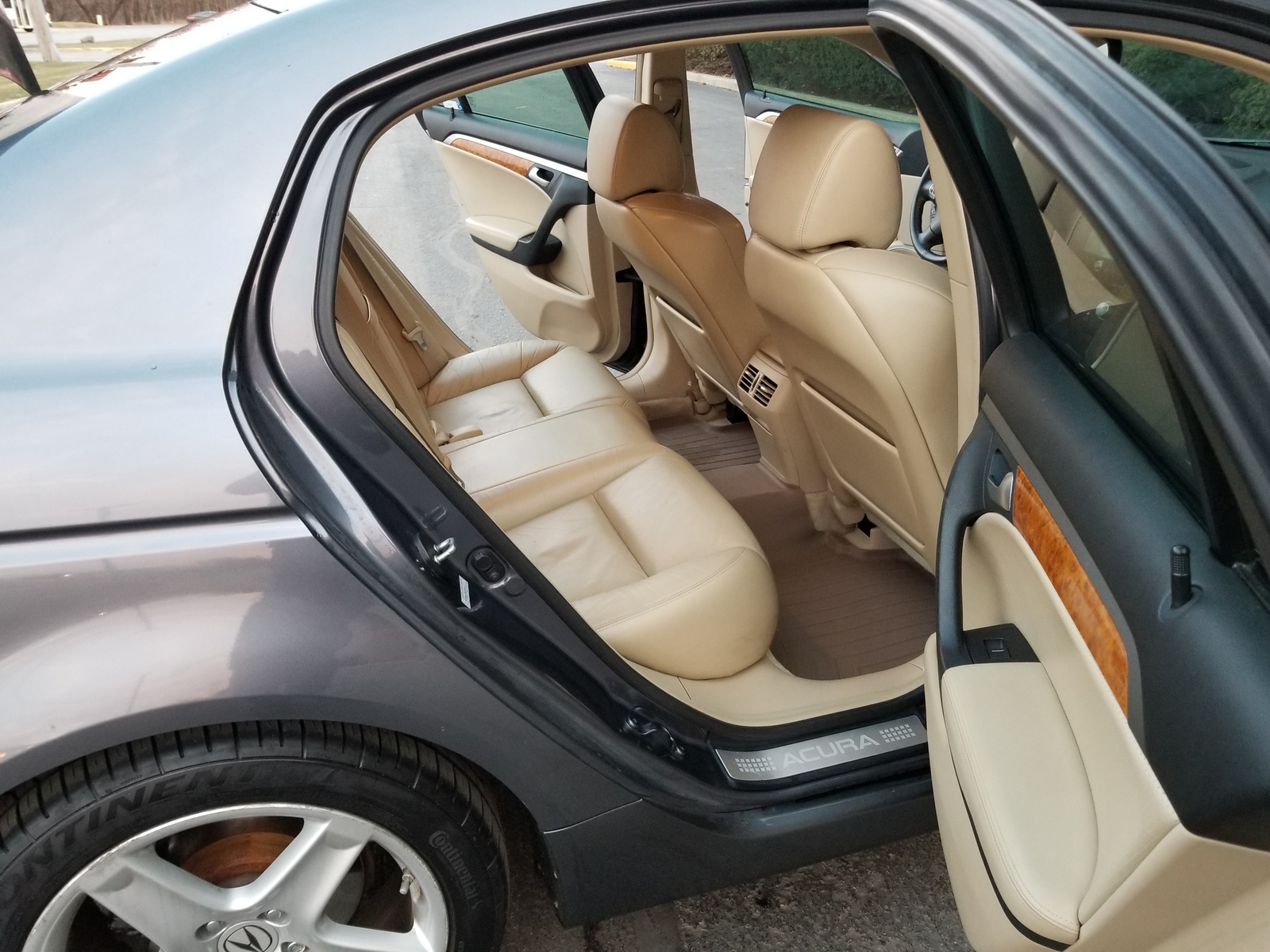 The TL is a balanced, versatile car with a comfortable interior and plenty of usable space. The simple but refined interior helps put the driver’s focus on the road, while the car’s excellent visibility makes it easy for drivers of nearly any type to find a solid position in the cabin. Acura, like Honda, engineers cars from the inside out, so the number of clever storage spaces and driver-centered controls are unmatched by the TL’s competitors.

While not a cavernous cargo carrier, the TL does manage to carry five adults rather comfortably, and its 12.3 cubic foot trunk has a large enough opening that filling its modest capacity is very easy. 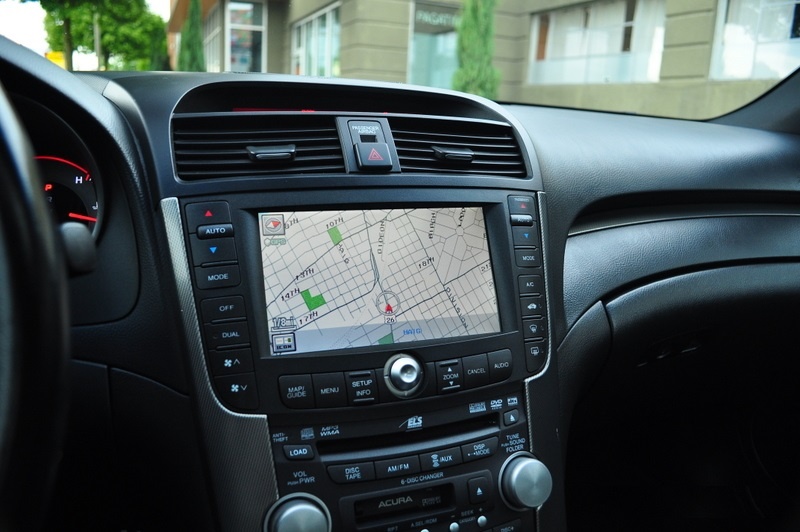 TL Type-S models come with navigation, which is a $2,500 option for the standard car. The navigation system uses a special 3D Solar Sensing Climate Control system that coordinates the sun’s position with that of the car to automatically shift climate control efforts to the part of the vehicle that is most heated by sunlight. 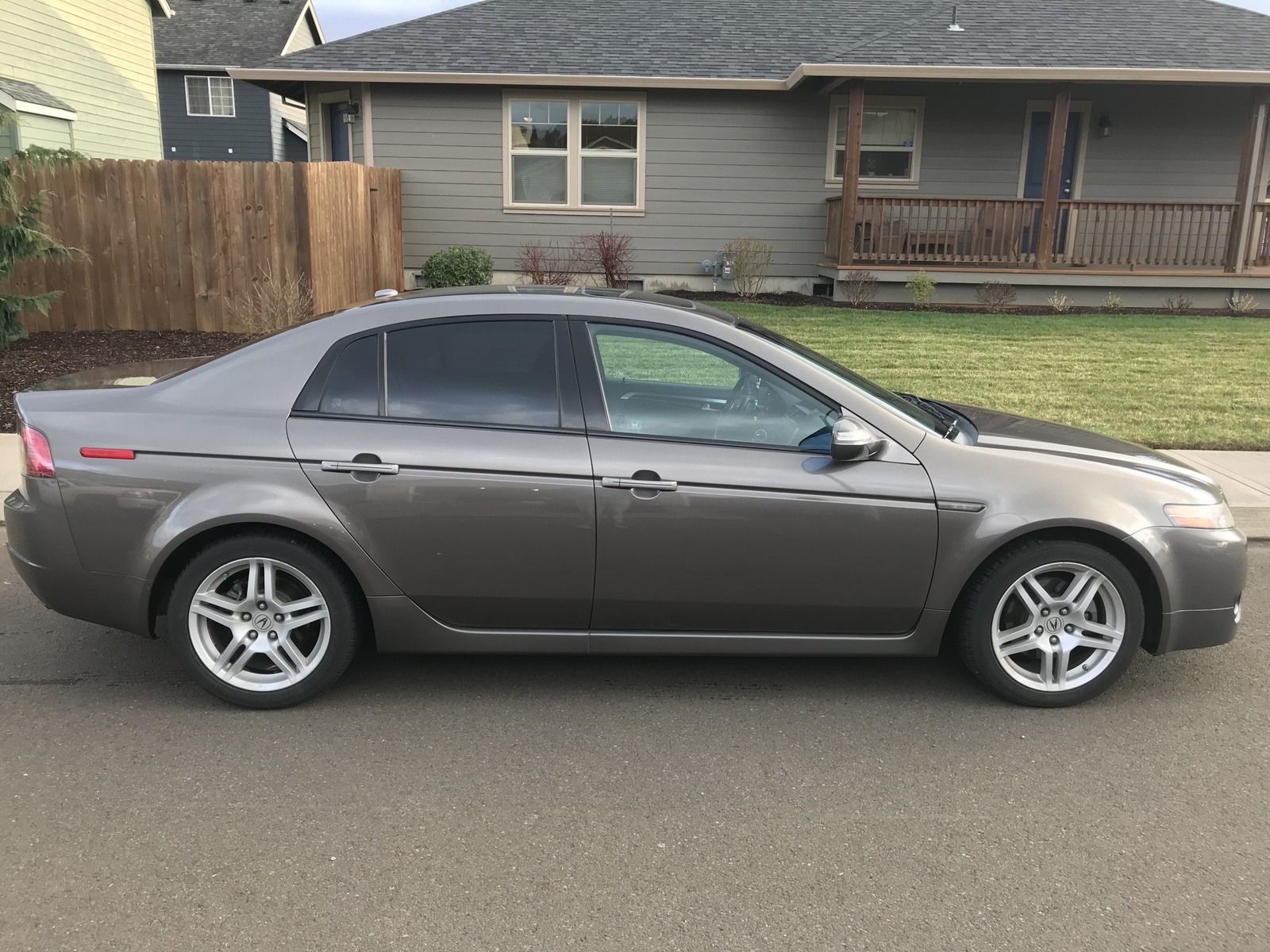 The Acura TL was awarded ‘Good’ ratings for moderate overlap front and side crashworthiness and received a ‘Marginal’ rating for its head restraints and seats from the Insurance Institute for Highway Safety (IIHS). 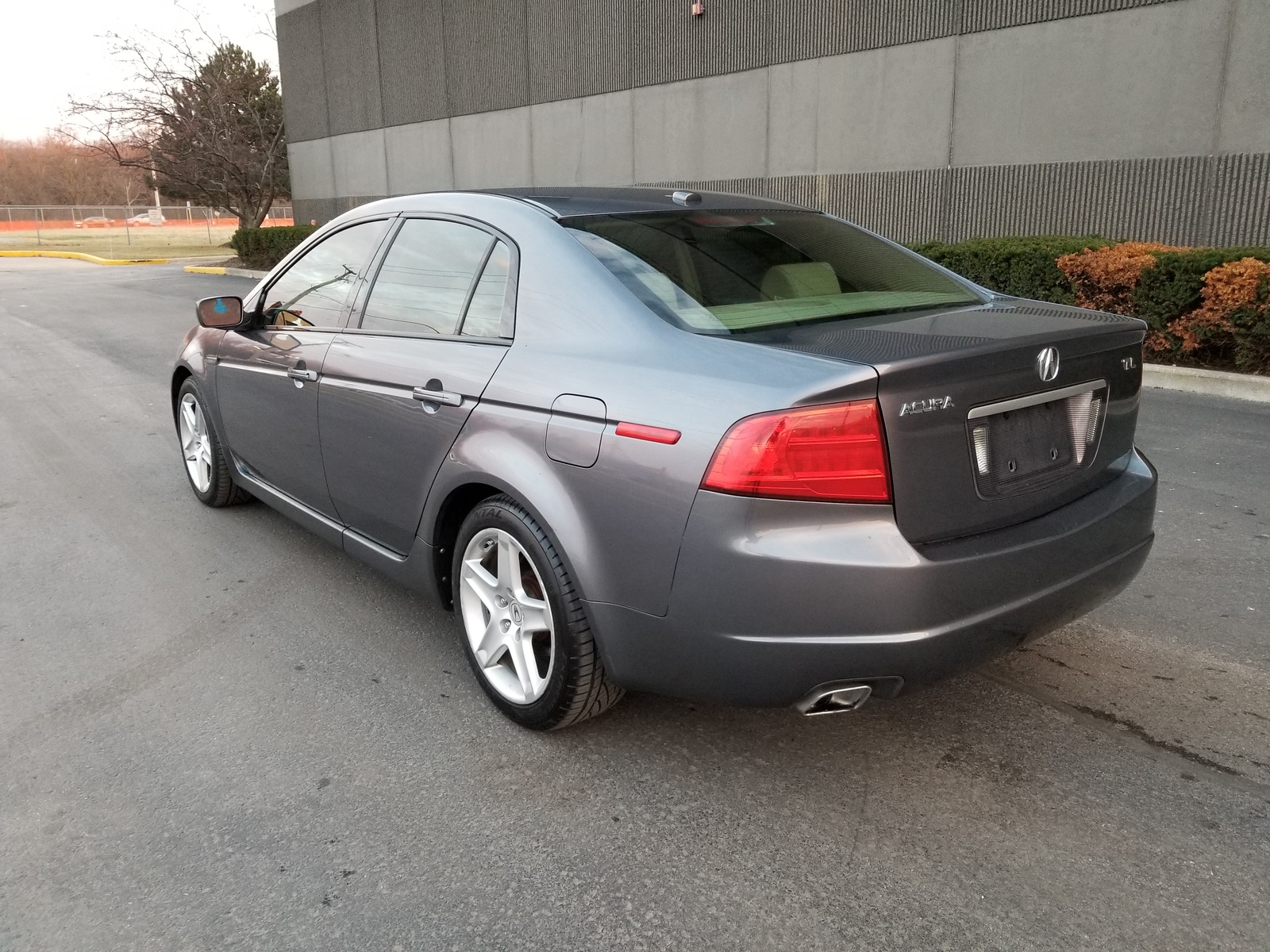 Perhaps the TL’s biggest issue is its position in the market relative to its price. With an MSRP of around $34,000, it’s cheap enough that high-end buyers of non-luxury cars will consider it, but it’s expensive enough that it bumps into luxury mainstays like BMW and Audi. The buyers for those cars shop heavily on brand and name recognition, which is a game that Acura will have trouble winning.

That said, people who do make the move to the TL will find an impressive mix of high-end materials, an exhilarating driving experience, and a sophisticated interior.

In terms of price, the TL lines up nicely with the BMW 3 Series but outperforms the BMW on many accounts until the uppermost limits of the 3 Series line. The TL Type-S, for example, is more comfortable and engaging than “lesser” versions of the 3 Series but can’t stand up to the M3’s brutality and speed.

In standard guise, the TL returns competitive fuel economy as well. Its 26 mpg highway rating beats less capable cars like the Subaru Legacy, while nearly matching the gas mileage numbers from cars like the Audi A4 and BMW 3 Series. Finally, it’s worth noting the Acura’s expected reliability ratings. In the luxury segment, it’s easy to find cars with projected repair numbers that significantly increase the cost of ownership over time. The TL is expected to be far better than average on repairs and repair costs, which greatly bolsters its value proposition.

Users ranked 2007 Acura TL against other cars which they drove/owned. Each ranking was based on 9 categories. Here is the summary of top rankings.

Charging System, Not Putting Out !

9 views with no answers yet
30

I have a 2007 Acura TL Type S. It was used as a commuter car for most of the time and has over 180,000 miles on it. I went to start it the other morning and it would not start (nothing happened. in...

Why Is The Website Not Letting Me Add Pictures

The website accepted my payment then stopped working from there

Clicking Sound When Trying To Start My Car

When I tried to start my car I just got a clicking sound when I turn the key in the ignition, after few minutes car started. The next day it seemed as if the battery was dying. I had to get a jump, ca...

731 views with 4 answers (last answer about a year ago)